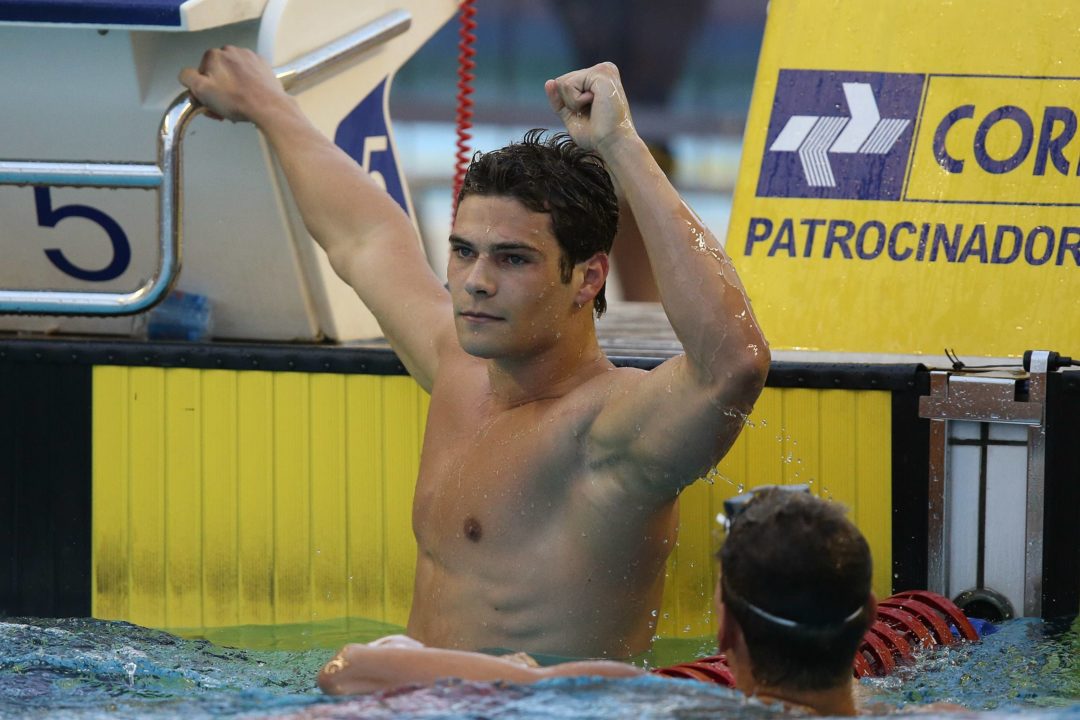 There's a new 100 free champion in Brazil, and his name is Marcelo Chierighini. (Photo: Satiro Sodre/SSPress)

A big thanks to D’Artagnan Dias for his continued support of our coverage of all things Brazilian swimming.

Auburn’s Marcelo Chierighini, who shares an alma mater with the greatest Brazilian sprinter ever Cesar Cielo, perhaps moved alongside Cielo as peers among the South American sprinters on the final day of the 2013 Maria Lenk Trophy in Rio.

Chierighini swam a lifetime best of 48.11 to win a Cielo-less 100 freestyle at the meet (though with Cielo so close off of his knee surgery, it might not have mattered). Chierighini, having just finished his junior season at Auburn, took another huge step forward at this meet in long course by nailing fown his World Championship qualifying in a second sprint event. He was out in a blazing 22.8 en route to this result.

Nicolas Oliveira from Minas Tenis and Fernando Ernesto from Corinthians tied for 2nd in matching 48.72’s. That’s another notable result from Ernesto, as it’s a second better than he’d been in the past; previously, his focus had been the backstroke races.

Bruno Fratus was 4th in 49.13 and Joao de Lucca was a 49.46 in an observed swim, both rather disappointing results. If the Brazilians opt to put Cielo on this relay, though he didn’t swim the final, it could finally be their big breakthrough in a relay that has struggled to live up to expectations in previous World Championship and Olympic meets. Having two guys flat starting 48.1 or better is a great start.

Oliveira and Ernesto will swim-off to determine the second individual spot for Worlds; that race will likely come in two weeks at the “Brazilian Championships.”

In the men’s 50 breaststroke, Joao Gomes swam a 27.20 that ranks as the fastest time in the world in 2013. The Brazilians have set brutal cuts in the 50 meter stroke races – to be precise, they are at the 4th-place results from the year 2012. That means Gomes is the only swimmer who hit it, as Felipe Lima (27.76) beat out Felipe Franca de Silva (27.78) for 2nd. Silva is the defending World Champion in the race, but will be unable to defend his title it seems.

Beatriz Travalon from Pinheiros won the women’s 50 breaststroke in 31.30, followed by her teammate Ana Carvalho in 31.74. That meant both were under the FINA Automatic Qualifying Time (nobody had come close in a women’s breaststroke race thus far at the meet), but because of the lofty 50 qualifying times none will go to Barcelona.

Unlike the 50, that means no individual qualifiers in this 100 freestyle, though an improving relay is forming with the top four going better than 55.80.

Joanna Maranhao won the women’s 200 backstroke in 2:13.42, and Leonardo de deus won the men’s in 1:57.77. For de Deus, that ranks among the top 10 times in the world this year and will qualify to swim in Barcelona.

Of note in those 200 backstrokes, Gustavo Louzada was a 2:03.65 in prelims, which is good enough for the World Junior Championships.

Despite the strong closing on the final day from Pinheiros, they were runners-up in the meet, nearly 500 points behind Minas Tenis. Minas won their 9th title (behind only Pinheiros and Flamengo with 13 each all-time).

It may sound like a broken record, but BRA needs to swim Cielo in the 400 FR/MR prelims.

When was the last time BRA got through to final of 400 FR in a major?

It just doesn’t seem right that a country with strong men sprint tradition like BRA is not in a final.

And risk Cielo dont performing well in his individual events?
Aswimfan, i know you follow some cielo races in the past,and know about his famous start and so, i will give you cielo this year starts(yes, its pretty bad-terrible for his standards-he even talked about in every interview he is gonna to train starts again for worlds):

With Chiereguinni I don´t think they will need Cielo for the MR..

for the FR this is another story.. But I think they may go with Chiereguinni/Nicolas/Fernando and de Lucca/Fratus as 4th member.. the slowest getting out to give Cielo a place at final.. if they qualify..

Morozov has much less advantage over Chierighini in LCM than in SCY. Or in another word: Morozov is less deadly in LCM.

I believe this Brazilian sprinter has a good profile for a gold medal in the 100 free or at least a podium at home in Rio. We’ll see but he still has 3 years to develop and to be the best.

Phillip.. but when morozov started swimming?

Chiereguinni “knew” how to swim.. but he just started training for real at 18 years old.. before that.. he started on a small club with 17 years only.. because one day his brother´s coach (who were a open water/triatlhon) asked him to do a splash and dash with his brother and he.. If he started sooner I think he would have been better already..

Could be true, same with Hanser. He only started swimming seriously in 2009 wasn’t it? If he started earlier, he would probably be among the best. Another reason to build their swimming programs so they can spot the talent earlier..

Hanser was a polo player until 2009.. at 2010, the first one where he really started training for swimming was the first time he broke 50 seconds
with a little tune only on his start and tune Hanser might be good enough to give a run for Adrian and Magnussen.. he probably is the phisically stronger there.. with the worst tech of all…

Phillip.. this is the start of the swimming on Pan AM

Hanser is obviously the one with worst start…when cielo was already hitting the water and Fraser already hit it.. his feet was just leaving the block.

He don´t need tune up.. if he learns how to start and translate the start power into water.. he would be scary..

With sixteen, Vlad was the best in the world(if i am not mistaken he has a 22.1 shiny suited time).Chieriguini begin in swimming for… VANITY.Yes, the swimmers have a good packed body and , as a teen, Chieriguini wanted one.
Its impossible compare with Hanser Garcia, because he was a TOP level waterpolo player.
Its worth to mention Chieriguini 100 free start, was much better than his 50 free start.

I have checked all the age rankings of Brazil, the first time Chiereguinni appeared was on 2008 with a 52.78 LCM 100 free (at November 2008 the time was already) he was almost turning 18 at that point.. can´t find anything about him before this event..

To provide a stepping stone for Rio, Brazil needs to start taking seriously the relay, even if they think they won’t win a medal. therefore yes, they should put Cielo in the prelims.

Relay quite sure will be Chiereguinni, Nicolas, Fernando and de Lucca/Cielo.

Fratus probably won´t go to worlds to focus on recovering his shoulder.