Charlotte Confirmed as May Host of Arena Pro Swim Series 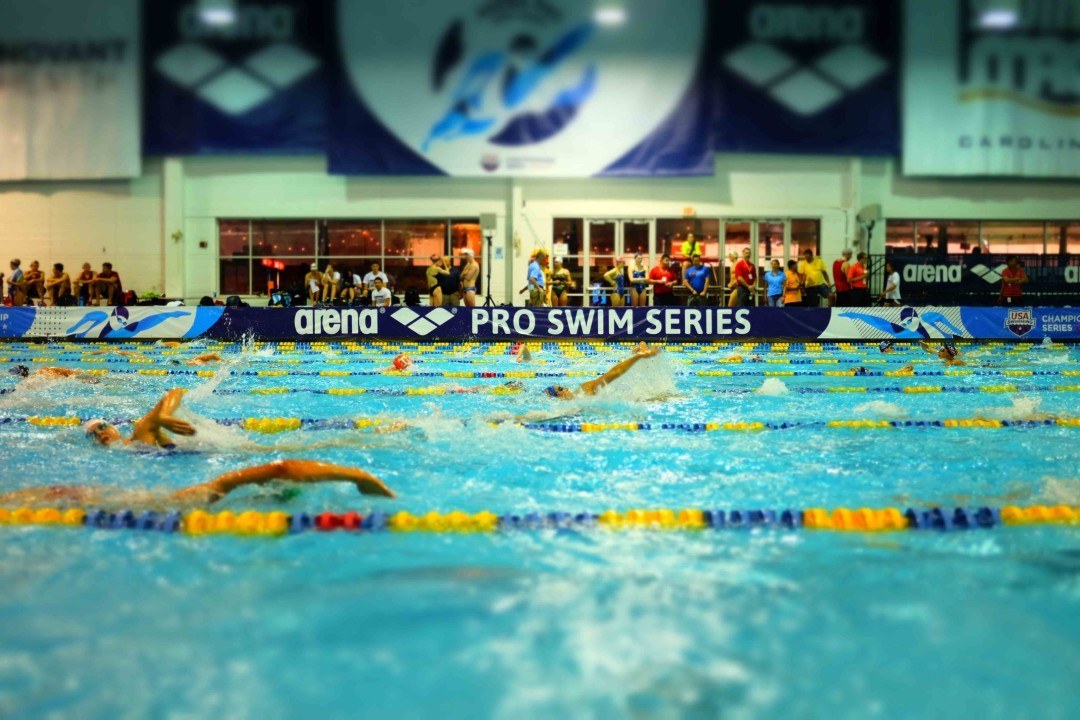 After several released versions, and a long-winded TBD on the May meet, USA Swimming has finalized plans for the 2015-2016 Arena Pro Swim Series, just three weeks before it's set to begin in Minneapolis. Archive photo via Mike Lewis/Ola Vista Photography

After several released versions, and a long-winded TBD on the May meet, USA Swimming has finalized plans for the 2015-2016 Arena Pro Swim Series, just three weeks before it’s set to begin in Minneapolis.

The May meet will go to Charlotte. That meet was under some uncertainty due to construction at the facilities that typically host the event, but it seems that USA Swimming is planning to host the meet at the usual Mecklenburg County Aquatic Center facility.

North Mecklenburg’s website says the construction was set to begin on June 1, 2015 and would last a year. That would theoretically keep the pool closed through the meet, but it’s possible the renovations are ahead of schedule, or that the facility could be open for the meet even as the finishing touches are being put on the construction project. We’re awaiting word from USA Swimming on the specifics of the meet.

Beyond that, the series appears unchanged from our July report, which noted the addition of an Indianapolis stop and competing meets on the same weekend in Santa Clara and Indianapolis. National Team Director Frank Busch addresses those changes in the full press release below.

The meet dates and sites for the seven stops of the 2015-16 Arena Pro Swim Series – all long-course meters competitions – include:

“Heading toward 2016, the elite-level competition provided by the Arena Pro Swim Series will be critical as our athletes build toward next summer’s U.S. Olympic Team Trials,” said Frank Busch, USA Swimming’s National Team Director. “These seven meets will give fans the unique opportunity to see many of the world’s top swimmers in action, competing alongside local age-group standouts, before they watch them in the 2016 Olympic Games in Rio.”

“The simultaneous meets in Indianapolis and Santa Clara to conclude the Series will allow athletes to minimize their travel for a final tune-up before Olympic Trials open in Omaha later in the month,” Busch added.

As part of USA Swimming’s partnership with swimwear leader Arena, the circuit will feature a record $350,000 in overall prize money. Swimmers may earn awards for top-three finishes in all individual Olympic events across the series. At each meet, $1,000 will be provided for a first-place finish, $600 for second and $200 for third. In addition to the single-event prize money, the overall male and female winners of the season-long Series will earn a $10,000 bonus.

For the third consecutive season, longtime USA Swimming partner BMW will award the grand prize of a one-year lease of a BMW vehicle to the highest-scoring eligible male and female U.S. swimmers. Olympic medalists and repeat winners Conor Dwyer (Winnetka, Ill.) and Caitlin Leverenz (Tucson, Ariz.) earned one-year BMW leases for topping the U.S. rankings at the conclusion of both the 2013-14 and 2014-15 seasons.

As it did throughout the 2014-15 Arena Pro Swim Series, the Universal Sports Network will air more than 15 hours of exclusive live coverage of the series this season. Complete broadcast details will be posted when available at usaswimming.org and universalsports.com. In addition to the broadcast coverage on the Universal Sports Network, USA Swimming will webcast prelims and finals from each meet on usaswimming.org.

Entering its fourth year as the title sponsor, Arena strives to improve the fan experience at every Arena Pro Swim Series event through a number of exciting on-site activations. Designed to strengthen the connection between today’s youth swimmers, future National Teamers and their heroes and role models, Arena utilizes the Pro Swim Series to help expose the sport of swimming to a wider audience and give those closest to it even more to love.

“All of us at Arena are thrilled with the extraordinary success of the past three years and excited to show the swimming community – fans and athletes alike – what we have in store as the Arena Pro Swim Series enters the Olympic year,” said Tim McCool, Vice President and General Manager for Arena North America. “There couldn’t be a more exciting time to be the title sponsor of this series and exclusive outfitter of the USA Swimming National Team. We can’t wait to unveil the surprises we have in store for 2016 as our nation’s best prepare to represent our country on the biggest stage.”

Male and female overall Arena Pro Swim Series champions will be honored at the conclusion of the 2015-16 series based on the number of points accumulated throughout the seven meets. Participants will be awarded points in each individual Olympic event throughout the duration of the Series (Five points for first, three for second, one point for third place). Dwyer and Hungary’s Katinka Hosszu won the 2014-15 overall series titles for the second straight season.