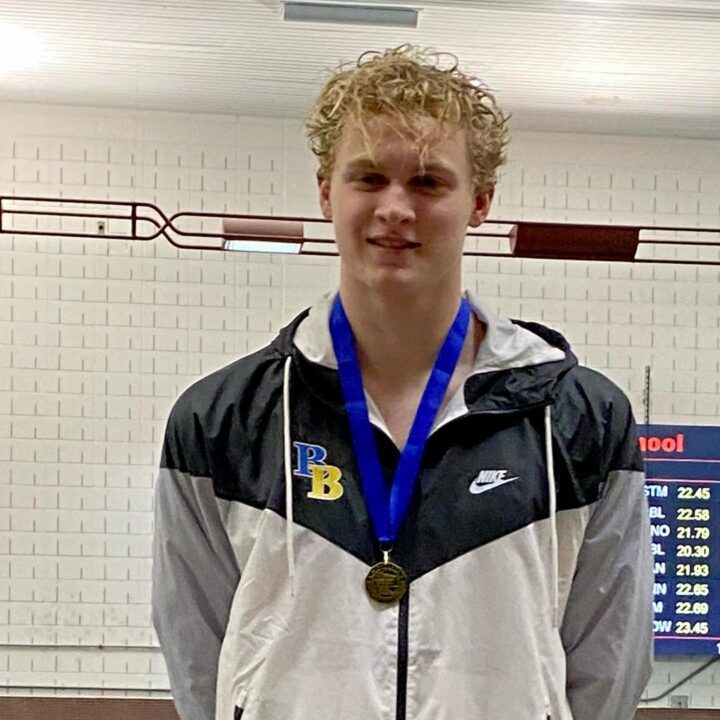 University of Texas commit Charlie Crosby swam the fastest high school time in the nation in the 50 free this season at the Minnesota Class A Meet. Archive photo via The Breck School

The Breck/Blake Co-Op team, which is the combined effort of teams from the private Breck School and Blake School in Minneapolis, dominated the 2022 Minnesota Boys’ High School State Championship Class A meet.

Class A includes the state’s smaller high schools. Even with the combined efforts of two schools, the Breck/Blake Co-Op still only includes only about 1,000 students in grades 9-12.

This marks a 6th-straight team title for the Co-Op, and their 8th Class A title since 2009. This year’s win was a particularly dominant one: the Breck/Blake boys finished with 495.5 points. They crushed the runners-up from Alexandria Area High School, who had 203 points.

The team started off by winning the first 4 events of the meet. Their streak wasn’t broken until Chisago Lakes senior Storm Opdahl won the 1-meter title: his 3rd straight. He will dive for Missouri State next fall.

Among the hot start for Breck/Blake was a new all-classes State Record in the 50 yard free. There, senior Charlie Crosby posted a 19.57 to win his third-straight Minnesota State title.

Crosby has dropped big time in each season of his high school career, including breaking 20 for the first time at last year’s meet when he won in 19.87.

For Crosby, that swim breaks his own Minnesota Class A and all-time, all-classes records of 19.87 from last year’s meet. Edina’s Peter Larson is the only other swimmer to have broken 20 seconds at a Minnesota High School State Championship. The two will be teammates next year at the University of Texas, where Larson will be a senior and Crosby will be a freshman.

His swim is also the fastest by a high school swimmer this season.

Crosby also won the 100 backstroke in 46.64. That’s another three-peat for him, and a 5th-straight title in the event for Breck/Blake swimmers, though he was just-off his own all-time, all-classes record of 46.41 set last season.

Crosby also bookended the meet with relay leadoffs. In the 200 medley relay, he swam 21.59 to lead Breck/Blake to a new Class A Record. The splits:

The only leg where they didn’t have the fastest split on that relay was Gabriel’s anchor, where he was .22 seconds slower than St Anthony Village anchor Liam Neary.

The team won by over 7 seconds, and just missed Minnetonka’s all-classes record of 1:29.20.

Completing the front-half sweep for Breck/Blake was senior James Pan, who won the 200 IM in 1:48.12. That marks a second-straight title for him, though his swim was a big off the 1:47.90 that he won with last year that remains the Class A Record.

After diving broke the Breck/Blake momentum mid-meet, Hutchinson sophomore Conner Hogan picked up a win in the 100 fly. He was the runner-up last year. This is Hogan’s third State Championship meet in Minnesota after qualifying in 2020 as an 8th grader.

Breck/Blake picked up a win in the 200 free relay even without their top swimmer Crosby. This was by-far the closest margin of their three relay wins, though it was also their youngest relay with three non-seniors.

Alexandria Area High was 2nd in 1:26.44, including a pair of 20.5 second splits from Nicolas Welle and Carter Holm.

Yes, this team is two schools. That said, other teams field more swimmers in Class A. The major difference is the number of swimmers on this team that swim year round. Most of the kids on this team swim club during the offseason. This team is small but powerful and looks to be so for a few more years (all be it closer with the loss of these seniors). With state record holders aplenty this year, this was a special year and the team showed it.

If you want to talk about competitiveness, look to the Alexandria team. They sent an even smaller group to the state meet and stood their ground against every other Class A school but the… Read more »

Fastest team and fastest swimmer in Minnesota. They beat the winner of the large school meet in a duel meet. They should move up to large school division. Small school division is meant for out state small cities – not for elite private schools. Have won 6 years in a row – enough is enough.

Even more reason to move up

he suffered the wrath of sussy

This is entirely satirical and also look up the context for yourself, but he had both a good 50 free and 50 back leadoff. Too bad he said that he was going to break the National HS record in the 100 back and raise the steaks. If he didn’t say that I would be talking about his 50 free and how it’s the 7th fastest ever in high school competition and also being in the top 10 in the 100 back but don’t make promises on the internet you can’t keep Charlie especially in the face to sussy. Anyways good job

But did he break the National highschool record in the 100 back?

That was funny but the dude had gnarly drops. I believe he was like 20.3 and 48 low before.

45.0 split from a freshman, too… Liking the MN to TX pipeline that’s developing 😀

yeah that 45.0 split from a high school freshman is DISGUSTING

These minnesota kids never swim much faster for Texas than they did in high school. It seems to me that Texas is great at recruiting but not getting their recruits much faster?

Part of that may be on the individual

0
0
Reply
JeahBrah
Reply to  Washed up