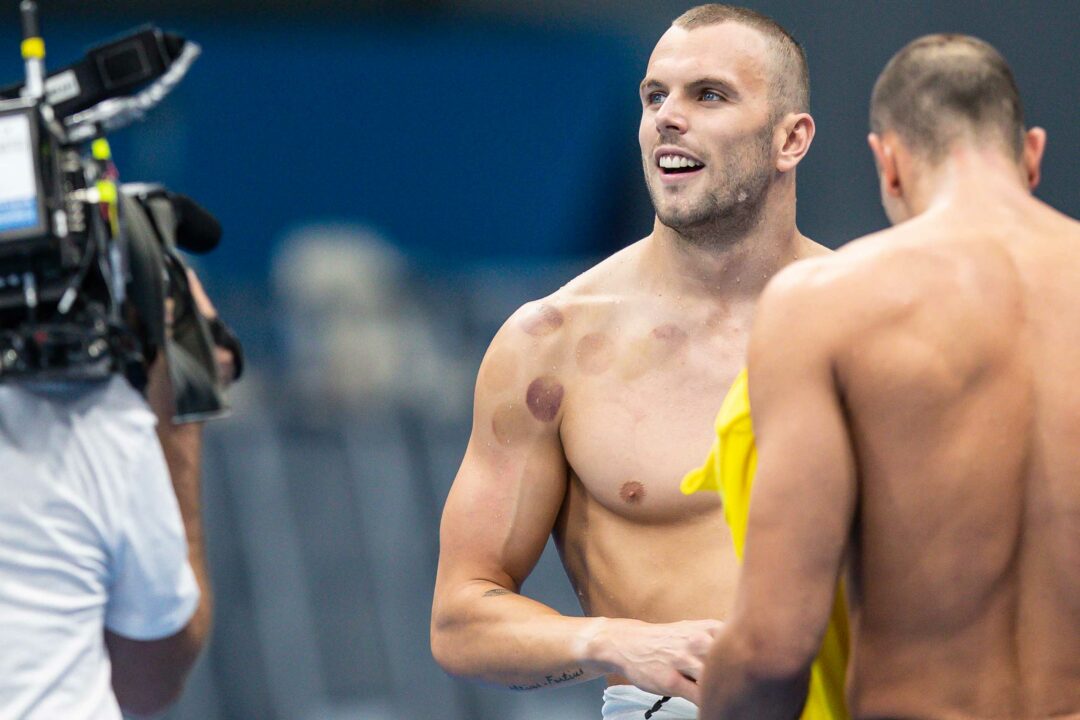 Although no official squad is being sent, Kyle Chalmers and Holly Barratt are reportedly representing Australia at the Short Course World Championships. Archive photo via Jack Spitser/Spitser Photography

Olympic finalist Anastasia Gorbenko (above) is among seven Israeli swimmers picked for Abu Dhabi and the 2021 Short Course World Championships.

Although Swimming Australia is not sending an official roster to this year’s FINA Short Course World Championships, Kyle Chalmers and Holly Barratt will both be representing the green and gold in Abu Dhabi next month.

In August of this year, we reported how Swimming Australia would not be sending an official roster to the biannual event due to the country’s international travel restrictions and subsequent mandatory quarantine requirements related to the coronavirus.  However, qualified swimmers able to travel on their own would still be able to race at the meet.

At the time then-Swimming Australia CEO Alex Baumann said, “For those athletes that still wish to attend and meet the selection criteria, we will provide a level of support to assist in travel and accommodation for the meet.”

According to Swimming World’s Ian Hanson, 2016 Olympic gold medalist Chalmers and national record holder Barratt will be the sole swimmers making the trek to Abu Dhabi.

Both Chalmers and Barratt are coming off of competing across the whole of the 4-stop FINA World Cup Series. Additionally, they both race for International Swimming League (ISL) squads about to enter the playoff stage for season 3. Chalmers is a key member of London Roar while Barratt is one of the Aqua Centurions’ weapons.

The fact that Chalmers will indeed be in Abu Dhabi is of extra significance in light of the fact the 23-year-old just broke the short course meters World Record in the men’s 100m freestyle.

At the final stop of the aforementioned World Cup, the multi-Olympic medalist busted out a time of 44.84 to break the longstanding record of 44.94 Frenchman Amaury Leveaux put on the books in 2008.

Although Chalmers will still have the likes of speedsters Zach Apple and Ryan Held of the United States with which to contend in the men’s 100m freestyle, his primary rival of Caeleb Dressel will not be in attendance.  Dressel and Chalmers were separated by just .06 in the long course meters version of the men’s 100m freestyle in Tokyo, with the American taking gold.

At the 2018 edition of the World Short Course Championships in Hangzhou, China, Australia finished 7th in the overall medal table, amassing 12 medals, including 2 gold. The golds came from Ariarne Titmus as she topped the 200m and 400m free podiums.

The 2021 edition of the SC Worlds is set to see a 50% increase in prize money for individual medalists. The announced $2.8 million USD prize pool is well above the $2.07 million up for grabs at the previous SC Worlds.

The proofreading on swimswam can be hit or miss sometimes.

What about the Japanese team?

A commentator mentioned yesterday, that they will send 5 swimmers or so. Is Daiya Seto going to SC Worlds?

Seto, as well as four others including matsumoto katsuhiro will be representing japan

Will they be able to be home for Christmas if they have to quarantine for two weeks?

Now that we know titmus isn’t swimming at SC worlds for sure, I don’t really see her swimming till Aussie team trials for 2022 worlds

Titmus did several print interviews and broadcast after resuming training. She never mentioned short course worlds. Her emphasis was 6 months of hard training and the Commonwealth Games. The 2022 world championships seemed like an afterthought. Titmus conceded she didn’t expect to be as fast in 2022 as in Tokyo. However, she sounded more enthused about the 800 than previously. That surprised me. I thought she might drop it. The close finish in Tokyo apparently caused her to realize Ledecky is vulnerable at the distance. Frankly Titmus should have understood that last year. That race was winnable if she had more confidence.

Don’t think you need to criticise her 800. She did very well. First Olympics remember.

She has swam faster then anyone in history not named Ledecky (who is a freak), so I think she did really well in Tokyo.

If USA swimming doesn’t take the SC Worlds that serious as LC Worlds/Olympics then FINA qualified Americans should be able to go on their own just like Australia. Lot of prize money up for grabs for professionals than to waste it on NCAA swimmers who can’t accept it

What countries are taking it more serious than USA? What I have read, the biggest swimming powers are sending skeleton squads if none at all.

I’m not saying anyone is taking it serious. If you’re not, just let your top SCM FINA qualified swimmers go on their own.

If you don’t have selection rules, it becomes CHAOS! If you don’t like the selection process, get involved and change the rules! Just make sure everyone can qualify if they want to try and qualify!