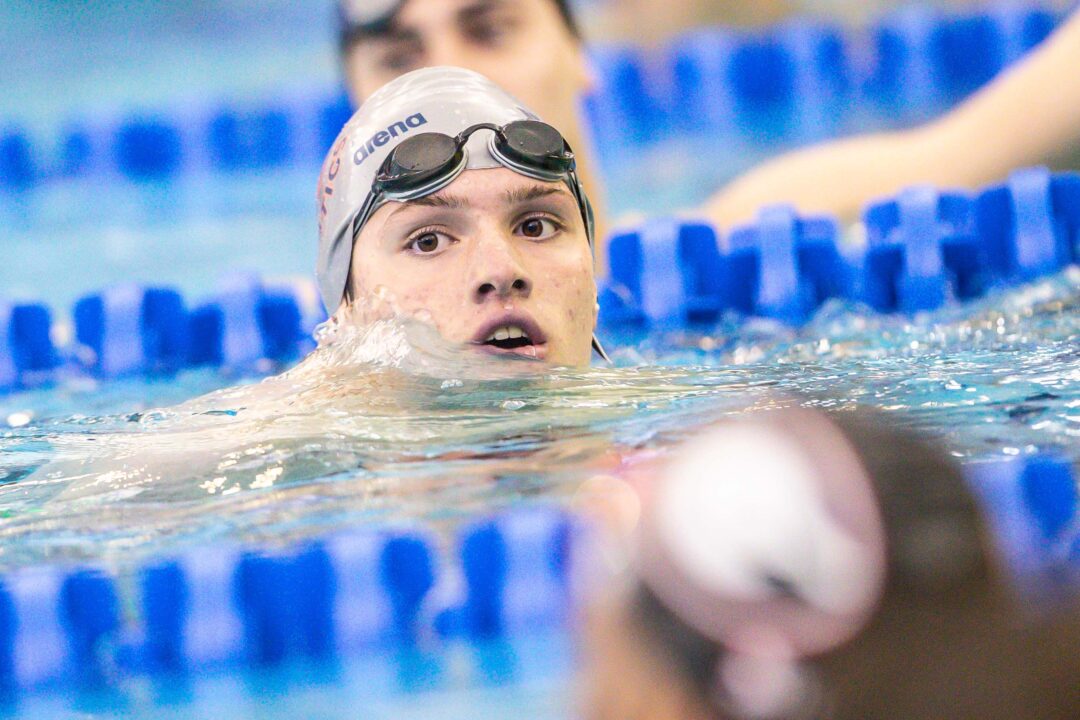 15 year-old Thomas Heilman was part of a total of four victories on the second day of the Virginia Long Course Senior Champs. Archive photo via Jack Spitser/Spitser Photography

A day after the college swimmers generated the biggest swims, 15 year-old Thomas Heilman came up big tonight with wins in two individual event and contributing to a pair of relay wins as well.

In the first event of the evening, the 200 free, Heilman touched in 1:52.36, almost three seconds ahead of the rest of the field. Despite that margin of victory, it wasn’t even a personal best for Heilman, whose fastest time still stands at 1:51.27 from last December.

Cavalier ended up sweeping the men’s events. Rising UVA sophomore Matthew Styczen is representing Cavalier Aquatics here, and he won the 400 IM with a new lifetime best of 4:32.47. That’s his first best time in the event since 2019, when he went 3:42.47 as a 16 year-old.

On the women’s side, TIDE came away with victories in three of the five events of the day. Stanford commit Kayla Wilson started off the evening by winning the 200 free in 2:01.44, touching ahead of UVA’s Ella Nelson (2:02.11). Wilson won the B-final final in this event at the US Trials this spring with a lifetime best of 1:58.81.  She also contributed to TIDE’s victory in the 200 free relay today, anchoring in 25.21 en route to a total time of 1:46.55.

Wilson’s current TIDE, and future Stanford, teammate Samantha Tadder won the 400 IM in 4:54.69. That’s about nine seconds away from her lifetime best, but enough to win by over five seconds.

UVA’s Gretchen Walsh went 58.64 in 100 fly to earn her second individual win of the meet after taking the 100 free yesterday. She wasn’t too far off of her personal best tonight, which stands at 57.43 from the Dynamo LC meet in March 2021.

The Coast Guard Blue Dolphins women took the final event of the day, the 400 medley relay, by nearly three seconds with a time of 4:16.89