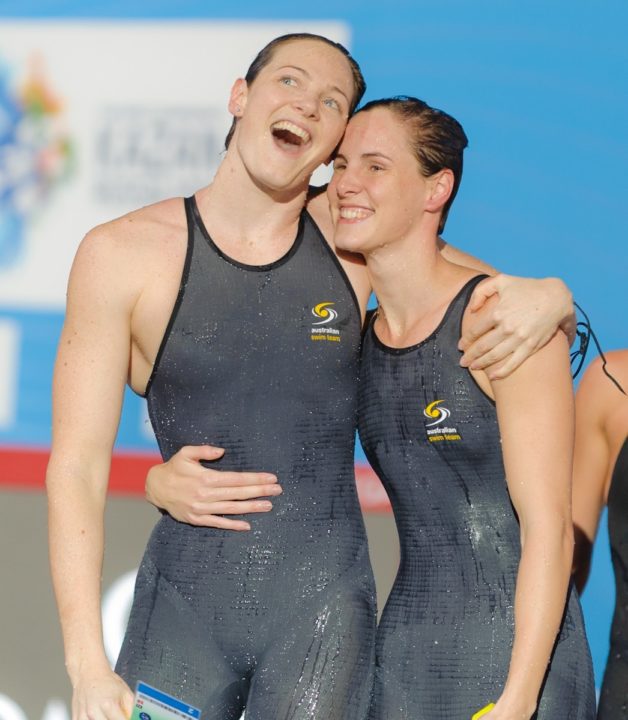 After a rousing first day at the 2014 Australia Grand Prix 2 in Brisbane, day 2 had many of the... Archive photo via Victor Puig

After a rousing first day at the 2014 Australia Grand Prix 2 in Brisbane, day 2 had many of the same themes, with the women’s freestylers stealing the show.

The second day of this event designed for the best-of-the-best was all finals, with only three swimmers advancing from each prelims into the A-Final.

Even with that requirement pushing swimmers to really charge the heats, swimmers were still able to get faster on Saturday.

The biggest times came once again from the Campbell sisters. Cate, the defending World Champion in the 100 free, won that race here in a 52.70, and her younger sister Bronte Campbell took 2nd in 53.27.

That’s the second-best swim in the world this season for Cate Campbell, sitting behind only her own 52.68 from Nationals in April, and those two continue to have the rest of the sprint world quivering at their potential on a 400 free relay.

Meanwhile, in the women’s 200 free individually, 20-year old Emma McKeon was able to knock a little bit off of her prelims time with a 1:56.83 to secure the win. Many of her competitors came down with her, as Bronte Barratt from St. Peter’s Western was a 1:57.83 for 2nd.

Winning the B-Final in 4th-place overall was a phenomenal time from Mel Schlanger in 1:57.29. That’s the second-best time of her career, and two-and-a-half seconds better than she was at Australian Nationals two months ago. Though she might not have technically earned a spot on the Commonwealth Games 800 free relay for Australia, that swim might be enough to prove that she’s worth a second look anyway.

Giving a modest leeway of two seconds for relay starts, the aggregate of the four best times from this meet is only about a second shy of Australia’s silver-medal winning time from Worlds last year. Add in Alicia Coutts and some rest, and the Australians could chase their own National Record this summer.

Speaking of Coutts, her one individual event win on Saturday came toward the end of the meet with a 2:14.66 in the 200 IM – more than a full second add from prelims on Friday. As much as anybody on the Australian Commonwealth Games squad, she looks like she’ll need to rest prior to Glasgow.

We’re not quite sure what it means, but Katie Goldman was a 6:11.25 in the women’s 600 meter free final. What little context we have is that this is a medal-winning split to an 800 free at Worlds last year (Ledecky and Friis were both right around 6:11), though of course tagging on another 200 meters is a task not to be taken lightly. It’s certainly a good position for her medal chances at the Commonwealth Games and Pan Pacs.

On the men’s side, the freestylers were the big story as well, and the sprinters came alive on Saturday after a bit of a sleep walk on Friday. James Magnussen, the Commonwealth favorite in the event, swam a 48.77 to win and break the Grand Prix Record. He split a classic Magnussen swim, out in 23.63, back in 25.14, and beat Kenneth To’s 49.56 and Jayden Hadler’s 49.86 in the three-swimmer final.

Meanwhile, in the men’s 200 free, the fastest time didn’t come out of the A-Final. Cameron McEvoy swam a 1:47.82 – a five second drop from a poor prelims performance – to win the B-Final. That was better than Daniel Smith’s 1:48.54 in the A-final that would follow for the official title.

Mitchell Larkin swam a 1:57.13 to win the men’s 200 back. He had a breakthrough at Nationals with his 1:55 in this event that ranks him 4th in the world, and is now starting to back that swim up with this 1:57-low in-season.

Kenneth To took the 100 fly in 53.38, topping a well-fought race over Hadler (53.50) and Tommaso D’Orsogna (53.75). All three were in nearly a dead-heat throughout this race, and other than a slight D’Orsogna fade, it was just the touch of To that got to the wall first.

And finally, Daniel Tranter, who we said on Friday was really looking very good on his weaker front-half IM, got a good confidence-boosting win on Saturday. He swam a 2:00.47 to not only break the Grand Prix Record, but to beat Thomas Fraser-Holmes by .01 seconds. Tranter beat Fraser-Holmes in this race at Nationals as well, and though he left himself more ground to make up here than in April, the key continues to seem to be how close Tranter can get to his competitor on the front-half of this race.

Closing the meet was a mixed 3000 free. This is another event without great context, but by manipulating some times, we can come up with at least one interesting point. Jarrod Poort, an open water swimmer by trade who was 5th in the 5k at Worlds last year, actually negative-split his 3000. He was out in 15:18.7, and came back in 15:17.7. While a 15:17 isn’t impressive on its own, coming with no rest after a 15:18 is.

This is good for Magnussen, he doesn’t need swim a 47 yet. just go out there and swim good races, save the 47 low for when it matters.

Daniel Smith is impressive. I think he could be in the mix the Australia’s 800 free relay for Kazan and Rio. I think Mcevoy, Fraser-holmes, Horton, and either Mckeon or Smith could challenge the WR in Rio.

Mcevoy, putting up a respectable 1:47
Anyone know what happened to Spenger? he swam the 50 breast in 30.something and didn’t swim anything else