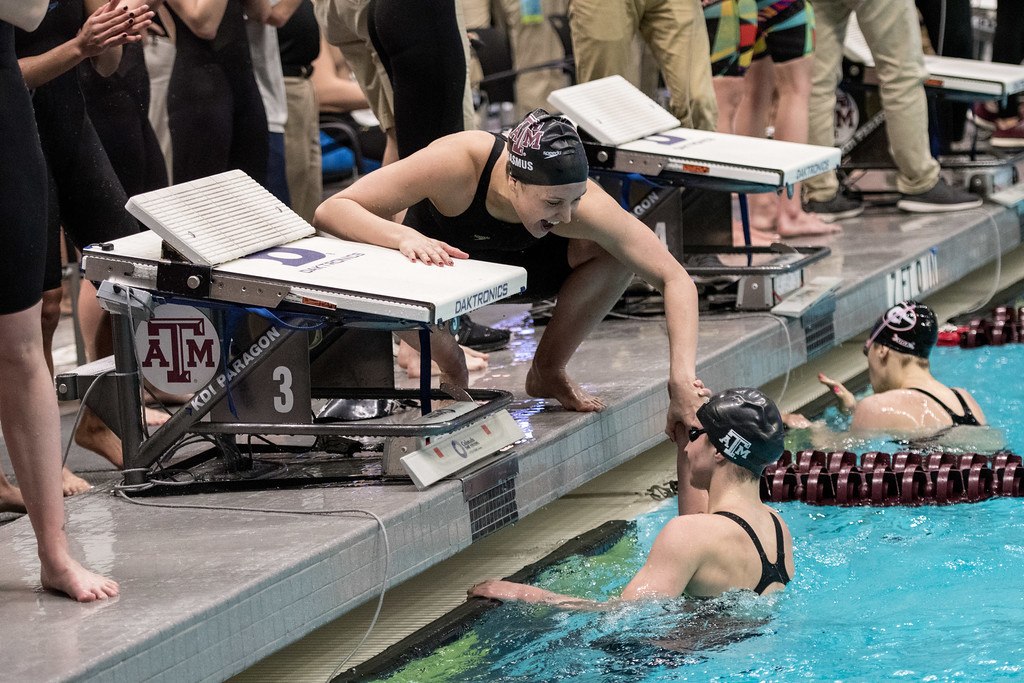 Host Texas A&M leads on both the men's and women's sides of the competition after the first day of the 2018 Art Adamson Invitational. Current photo via Thomas Campbell/Texas A&M Athletics

Host Texas A&M leads on both the men’s and women’s sides of the competition after the first day of the 2018 Art Adamson Invitational.  While the meet doesn’t have quite the same firepower

Sydney Pickrem anchored in 22.13 as Texas A&M won by a comfortable 0.81 margin over LSU.  The Aggies’ time of 1:30.25 moves them up to tied with Cal for the 4th-fastest time this season, although it’s still almost a second short of a NCAA provisional time, and about 1.6 second short of a qualifying time.

A well-balanced Aggies squad threw down at 1:16.81, which is exactly 1.5 seconds faster than any other team had been this season heading into today.  Shaine Casas led off in 19.59, which is 0.03s faster than Bowen Becker, who previously had the fastest individual 50 free time this season. Adam Koster, Clayton Bobo, and Mike Thibert all split between 19.03 and 19.14 as the Aggies’ “A” team won by over 2.5 seconds.  That’s also the first men’s relay to hit a NCAA qualifying time this season.

With teams like Indiana and NC State competing this weekend, the Aggies’ reign atop the rankings may be short-lived, but their time tonight was still a second faster than their time from last year’s NCAAs, where they finished 19th in prelims.

This meet may not be quite as fast as it used to be, but College Station saw nation-leading times in consecutive events, as Hawaii’s Phoebe Hines dropped another second this evening after taking the number seed in this morning’s prelims. Her time of 4:38.11 moves her ahead of Penn State’s Ally McHugh and her time of 4:39.63 from last weekend’s ACC-Big Ten Challenge.

The times weren’t quite as impressive, but the racing was closer in the men’s 500 free, as Felipe Rizzo held off a late charge from teammate Mark Theall to win by a mere .04s, 4:20.26 to 4:20.30. Rizzo split 25.46 over the final lap, while Theall charged home in 24.76 to nearly nip Rizzo for the win.   Texas A&M freshman Mark Schnippenkoetter couldn’t quite match his time from this morning in lane four, taking 4th as part of a 1st-5th sweep for Texas A&M.

We’ve got yet another nation-leading time, this time courtesy of Texas A&M’s Sydney Pickrem.  Her 1:53.88 tonight is over a second faster than Beata Nelson’s time from last weekend, as well as Pickrem’s own 1:54.70 from this morning. Tonight, Pickrem was about six-tenths off of her time from the 2018 NCAAs, where she finished 4th.

The Aggie women held seven of the eight spots in the A-final, with LSU’s Nicole Rozier being the sole exception.

Aggie freshman Shaine Casas has punched his ticket to his first-ever NCAA championship, courtesy of 1:43.06 in the 200 IM that’s the 2nd-fastest time so far this season. Casas came into today with a lifetime best of 1:47-mid, meaning that he’s knocked a whopping four and a half seconds off his personal best in one day. His time tonight is almost a second faster than what it took to get a NCAA last season, although NCAA championship times haven’t gotten so batty that he would’ve been just out of scoring range.

LSU’s Haylee Knight brought a win to a third team this evening, winning the 50 free by a comfortable margin over Texas A&M’s Raena Eldridge. Knight’s time of 22.29 is just one-hundredth faster than last season’s NCAA invite time, putting her right on the bubble currently.

Boise State’s Abbey Sorensen came very close to getting her school’s first top-three finish of the night, but ultimately was touched out by LSU’s Summer Spradley, 22.94 to 22.95.

Casas chose to focus on the 200 IM this evening after posting the fastest time in both events this morning, and with him gone, his three 200 free relay teammates duked it out for the title tonight. We mentioned earlier how Koster, Bobo, and Thibert were all within 0.11s of each other on the 200 free relay. That apparently was no fluke, as they touched within an even tighter margin tonight, with a 0.07s spread between Koster’s 19.69 and Thibert’s 3rd-place 19.76.

To make things even more interesting, LSU’s Matthew Klotz only missed 3rd by 0.01s himself, taking 4th in 19.77, and meaning there there was a total of 0.08s separating 1st from 4th. Klotz’s time tonight established a new American Deaf Swimming record, breaking the record he’d set earlier in the day.

Karoline Hajkova put Hawaii in the lead early on with a 52.76 ahead of Pickrem’s 52.99, but Anna Belousova closed the gap with the only sub-60 breaststroke split in the field. Taylor Pike and Claire Rasmus held the lead, as Texas A&M won in 3:33.64, good for a NCAA provisional cut, and the 2nd-fastest time so far this season.

The Texas A&M men took the final race of the evening by over four seconds.  The Aggies got a sub-52 split from their breaststroker Benjamin Walker and a 42.15 anchor leg from Koster. That’s over 5 seconds faster than the previous best time this season, and their time tonight was faster than their time from last season’s NCAAs. Hawaii’s Olli Kokko almost broke the 52-second mark as well, splitting 52.08, as Hawaii took 2nd, now giving them the 2nd-fastest time this season.

How does A&M have the fastest 4medley time by over 5 seconds if Hawaii finished 4.15 seconds behind for second place? Does that also mean Hawaii has the second fastest time in the country?

Good point. Clarified that now, thanks.