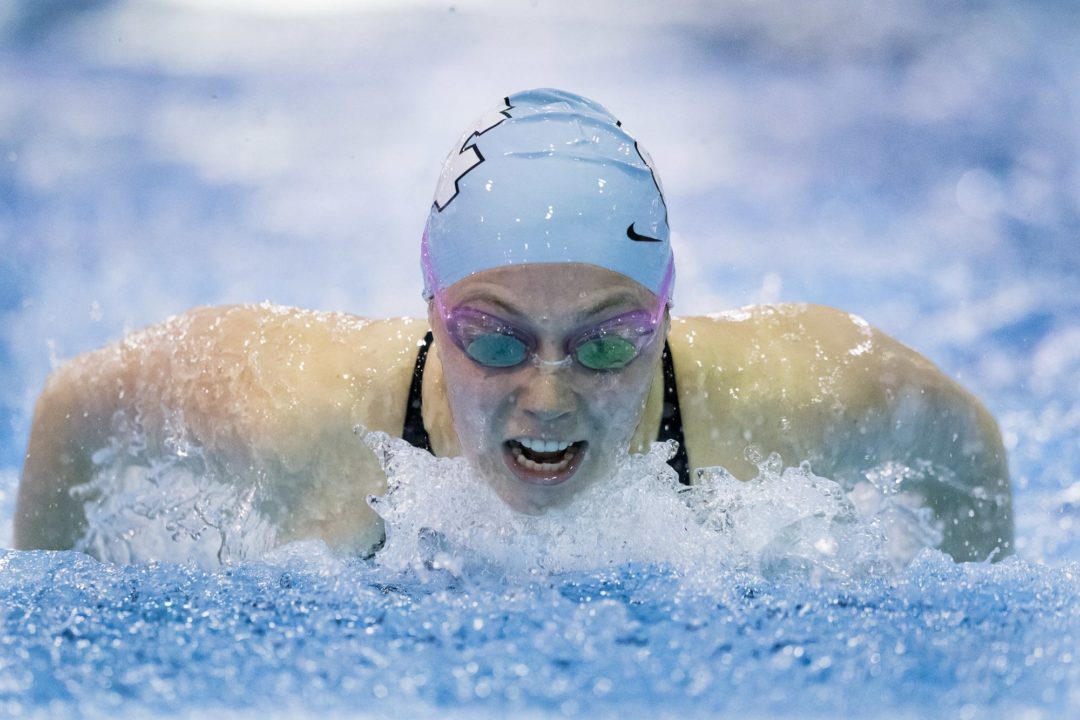 Both the Tar Heel men’s and women’s teams are looking for redemption after the close defeats at last season’s openers against none other than the Bulldogs, in a meet held in Athens. Current photo via Tim Binning/TheSwimPictures.com

Isabel Ivey will race for Pac-12 titles in the 100 fly and 100 back double tonight as Cal is projected to out-score Stanford in the pool.

Redshirt senior Javier Acevedo led a group of four Georgia swimmers who advanced to the ‘A’ final of the 200 backstroke on Day 4 at SECs.

The University of North Carolina men’s and women’s swimming and diving teams are set to kick off the 2016-17 campaign Friday when the Tar Heels take on the University of Georgia at the Maurice J. Koury Natatorium.  The meet begins at 2 p.m.and admission is free.

Tar Heel head coach Rich DeSelm, who took over the Carolina programs in 2007-08, says, “There are a lot of story lines that make this meet so interesting. There was this fall’s football game (Georgia and UNC’s football programs kicked off this year against each other at the Chick-Fil-A Kickoff Classic in Atlanta), the argument about which school was the first state university founded in the U.S. and other bragging rights between venerable institutions, but at the end of the day it is all about finding out where you are at in terms of racing or diving and then going back to work the next Monday.”

The Bulldogs’ will come to town boasting a fifth-place team finish at the 2016 NCAA Men’s Championship, while the Georgia women’s squad will arrive with seven national championships to their credit.  The UGA women have won three of the last four NCAA titles, including in 2016.

Both the Tar Heel men’s and women’s teams are looking for redemption after the close defeats at last season’s openers against none other than the Bulldogs, in a meet held in Athens. The UNC women were nipped by a narrow four points in that encounter.

It proved to be a successful stint on the recruiting trail for the Carolina side a year ago, as the Tar Heels inked a host of new team members who will be thrown into the fire in their opening meets. In addition to the freshmen, DeSelm says, “We also have three new transfers who are going to be very impactful on the men’s side. Craig Emslie hails from South Africa, Jordan Merrilees is from Australia, and Michael Meyer is another one from South Africa.”

While swimming is a hot topic, it cannot go unnoticed that the diving group returns two All-Americas in Elissa Dawson and Jack Nyquist. “Abel Sanchez our diving coach has done a great job and he as well as the divers have taken things up a notch in terms of our diving performances,” says DeSelm.

This is Carolina’s first of two back to back Southeastern Conference match-ups, as the Tar Heels will travel to Knoxville in just a few short weeks to take on the Tennessee Volunteers.

Be sure to check out the interview above, in which Coach Rich DeSelm discusses renewing the rivalry with Georgia, Tar Heel swimmers and divers, as well as expectations for the season.

Live Stats from Friday’s meet can be found on GoHeels.  The link will go live on Friday afternoon just before the start of the meet.