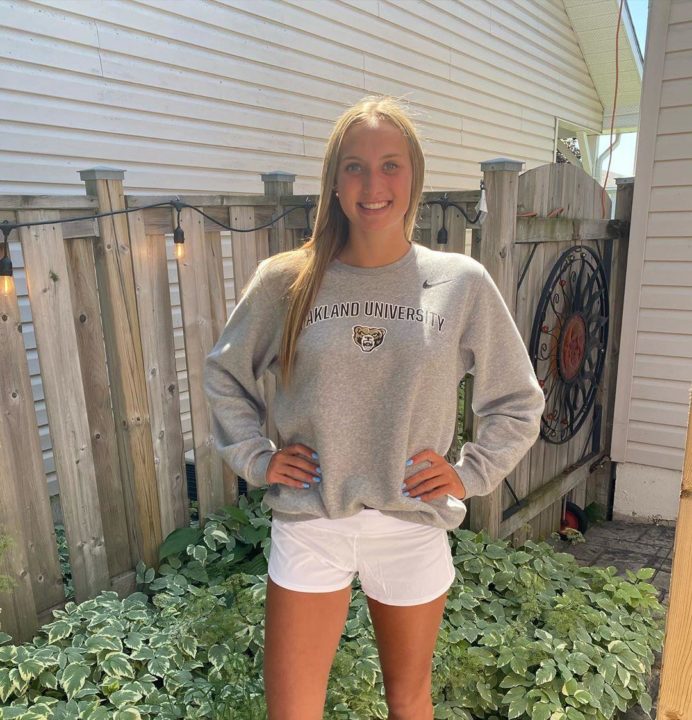 Ontario's Logan Belanger has announced her commitment to Oakland University. She will arrive on campus in the fall of 2021.

Logan Belanger, a native of Sault Sainte Marie in Ontario, Canada, has announced her verbal commitment to travel to the United States to attend Oakland University beginning in the fall of 2021. She swims with the Sault Surge Aquatic Team.

I am very excited to announce my verbal commitment to Oakland University! Thank you to Coach Peter and Stacy for this great opportunity! I would also like to thank my family and coaches for all the support throughout this process! I’m looking forward to being a Golden Grizzly and everything that Oakland University Swimming & Diving has to offer me.

Belanger is one of the top breaststrokers in Ontario. Last season she ranked as the third-fastest 100 LCM breaststroker among 16-year olds in the province.

Last March, at the 2020 Winter Ontario Youth-Junior Swimming and Diving Championships, she clocked a new lifetime best of 2:33.45 in the 200 IM (LCM). That time was good enough to earn 11th at the meet.

Oakland swimmers were also awarded the Swimmer of the year award (Susan LaGrand) and Freshman of the Year (Emily Aycock). LaGrand was the conference champion in the 200 back and 200 IM while Aycock won the 200 free and 1650 free.

Last season Oakland was dominant in the breaststroke events, taking 1st and 3rd in the 100 and 1st through 4th in the 200. They were led in both by current senior Sydney McDowell. While McDowell will have graduated before Belanger arrives on campus, Oakland’s second-best breaststroker will not have. Taylor Bailey took 3rd in the 100 breast and 2nd in the 200 breast last season. She will have one year of overlap with Belanger after she arrives on campus next fall.

Belanger will be joined by fellow Ontario native Ajete Eggers as members of the class of 2025.

I believe Mackenzie lipnick is committed to Cleveland state not Oakland.