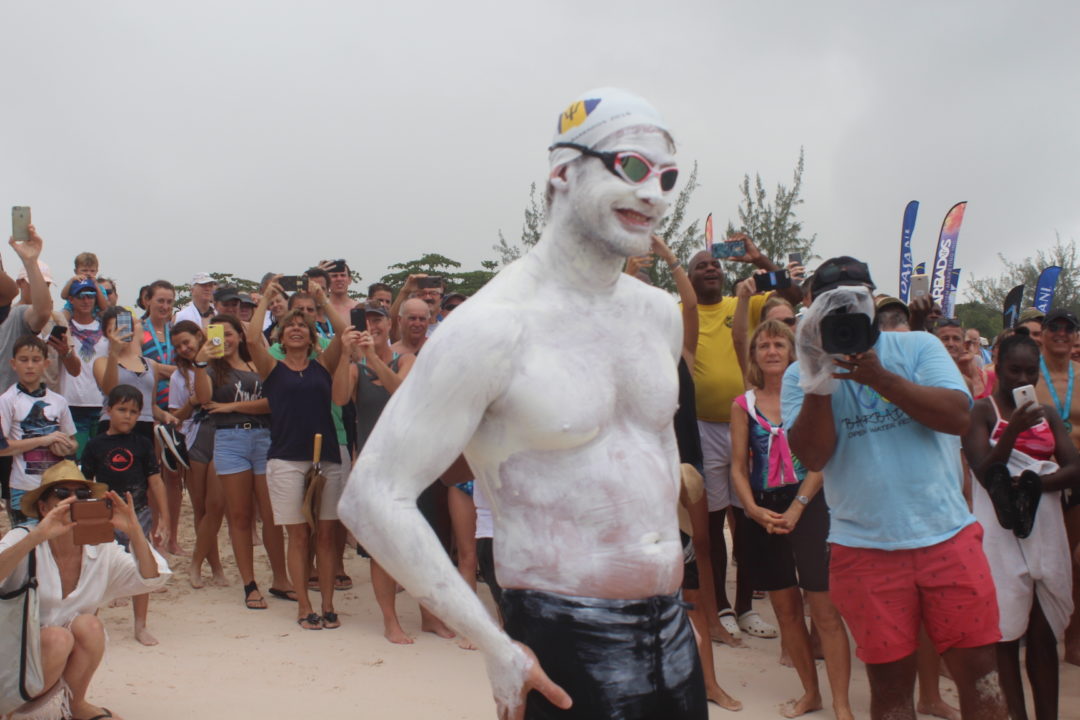 France’s Marc-Antoine Olivier won the only stop of the FINA Marathon Swimming World Series this year, then followed up with a French title in September.

14-year-old James Savage has become the youngest person to complete the 18.6km Around Coronado Open Water swim, finishing in a course record of 4:23.00.

Cameron Bellamy had a phenomenal year in 2018. First, he completed his six-year journey to swimming seven of the toughest channels in the world, earning himself the title of Oceans Seven swimmer.  Then, he created history by completing a highly complex circumnavigation of Barbados, swimming a grueling 96K around the jagged coastline. In November 2019 the endurance athlete extraordinaire will return to Barbados for the 8th annual Festival following his planned Cuba-Florida swim attempt.

This will be his most daunting challenge to date, an attempt to swim 103 miles from Havana, Cuba to Key West in September 2019. The incredible and almost unimaginable undertaking will require immense dedication, highly intensive training and detailed planning.

A few have managed to break through and claim the world’s attention. Ross Edgley’s 2018 staged swim around Great Britain, which has been named the longest staged swim ever is one.  The 33-year-old adventurer covered a distance of 1780 miles, swimming up to twelve hours a day and then sleeping on his support boat.  He attracted major sponsorship from Red Bull, which perhaps is a positive sign for the sport as several solo marathon swimmers receive product sponsorship but find financial sponsorship hard to come by.

Frenchman Ben Lecomte attracted attention as well in 2018 with his plan to swim 9,100 km in a staged swim across the Pacific to bring attention to the issue of plastic in the ocean. The awesome effort had to be abandoned after a storm severely damaged his support boat.

On the other hand there are massive efforts by others in recent years such as Sarah Thomas (168 K swim), Chloe McCardel (124K swim) and Cameron’s Barbados swim that didn’t enjoy the level of recognition that they deserved.

Barbadians were certainly fascinated by Cameron Bellamy and his arduous training schedule in island’s waters leading up to his Barbados swim in 2018. Its likely only a handful of people in the world that can swim for twenty-four hours on a stretch. Yet Cameron swam laps of Carlisle Bay for that length of time as a practice swim to gauge how his body would stand up to prolonged exposure to warm salty water.  His successful swim around the island was an achievement of epic proportions and earned him the accolade of the 4th longest solo sea swim ever from the Marathon Swimmers Federation. The fact that he failed in his first attempt but returned a mere 8 weeks later and succeeded made the unbelievable feat even more impressive. Most people cannot imagine someone swimming for 40 hours and 43 minutes, indeed support crew on the boat witnessed the spectacle and still found it difficult to process.

Truthfully, this outstanding accomplishment transcended the sport of solo marathon swimming as it really was an extreme test of physical and mental endurance. Thousands of people, both swimmers and non-swimmers tracked the swim live and possibly in disbelief, from all over the world.  At some point swimming technique likely took a second seat to sheer determination to overcome the effects of 40+ hours of repetitive motion, warm salt water and no sleep. Months later, people on the island are still talking about the “man from South Africa that swam for two days and went all the way around the island”.

If you delve deeper into the Cameron Bellamy story you will learn that his athletic endeavors in rowing, cycling and swimming were originally inspired by his highly commendable desire to assist in enabling children in some of the poorest areas of his homeland – South Africa. This led to the birth of the Ubunye Challenge, a well-established charity that has provided hundreds of children with access to early childhood education.  You will also learn that all of his feats to date have been self-funded (yes, he has a day job in cyber-security) with 100% of charity donations going directly to projects on the ground in Africa.

It will be a great privilege for the Barbados Open Water Festival to have this highly talented athlete return to the 8th Festival in November (6-10).