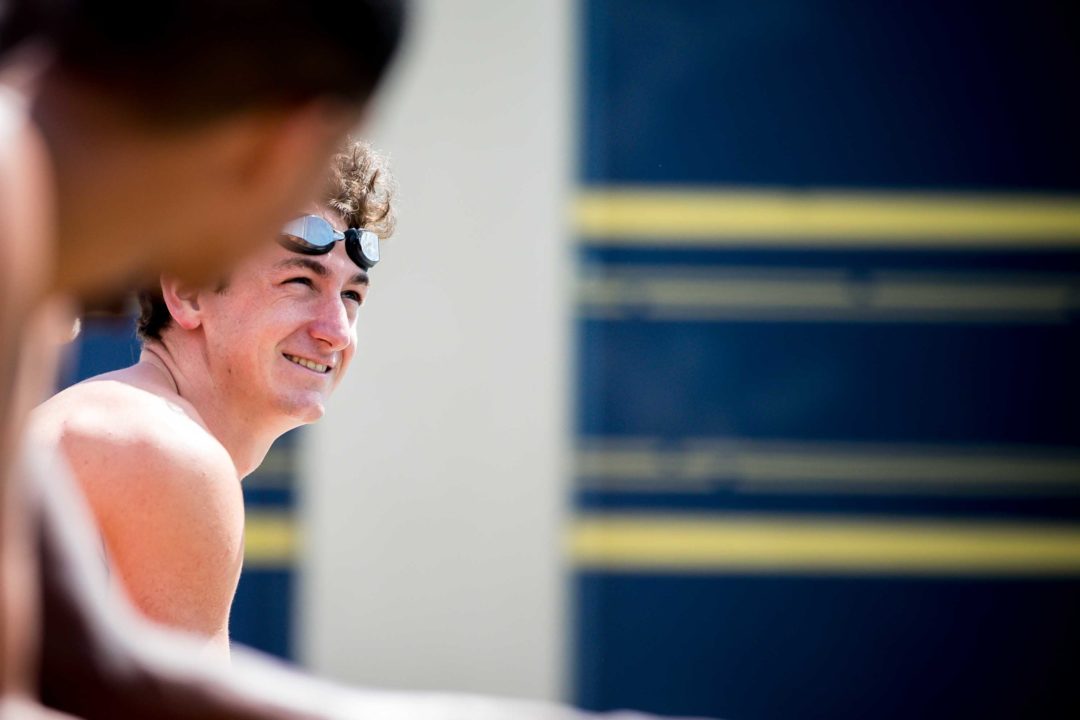 Hoffer has been a preeminent short course sprinter for years. But he still managed a breakout season his junior year at Cal. Archive photo via Jack Spitser/Spitser Photography

After Ryan Hoffer was named Arizona Boys Swimmer of the Year in 2014, his coach called him “one of the most talented swimmers in the U.S. right now.” Five years later, that’s still the case – but by his own accord, the 2019-20 NCAA season was Hoffer’s breakout performance.

“I really narrowed down to specifics,” Hoffer told SwimSwam of his strategy this year. “I built off my sophomore year – our National Championship win – and we kind of found what was working for us. So going into Pac-12s, my mindset was ‘all right, I’m going to try to do what I want to do what I want to do at NCAAs in terms stroke count, kick count, how I look, how I breathe in the water.’ All of that kind of fell together and I felt like my rest was kind of starting to pick up. And we were definitely looking forward to NCAAs… It’s a real bummer.”

After NCAAs were canceled, the Bears quickly shifted their focus forward to the 2020 U.S. Olympic Trials and long course season.

Of course, Trials were quickly scrapped as well. But Cal had been “sprinkling” in long course training in preparation all year.

Hoffer’s long course performance has lagged behind short course – he finished the 2018-19 season outside the top 40 nationally in the 100 free – but he had high hopes for this summer.

“The great thing about Dave [Durden] being the Olympic head coach is he’s always got the mindset for long course, a little bit,” Hoffer said, adding that the team did long course doubles twice daily for two weeks at the Olympic Training Center in December.

For now, Hoffer is doing what he can to stay in shape. He first went to his girlfriend’s house in southern California, where there’s some home gym equipment, and will next head to his uncle’s house in Arizona, where there’s a 20-yard pool.

“All of our team is super motivated to stay in shape, and we can build some things, and we’re kind of in that beginning phase again where we’re building back up from all that rest from Pac-12s,” Hoffer said. “So [Dave] definitely keeps us on top of what we need to do.”

Though it’s not common for Cal men’s swimmers, anyway, Hoffer confirmed that he won’t be taking an Olympic redshirt season as a handful of rising seniors did last season.

“I’ve always done better moving with the team and I feel like racing is a crucial part to my development,” Hoffer said. “In the swimming world, of course there’s meets around the world, but you don’t get as much racing as a collegiate season. Racing and perfecting what I do in competition is where I find myself more comfortable improving.”

As a senior next year helping his team back from these unprecedented times, Hoffer says he’ll look to the incoming freshmen for incentive.

“We know every year our freshman come in, it brings some more enthusiasm. Our freshmen coming in would definitely keep us motivated, and I hope that I can guide and lead our freshmen, as well as the rest of our team into a successful season,” Hoffer said. “The toughest part is starting, and I feel like we will get little a head start with this time off.”

Hoffer in a 20 yard pool will be insane.

Would love to see him suit up and see what he can put up for a hundred.

He’d probably have to be careful not to get injured on turns. 5 meters isn’t enough to slow down to a safe speed after his breakout

Really wanna see Hoffer do well, maybe in the ISL if he can’t ever translate to LC