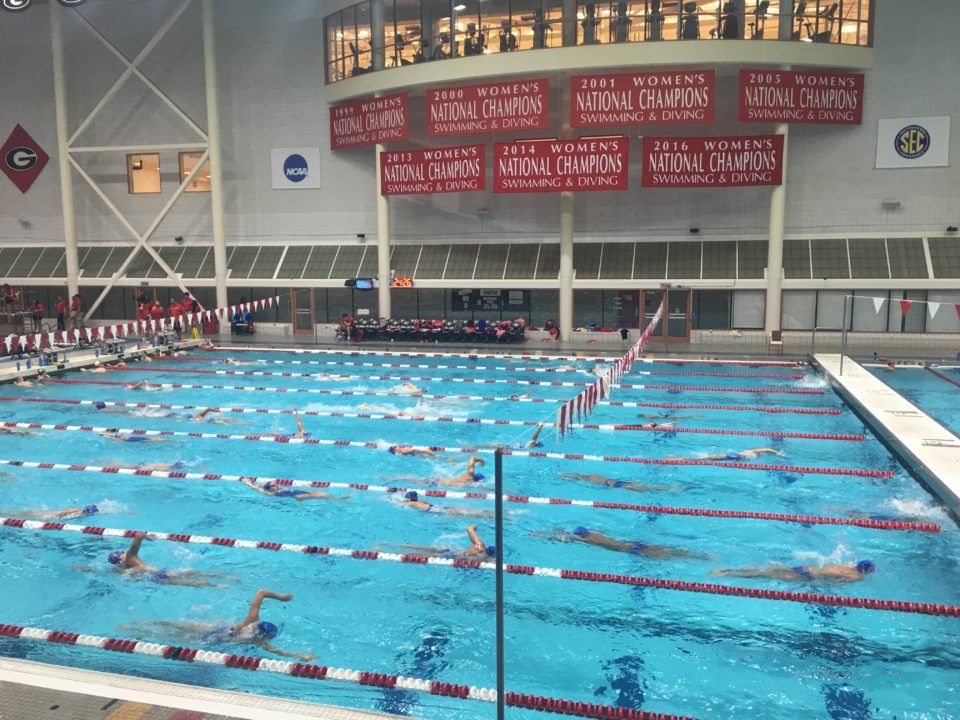 Versatile freestyler Teagan Cheney from Northern California will head to Athens, Georgia, to suit up for the Bulldogs in 2017. Current photo via Eli Noblitt

California’s Teagan Cheney will travel across the country next fall to begin his collegiate career as a Bulldog at the University of Georgia.

The Blonde Bommer Teagan Cheney commits to Georgia. One of the best programs in the country just got better. We are proud of u @teagancheney pic.twitter.com/ScdynpFSzF

Cheney, who has shown rapid improvement over the last two seasons, has four winter juniors cuts and one summer juniors cut.

The fast-rising freestyler has best times of:

Cheney is a valuable pick-up for the Bulldogs, who have had trouble in the past recruiting sprint freestylers for their men’s team. That reputation appears to be changing with the recent success of freestylers Michael Trice and Matias Koski, who graduated last season. Trice finaled in both the 50 (19.16 in prelims) and 100 free (42.35 in prelims) at last year’s NCAA Championships. The 400 free relay also got 5th overall, with all four legs sub 43 seconds. The lead-off leg, Koski, was recruited as a distance specialist, but became an NCAA scoring threat across almost every freestyle distance. After Koski won the mile in 2015, he claimed 2nd in the 200 (1:31.54) and 12th in 100 free (42.56) at the 2016 NCAA Championships.

The Bulldogs seem to have broadened their search for sprint talent outside their native Southeastern region, nabbing current freshman Javier Acevedo from Canada, commit Camden Murphy from Michigan, and now Cheney from California.

so impressive! what a champ

Wow…must be a natural swimmer. Going from pedestrian to high end times on around 2 years…probably has seom room to drop a good deal more.

So, still a huge improvement!