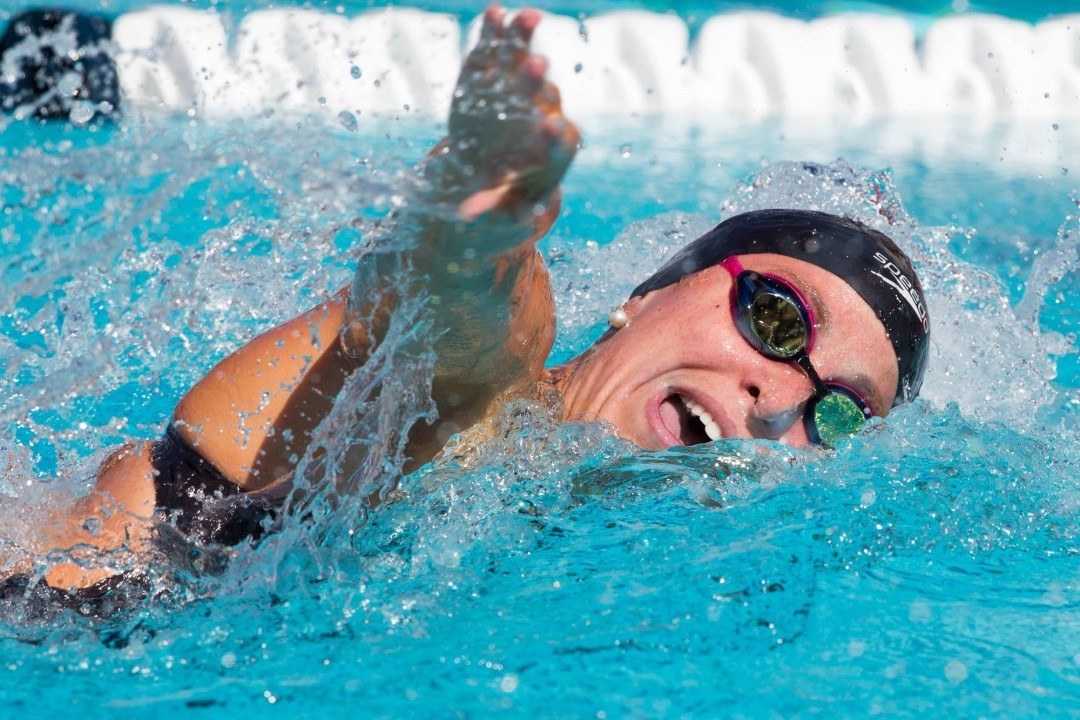 Kaylin Bing was one of Cal's top scorers, winning the 50 free and the 200 free relay. Archive photo via Tim Binning/TheSwimPictures.com

The Cal Golden Bear women won their first official dual meet of the season, topping Pac-12 foe Oregon State with their stars winning some unique events. The final score was 156-97 in favor of Cal.

We didn’t need another reminder that Missy Franklin is tough as nails, but we got one anyway when the sophomore swam back-to-back races early in the meet. Franklin, now appearing fully healthy after back spasms limited her this summer, was the runaway winner in the 200 free, going 1:48.24. That’s the event in which Franklin broke the American record last year.

She came back to take second in the next event, the 100 back, by just a tenth. Franklin was 55.78, but the win went to Hawaiian freshman Jasmine Mau, who went 55.67 to take the event.

Marina Garcia, in her second season out of Spain, won the 100 breast in 1:03.05, just ahead of freshman Maija Roses. Roses jumped atop the 200 breast, though, going 2:20.39. Freshman Noemie Thomas continued to impress in the butterfly, going 54.05 to win the 100-yard event. Thomas, a Canadian, was about a half-second off her season-best, which sits 6th in the NCAA.

As has become tradition lately, Cal heavily split its relays. Bing was the top performer in the free relay, putting up the team’s only 22-second leg with a 22.97 on the end of the winning 200 free relay. In the medley, Missy Franklin‘s 25.7 backstroke split was probably most notable, though her team wound up 3rd overall. Osman split 23.58 on the butterfly to propel her team to the win.

Well, I may be the only one out those commenting so far who actually WENT to the meet in Berkeley. When you see Runge, a top distance swimmer (actually 200 to 1650 free) swim an event in the backstroke, you know that Teri and staff were letting a lot of people swim different events or distances. Different coaching philosophy than USC and other schools getting better times this early in the season.

As someone stated here, this was a dual meet not an “invite” and Cal was mainly swimming against themselves albeit Harrison swam well in the distances for Oregon State.

USC and Stanford look like early favorites for the PAC12 conference, but Cal will be there come February… Read more »

Dual meets are not the destination. Dual meets are a part of the journey.
Swimmers are not robots. You don’t put in a quarter and get the results you (as a pundit) want.

Swimnerd – I’m a huge Stanford fan, but please, just stop! You’re making the rest of Nerd Nation look bad. No matter what the results, you are overly critical of Cal. Let It all work itself out….

Thank you for posting that, Pac12Fan…much appreciated! I’m a huge Cal fan, but I will always support the amazing swimmers and coaching staff at Stanford. Meehan is a top-notch guy who has earned his solid reputation. The swimmers have faith in him, rightfully so. Stanford is going to be the team to beat for many years, I’d say, and probably starting with this year. Georgia and Cal are also in the mix for this year, without question, though Stanford might have an early season spotlight on them. Stanford is loaded with incredible talent, and will only get better next year.

The sport of swimming should be the focus, with the desire for all teams to challenge one another in… Read more »

Slooow times even for this early in the season. Yawn. Cal’s deficiencies in the distance & breast continue to be a liability.

Wait til tomorrow for some eye popping swims when Oregon will get crushed by the Card.
Simone, Hu & co are gonna provide some entertaining fireworks then I can guarantee you!

Those are actually very good early in the season, you don’t know how hard they are training. I would love to see you go out there and do that since you are such a swim “nerd”…

USC split their team and took a small contingent to the SMU Invite where they only managed to place 4th.
Yet their top times were MUCH faster than Cal’s across the board.

Are you aware that at the OSU vs Stanford dual meet last year, the Stanford team didn’t have anyone within 10s in the 1000 compared to Harrison, and the 500 wasn’t even close. Stanford is not strong in distance either. When the reigning PAC-12 champion posts one of the fastest 1000 times of the season so far, it’s obviously a good meet, especially when the win was only by 3 seconds. Your “swimnerds” have something else coming.

1. you’re comparing USC’s invite times with Cal’s dual meet times
2. even if these times were comparable, it’s too early in the season for the times to mean anything. one reason being that swimmers swim off events early in the season. and teams also mix up on relays to even them out.

Facts often don’t speak for themselves. You need to put them in the right context and know how to use them.

With that said, great times from USC women. I’m not taking anything away from them but the purpose of the dual meets right now isn’t to go as fast as you can. One thing I’ll agree with you is that Cal women have… Read more »

LOL i love you swimnerd.

yes…but it is getting tiring!

I’m marveled at swimnerd’s consistent and devoted attack of CAL and Teri.