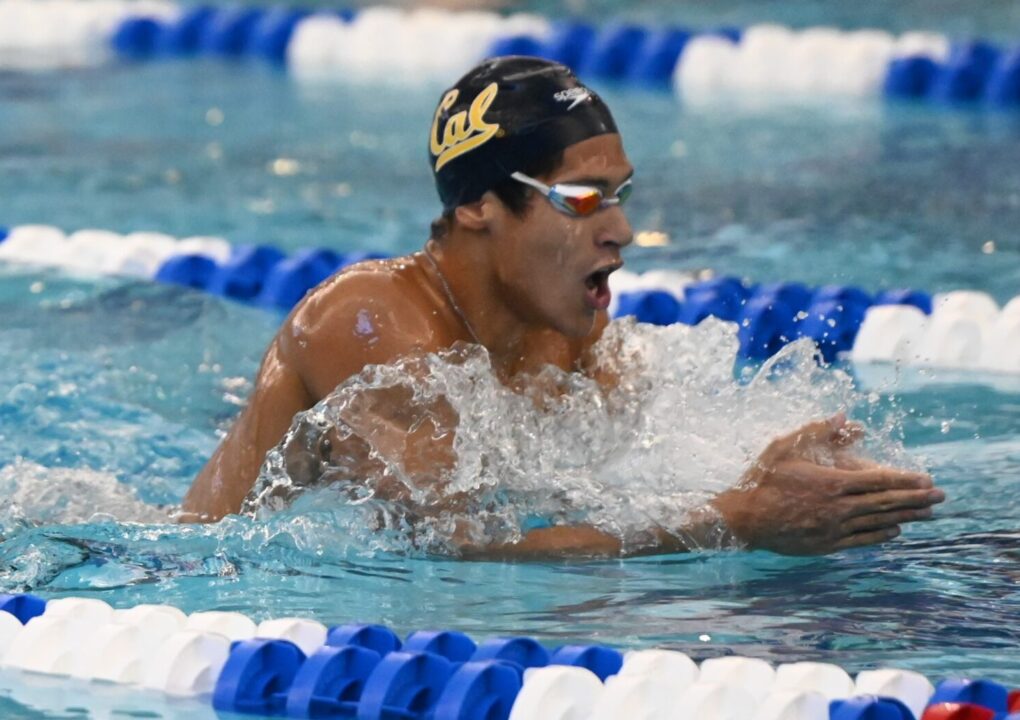 Fifth year senior Olympian Hugo Gonzalez (above) won the 100 back and 200 breast for the Golden Bears on Friday in Salt Lake City. Current photo via NCAA Photos

The Cal Golden Bears easily handled Utah in their trip to Salt Lake City this weekend, topping the Utes 166 to 95. The Golden Bears were led by their stout senior class, which won five individual events on the day. Cal is the second Bay Area foe to trek into the mountains to take on the treacherous Utah altitude, after Stanford topped Utah in Salt Lake last week.

Fifth year senior Hugo Gonzalez was a double winner on the day for Cal, taking the 100 back and 200 breast. In the 100 back, the two-time Spanish Olympian used a quick opening 50 to take the victory in 48.08 by nearly 7 tenths over sophomore teammate Destin Lasco. Gonzalez returned later to dominate the 200 breast, winning by over 7 seconds by touching first in 1:57.18. Last season, Gonzalez was an NCAA A finalist in the 200 breast and 200 IM and scored in the B final of the 400 IM.

Fellow senior classmates Reece Whitley, Trenton Julian and Chris Jhong all won one event apiece as well. Whitley, a Lafayette Hill, Pennsylvania native, easily won the 100 breast in 54.54, touching 2 seconds ahead of freshman teammate Forrest Frazier. Whitley has been one of the top breaststrokers in the NCAA in his career, having made the A final at NCAAs in the 100 and 200 breast in each of his three years with the Bears.

US National teamer and Cal fifth year Trenton Julian won his signature 200 fly in 1:46.03. The Glendale, California native touched a  second and a half ahead of sophomore teammate Dare Rose. Fellow senior Chris Jhong, a native of Pleasanton, California, touched first in the 400 IM in 4:00.95.

Notably absent for Cal was high-impact transfer Liam Bell. Now a junior, Bell spent his first two seasons in Tuscaloosa, Alabama competing for the University of Alabama. While swimming for the Crimson Tide he broke out as a freshman in 2020, posting the sixth fastest 100 breast time in the NCAA before the cancellation of the 2020 NCAA’s. He qualified for NCAA’s as a sophomore as well, but ultimately elected not to compete.

Utah took three events on the day, starting early in the meet when sophomore Marko Kovacic won the 200 free in 1:38.73. That 200 free is a great early-season swim for the Bosnia and Herzegovina native, whose best time is only 1:38.32. Utah’s second event win came in the 500 free as sophomore Dylan Becker touched out Cal’s Tyler Kopp 4:41.31 to 4:41.40. Utah’s final event win came in the 100 fly, where fifth year senior Santi Contreras won in 49.19, out-touching Cal freshman Dare Rose by just .06.

Cal returns to the pool on November 5th when they host Stanford for their annual triple distance meet, while Utah will travel south to take on UNLV on November 6th.

A couple of thoughts:

To Swammer: Bryce is not listed on the Cal site roster and has most likely retired from swimming. His brother Colby is a junior and competing for the Bears.

Re Stanford: Cal only sent a 16 person squad to Utah that did not include Liam Bell, as noted in the SS story, but also did not include Daniel Carr and Sean Grieshop who are still listed on the Cal roster. Recent grad transfer Will Roberts did not make the trip as well. Stanford has recruited very well the last couple of classes, and the “triple distance meet” scheduled… Read more »

That is probably the slowest dual meet I have ever seen from a Durden Cal team. (I do realize it is at altitude). That pool must be 27 yards long and 3feet deep! They were good last week vs UVA so probably not a big deal, just strange for them.

It’s October. Go lay back down on your couch.

Anyone know the situation with Bryce Medford? He does not appear on Cal’s official roster and has not competed for them, but on meet mobile he is still showing up on Cal’s roster

Rumor has it he’s retired.

@yaboi
Comparing the results from the 2 meets if it were Stanford v Cal:

@yaboi
Comparing the results from the 2 meets if it were Stanford v Cal:

BearlyBreathing got you. Carsonn missed his last dual meet because he was attending a friend’s wedding.