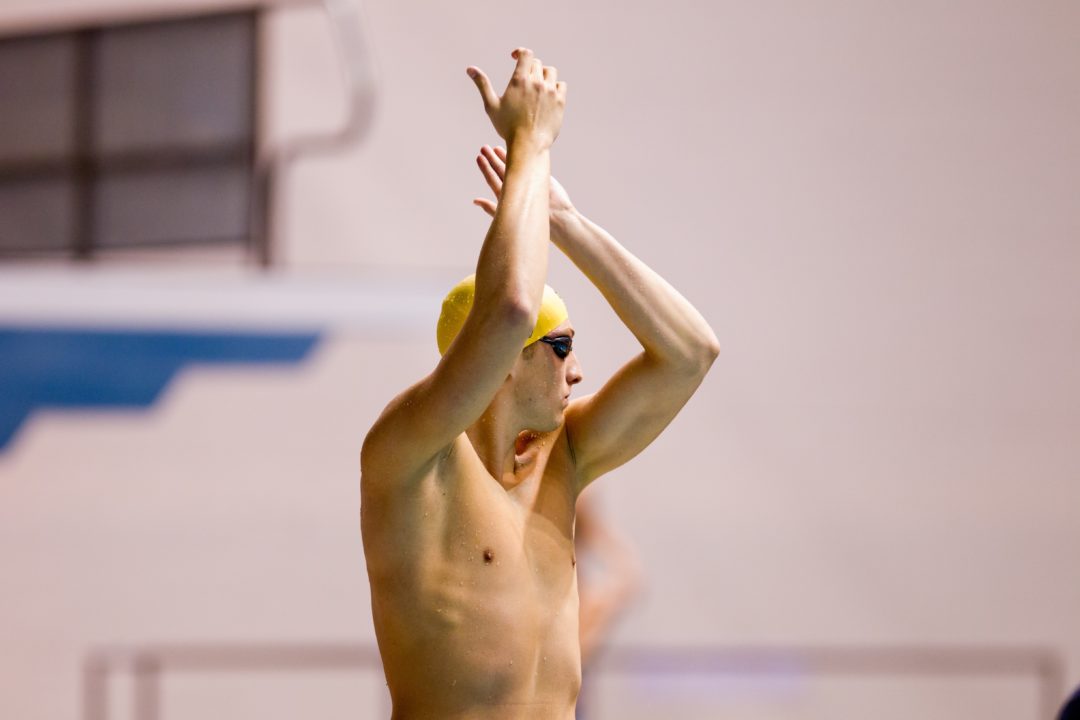 Cal All-American Tyler Messerschmidt announced today that he would head home to Arizona for a year. (Photo Courtesy: ©Tim Binning/TheSwimPictures.com)

Cal All-American Tyler Messerschmidt revealed on his Facebook page today that he was heading home for the semester, meaning a redshirt for the 2012-2013 NCAA season and a huge blow to the Cal men’s hopes of repeating as NCAA Championships.

In a public post, Messerschmidt announced that he would return home to Arizona, where he would focus on training and going to community college to raise his GPA. Then he plans to return to Cal and regain his mantle as one of the team’s best sprinters.

Messerschmidt was a 25-point NCAA scorer last season, including winning the B-Final in the 50 free (19.45) and finishing 8th in the 100 (42.82). He was also a part of four All-American relays, including National Championship winning 200 free and 400 medley relays.

All credit goes to Messerschmidt, as he’s taking a very mature approach to the situation. Though it’s always disappointing to see a swimmer have to miss a season, especially one as talented as Messerschmidt, one must always remember that it is better for mistakes to happen in the relatively safe environment of college. Here’s to rooting for Tyler to have success in his hiatus and come back better-than-ever.

In high school, Messerschmidt trained with the Westside Silverfins, but their coach Matt Rankin is now the head coach at the Phoenix Swim Club. For now, he will work with the Scottsdale Aquatic Club and coach Bob Platt.

Messerschmidt tells us that for now, he’s going to focus on staying fit and sharp in the water, but all of his energy will be dedicated to getting his school straightened out and getting back to Cal.

can one redshirt if your grades aren’t up to par? i guess he didn’t swim any meets in the fall either? sounds like he flunked out of cal if he has to go to community college to get back into cal?! just guessing

Vote Up00Vote Down
the usual suspects

One can red-shirt for just about any reason, four years of comp in 5 (unless there is a 6th granted for medical red-shirt).

Can be a number of reason academically, like low GPA, not hitting credit hour minimums, etc. Going to a CC that he can take classes (receiving transfer credit towards Cal) away from Cal, back home, is a pretty headsie decision and shows an acceptance of mistakes and desire to correct them.

Wish him well instead of just focusing on the negative in observation, Korn, maybe?

Knew something was up when he didn’t accompany the team to OTC for Winter training. Tony Cox was academically ineligible first semester, but he made the trip. Hope Tyler gets his act together academically.

Good for him. For guys at this level, sometimes a few months away only serves to further stoke the fire. No need to be concerned for his future success at all. Glad he is taking the time to keep his life balanced, it will matter most in the long run.