Caeleb Dressel Entered in 200 Freestyle at 2021 US Olympic Trials 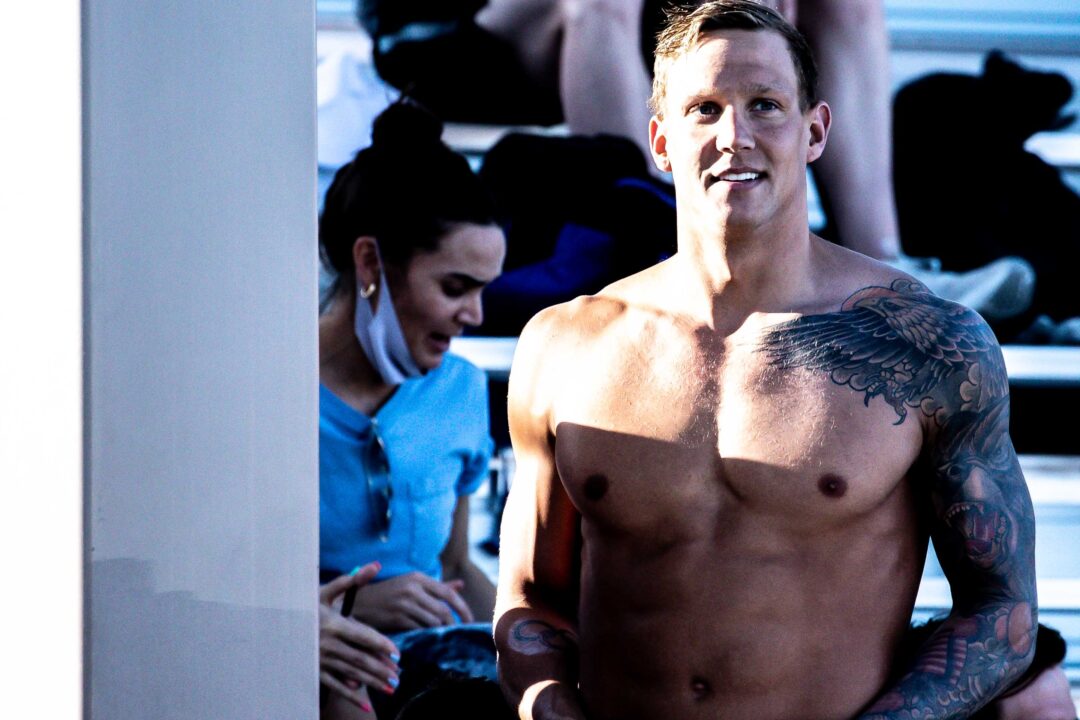 After winning the 200 freestyle at the Pro Swim Series meet, Caeleb Dressel confirmed that he is signed up to swim the race at the 2021 Olympic Trials. Current photo via Jack Spitser/Spitser Photography

After winning the 200 freestyle at the Pro Swim Series meet in Mission Viejo, world record holder Caeleb Dressel confirmed that he is signed up to swim the race at the 2021 US Olympic Trials.

During the post-race interview, Dressel also mentioned how he’d “love” to swim the 800 freestyle relay at the Olympics. However, he failed to say whether he will actually race either event.

If Dressel does elect to swim the 200 freestyle at Olympic Trials, he could be a major threat to make the team individually in the event. Internationally, he raced the meet at the 2018 Pan Pacific Championships, where he finished 18th overall in prelims with a time of 1:47.89. Dressel also raced the event at the 2017 World Championship Trials, finishing 6th with a 1:47.51. That finish earned him a 800 freestyle relay spot at the 2017 World Championships, but Dressel ultimately opted not to swim it.

If he can put up a 1:45+ at any point before the games he will probably be on it. I see trials similar too 2016 where the top 3 are very good, but the 4th slot is more open

Haas, Seli, Dean Farris and Dressel will be on the relay at Olympics.

But just as Dressel is about to lead off, Phelps will descend from the rafters, give Dressel a stone cold stunner, point to Cavic and give him the DX chop, dump Dressels a$$ into the water, and Take his spot.

I have Haas, Apple, Seli, and Smith for the final. Idk if dressel can get by them.

Dude I needed Dressel in the story let me have this

Haas, Seli, Smith, Apple is my best guess, with Pieroni and Farris in the morning.

Farris has a bit to prove before you lump him in there.

Dressel will have his hands full with guys like Kieren Smith, Kibler, Seliskar, Haas, Apple Peironi, etc to make the top 4. I think this is a situation where it might take 1:45 to make the top 6 but no one guy is at 1:44.

Farris will have to have one hell of a taper to be in the running the way he has been swimming….

Dressel would no sell the stunner and rock bottom him, then drop the Dressel elbow on the entire field.

this made my day… lol

Haas and smith for indiv. Perioni and seliskar after

Chalmers needs to work on his heats and prelims speed. Dressel has the progressions down: always knocking off bits of time each time he swims. Chalmers was a few hundreths away from missing the semis at worlds 2019. Crazy

sorry, .12 away from missing semis

agh wrong thread. anyway I’m just saying Chalmers has to be 2016-style strategic to beat Dressel. He has to save the right amt in the tank for finals, not too much, not too little… something CD is really good at.

Dressel has beaten Chalmer’s twice – the 100 free at the 2019 WC, and later leading off the mixed 400 free relay when Chalmers was fresh while Dressel had already swum and won the 50 and 100 fly

Actually I think the reigning Olympic champ has no idea what he’s doing. I expect him to come to the swimswam comment section, read my advice, and finally be enlightened.

What other events would be on the day of the 4 x 200 relay finals?

100 free semis is the first event of the session, the relay the last.

If Dressel does elect to swim the 200 freestyle at Olympic Trials, he could be a major threat to make the team individually in the event.

Hmm, swimming it individually doesn’t really conflict with his other events too badly in Tokyo. Semis is the same session as the 400 free relay final but nearly opposite ends.

If he swam the 200 free individually, I would be pretty worried about his chances at winning the 100 and 50 free to hold off people like Chalmers or Fratus. It might not conflict within the session, but it might hurt him later on the week.

Yea but swimming 4x200s might use up some of that reserve he needs to repeat those type of doubles.

I really don’t think so. In previous interviews Dressel describes the worlds schedule as straight up easy compared to what he had to do for NCAAs where he was carrying Florida in the prelim relays even. He won’t be swimming prelims at all in Tokyo, Not to mention that triple is not required at the Olympics and the 50 and 100 fly finals are on different days as well. The 200 free slides perfectly into his schedule

Not saying he makes the team in it but I don’t think it’d take Much out of him with how he trains.

Pvdh is correct. After he swam 39.90, just squeaking under 40.0 from the year before (does anyone else remember seeing how when he swam that 40 flat, he turned around in the pool & signaled “a pinch” – just so close?), he said he was “tired”. Obviously from carrying Florida. However, Troy’s training serves hiom very well for 2017 & 2019 wowrlds, plus ISL. His baseline for cardio & recovery is simply phenomenal, especially for a sprinter. Notice in the ISL skins matches how Manadou was dropping off, whereas Caeleb was still dropping 21’s.

It killed LeClos though in Rio. And he has a 4 IM, 2 fly background, so it’s not like he’s a wimp.

Don’t worry I am aware that since swimmers have returned to racing that Chalmers has been faster despite his shoulder surgery but i do believe Dressel will be able to pull through and be on par with his 2019 form.

Maybe? Like PVDH said, he’s had some insanely good sessions and has handled plenty of swims in a short amount of time better than almost anyone.

But yeah, can’t say it might not cost him a couple tenths somewhere else later in the meet. (There’s no real way of ever knowing, tbh.)

I think Steve Nolan’s got the most accurate take.

Watch out for the Russians and Milak as well.