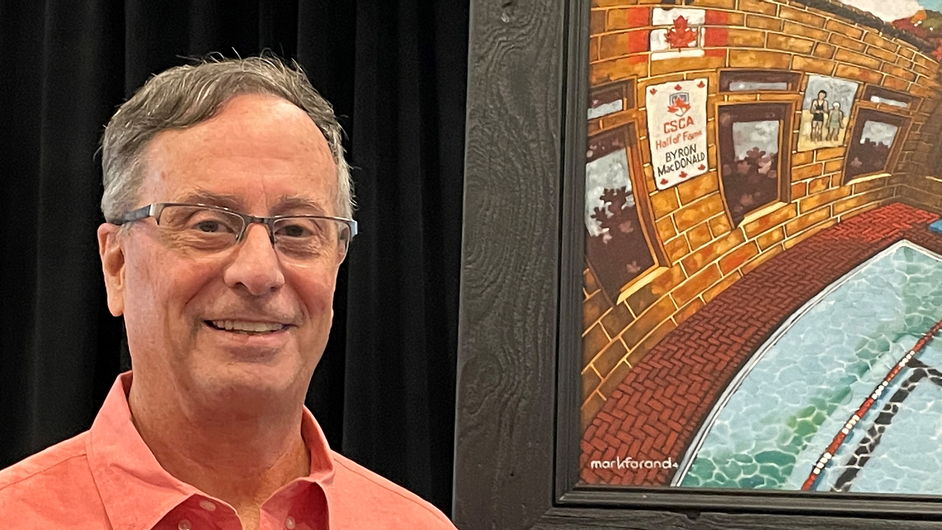 Entering his 45th season at the helm of the U of T swim team, MacDonald has had an illustrious career, being named a 17-time U SPORTS coach of the year. Current photo via University of Toronto Athletics

Over the weekend, MacDonald was inducted as the newest member to the Canadian Swimming Coaches Association Hall of Fame.

About to head into his 45th season at the helm of the Varsity Blues swim team, MacDonald has had an illustrious career, being named a 17-time U SPORTS coach of the year (11 men’s and six women’s).

Arguably, one of Canada’s most decorated university coaches, MacDonald has coached over 200 swimmers to all-Canadian status and over 70 swimmers to international teams. He has guided his teams to 59 conference championships (34 men and 25 women) and 20 national championship titles (11 women and nine men).

A former national team member himself, Byron was ranked top 10 in the world for five years in the 1970s and won several medals, including two golds at the 1970 Commonwealth Games in Edinburgh and placed sixth at the 1972 Olympic Games in the 100m butterfly.

Byron is a two-time Gemini Award winner for his CBC swimming coverage at the 2004 and 2008 Olympics.

Lest we forget…
Mister Byron swam at Univ of Michigan.
Prior to that, he was a member of the
New Trier East (Winnetka, IL) HS team.
In probably one of the most memorable
HS dual meets ever, Hinsdale Central HS
beat his team 48 – 47 (old scoring). How do I remember? I was a sophomore on the winning HCHS team…

Congratulations Byron! A great guy who always has a joke or interesting stories. Someone who helps all swimmers be better both in and away from the pool. I enjoyed seeing and talking with you during your winter training camps in Florida and my visit to Canada.

Byron’s superpower is being able to fit an interesting fact about each swimmer in a single breath as he introduces a final. I appreciate the research he does about *every* competitor in the field.

Yeah, not withstanding some brainfarts – guess that happens when you talk a mile a minute