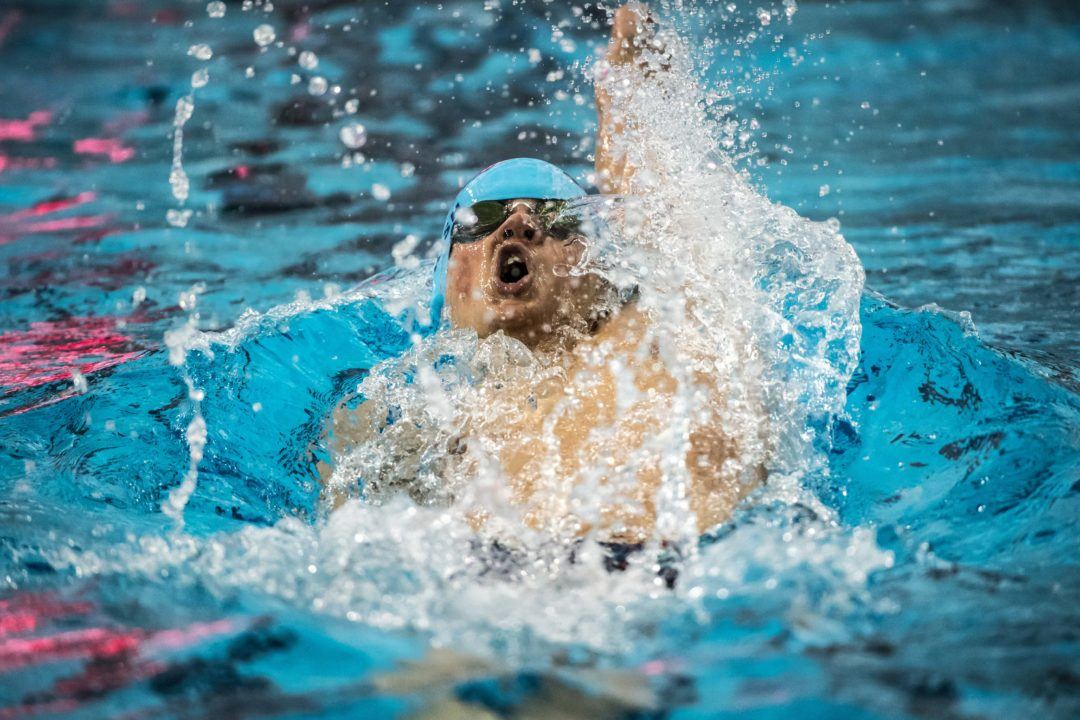 Matt Brownstead went 19.5 in the 50 free last year and split 19.0 on a relay. He'll chase an 18-second split while we get a rematch of 2019's 200 IM thriller. Archive photo via Mike Lewis/Ola Vista Photography

One of the fastest high schoolers in the nation, Brownstead will look to defend his 50 and 100 free titles. He’s on a roll after lowering his 100 free personal-best to 43.32 in December while improving his 200 free. Brownstead was 19.55 to win the 50 last year, breaking a David Nolan state record. He’ll go after Nolan’s 100 free record, too, which sits at 42.34. Also keep an eye on Brownstead’s relay splits – he anchored the State College Area High medley relay last year in 19.06 and could put up a rare 18-second high school swim this year.

Faikish won the 200 IM last year (1:44.88) while finishing third in the 100 back (48.10). He returns this year with a chance to win both, though perhaps the race of the meet will be that 200 IM rematch with Rick Mihm, who was a tenth away from running down Faikish for the title last year.

The only junior on our list for the boys, Matheny broke the state record in the 100 breast last year, blasting a 52.52. With a summer of huge long course drops, Matheny could be in line to go 51 or better this year. It’s not even out of the question that he challenge the national public high school record (51.62) or overall national high school record (51.16). Matheny split 24.1 on the medley relay last year, so keep an eye out for a 23-second split, and he’ll also swim the 200 IM where he could be a dark horse for a big swim behind Faikish and Mihm.

Livingston is the defending 3A state champ as well as the state record-holder in the 50 free. She was 22.73 back in 2018, though she was just 23.00 last year. Livingston won by almost half a second a year ago, and could lower her own state mark in her final high school swims. She’s also the top seed in the 100 free, where she finished fourth last year behind three seniors.

DiMartile won the 100 back last year as a freshman, going 53.73 and cutting about a second and a half from her incoming seed time. This year, she comes in at 54.0 and could have a real chance to break Meaghan Raab’s state record of 53.08 from 2014. DiMartile is also a high seed in the 100 free, and should swim a key leg of Upper Dublin’s #1-ranked 400 free relay.

Last year, Buerger was third in the 200 IM, but neither of the top two return. She’s the top seed by more than a second, and could threaten the two minute barrier. Buerger is also just two tenths back of DiMartile on the psych sheets for the 100 back, but maybe her most notable event will be the 200 medley relay, where North Allegheny’s team was 1:42.59 at the WPIAL meet, just a half-second off a 2014 state record.

Now a junior, Fluehr returns as the defending champ in the 100 fly after going 55.69 last year. She swims the unusual event combo of 100 fly/100 free, usually impossible in the high school meet lineup, but made possible by Pennsylvania’s splitting of the meet order over two days. Fluehr was third in the 100 free last year (51.30), but last year’s champ graduated and Fluehr comes in as the #1 seed.

Villa Maria won the state title last year, with then-freshman Maholic taking second in the 100 back. Maholic was just a half-second behind the now-graduated Katie Luft, dropping more than a second and a half from her incoming seed time. This year, Maholic comes in seeded a tenth faster than last year and sits second in the backstroke. She was also fifth in the 100 fly last year and will swim that event again in 2020.

Shahan swims that same 100 fly/100 free combo as Fluehr, and won both events last year as a sophomore. His 48.83 winning time in the 100 fly from last year puts him within eight tenths of a 2015 Class 2A state record. Shahan also went a career-best 44.68 in the 100 free last month and leads psych sheets there by four tenths.

Last year as a junior, Mikesell came off the butterfly leg of the medley relay (a field-best 22.7) to break the 2A state record in the 200 free at 1:38.31. This year, he comes in as the top seed by almost two seconds, looking to lower that record. But Mikesell could also add the 500 free title and record. He was second last year by half a second, going 4:24.52 as senior Danny Berlitz reset the 2A state record to 4:24.07. Mikesell should be able to challenge that record this year, coming in as the top seed by almost three seconds.

Last year’s 50 free champ, Buckley will have his work cut out for him this season. Buckley was 21.22 last year to win by .04 in a thriller of a finish. He also won the B final of the 100 free. Buckley comes in as the 50 free, but should have plenty of room to move up in a deep field.

The top challenger to Buckley is McBeth, last year’s runner-up in the 50. McBeth went a lifetime-best 20.80 to qualify for state, and that time puts him in contention for the 2A state record of 20.45. McBeth also swims up to the 100 very well, taking third last year in 45.98. A 45.08 so far this year puts him #2 on the psych sheet in that event, just behind Shahan.

Sorry for not accurately predicting that a guy would drop more than a second to break a record he wasn’t anywhere close to?

In fact, doesn’t the fact that he wasn’t widely expected to break that record make it more special?

Absolutely and apologies…not fair with hindsight plus local insight as to their goals/potential. I should have phrased the comment as a shout out to the athletes. Big “thank you” for writing about PIAA swimming!

Thats not Brownstead in the top picture

No it’s not, it’s Faikish