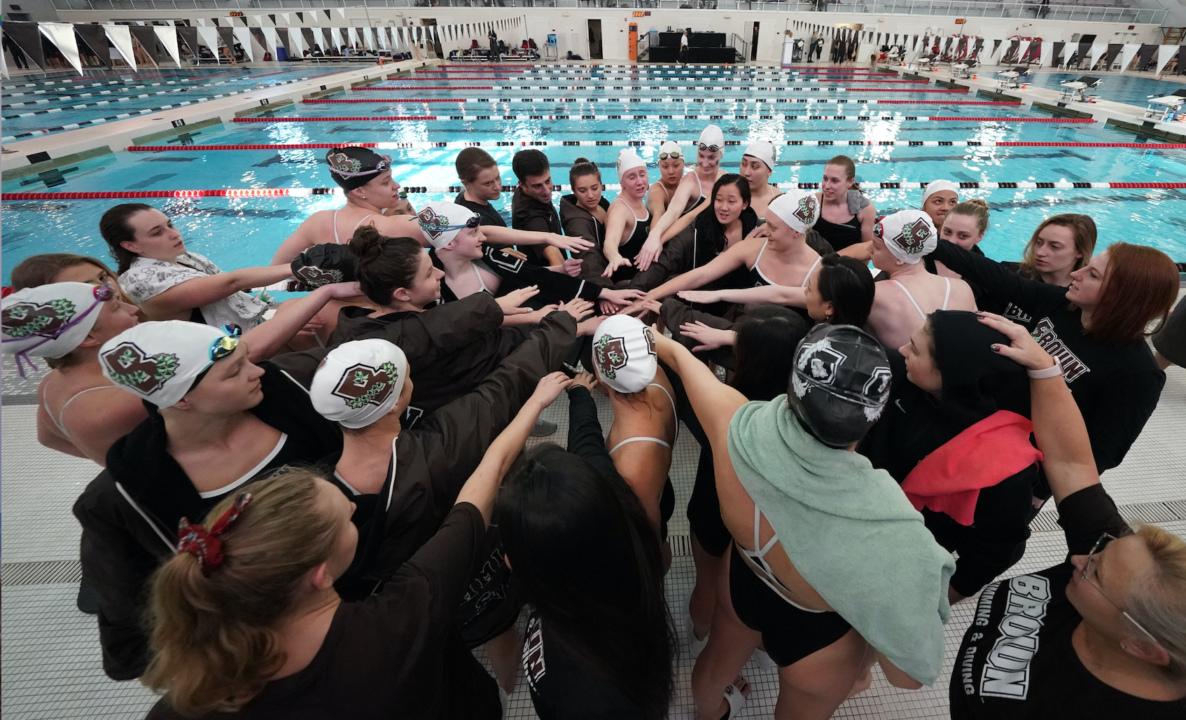 Chidley set the pool record the 200 butterfly with a time of 1:59.74. Both the Brown men and women won the meet, while Cornell celebrated their seniors. Archive photo via Brown Athletics

ITHACA, N.Y. – Senior freestyle distance specialist Jake Lawson celebrated his Senior Day with a pair of individual victories, but it was Brown (4-3, 4-3) that swam away with the win, prevailing over the Cornell men’s swimming and diving team (1-6, 0-6), 186-114, on Saturday afternoon at Teagle Pool in Ithaca, N.Y.

Lawson made the most of his final meet competing in the Teagle Pool, winning both the 500 freestyle (4:33.28) and 1,000 freestyle (9:22.04) races. Lawson’s two wins accounted for just a couple of the Big Red’s individual wins on Saturday, as Cornell had the top performance in five events.

The Big Red posted the top-two times in the 50 freestyle, with Sebastian Wolff touching the wall first in 21.12 and Ian Mackey finishing just behind in second in 21.18. Wolff added a second-place finish in the 200 IM (1:50.61) and also swam a leg on Cornell’s winning 200 medley relay team.

The Cornell men’s swimming and diving team will be back in action next weekend for a pair of meets at Columbia on Saturday, Jan. 29 at 1 p.m. at the Percy Uris Natatorium in New York and Binghamton on Sunday, Jan. 30 at the Patricia A. Saunders Aquatic Center in Vestal.

ITHACA, N.Y. – The Cornell women’s swimming and diving team was right on Brown’s heels, but the Bears edged the Big Red, 157-143, on Friday afternoon at Teagle Pool in Ithaca, N.Y.

Cornell collected seven individual event wins against Brown, highlighted by a sweep in the 100 freestyle. Priscilla Wongso headlined a Big Red group that went 1-2-3, with Wongso winning the event in 50.80. Melissa Parker (51.37) and Anna Gruvberger (51.93) followed in second and third, respectively.

The freestyle events were a huge source of success for the Big Red on Friday, with Wongso picking up her second victory of the day in the 50 freestyle (23.41) and Parker finishing just behind in second (23.51). Parker’s best performance came in the 200 freestyle, as she was the first to touch the wall in 1:50.43, giving Cornell the top finisher in each of the freestyle sprints.

In the diving events, Elise Jendritz and Demetra Williams claimed the top-two spots in both disciplines, with Jendritz finishing as a double-winner for the second time in two weekends. Jendritz won the 1-meter with 289.35 points and the 3-meter with 315.98 points, clinching both victories just as she did against Yale on Jan. 15.

The Cornell women’s swimming and diving team will be back in action next weekend when it takes on Binghamton on Sunday, Jan. 30 in Vestal.

“That was a great road win for us and an exciting way to wrap up the dual meet season,” said Kevin Norman, Ollie ’50 & Kay Patrell Men’s Swimming & Diving Coaching Chair. “Cornell is always tough at home; they threw everything at us and had us on the ropes in the first half. We made some adjustments to our lineup and really used our depth to pull away from them. That was not an easy win and I am very proud of our toughness today.”

NEXT UP
The Boston Winter Invite awaits the Bears in early February. The two-day meet is scheduled for February 4-5 in the Boston University hosted event.

ITHACA, N.Y. – Brown women’s swimming and diving closed out its dual meet season with a 157-143 win over Cornell on Friday afternoon (Jan. 21).

Nell Chidley made history at Cornell, setting the pool record in the 200 butterfly with a time of 1:59.74. In total, nine races were won by Brown on the afternoon.

“Of course it’s always nice to wrap up the dual meet season with a win,” said head coach Kate Kovenock. “I’m very proud of the tough racing we put in today, but I’m most excited to fully shift into championship season with this team. This team has been building momentum all year.”

Brown began the day with a win in the 200 medley relay. The team of Jenna Reznicek, Ellie Brault, Chidley and Sam Scott finished with a time of 1:43.67.

Reznicek picked up a win in the 100 backstroke with a time of 54.77. The freshman earned another win on the day with a victory in the 100 butterfly touching the wall in 55.86.

In the 200 butterfly, Brown earned the top three spots beginning with Chidley’s pool record. Zehra Bilgin’s time of 2:03.29 was good for second and Emma Whall finished third with a time of 2:04.65.

On the boards, Liv Mitchell was the top Brown finisher in the 3-meter with a score of 283.73, finishing third. In the 1-meter Julia Feord took third with 258.15 points.

Brown closed out the meet with the team of Anna Podurgiel, Scott, Chidley and Bilgin taking second with a time of 3:28.05.

The Bears will take part in the Boston Winter Invite from Feb. 4-5 to close out the regular season.