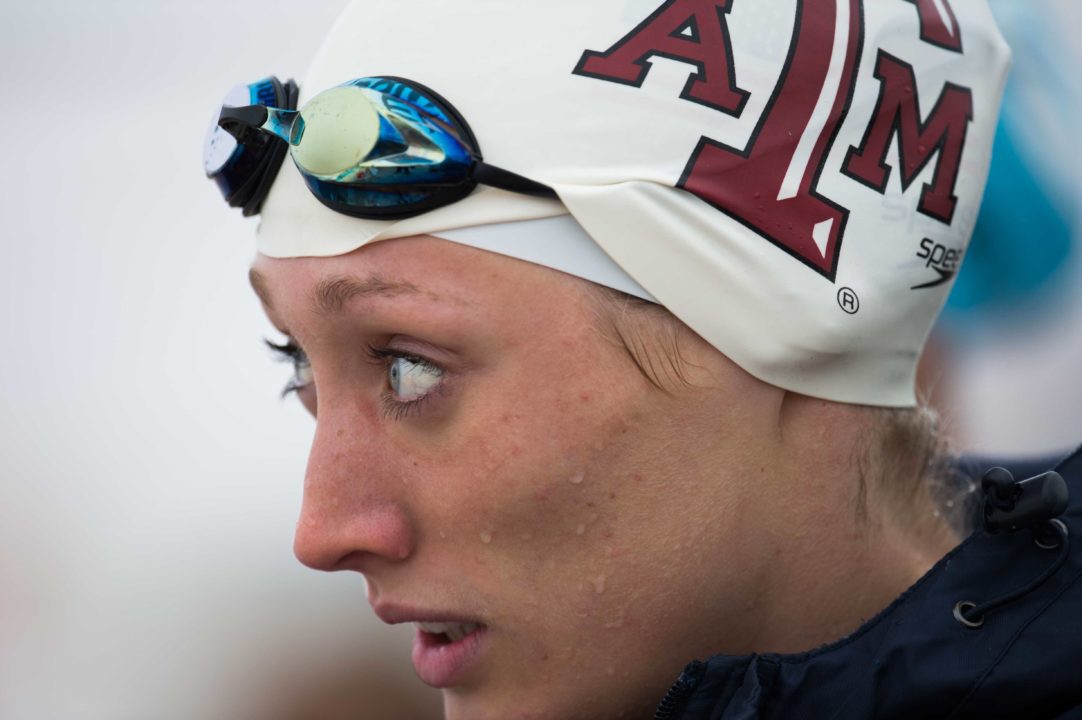 While the entirety of the swimming community focused on the action in Santa Clara this weekend, fast swimming was happening... Archive photo via Mike Lewis/Ola Vista Photography

While the entirety of the swimming community focused on the action in Santa Clara this weekend, fast swimming was happening in Texas, and not just with Katie Ledecky.

Breaststrokers Breeja Larson and Ashley McGregor got the chance to go head-to-head a couple times at the 2014 ST AAAA Senior Circuit II in San Antonio, Tx.

Both swimmers faced off for the first time Saturday night in the 100m breaststroke final. Larson, the heavy favorite, absolutely out-split the entire field including McGregor, finishing in a time of 1:08.33. Larson had some great front end speed, touching in a the 50m mark in 32.18. She came home in 36.15, posting the fastest splits on both the first and second 50.

That time was her fastest 100m breaststroke of the long course season and slots her in at 32nd in current world rankings beating out Canadian Tera Van Beilen.

Behind Larson was McGregor who finished well behind in 1:10.54. McGregor swam the 100m fly just beforehand where she placed fourth in 1:02.18. She split the race well with a 33.43 first 50 and a 37.11 last 50, but just didn’t have the speed to beat Larson to the wall. The Canadian swimmer is better known for her 200 swims than her sprints.

Larson’s time did not crack the top 50 in the world this year.

Although Larson’s performance were the highlight of the meet, lots of other Texas swimmers showed their speed putting up some great times.

On night one, Texas A&M’s Sarah Gibson took the win in the 100m freestyle over teammate Emily Neubert in 57.45 to Neubert’s 57.48. Later on in the evening, Gibson put up a fight for gold in the 400m freestyle with Longhorn Aquatics Quinn Carrozza who ended up winning the event in 4:19.19 just beating Gibson to the wall who grabbed silver in 4:19.49. Carrozza and Gibson faced off again on night two, this time in the 200m freestyle. Carrozza came out on top again with a time of 2:01.73 over Gibson’s 2:03.12.

On night two, Emily Neubert dominated the field in the 100 fly with a swift 1:00.46. Marne Erasmus finished behind her in 1:01.39 followed by Victoria Edwards and Ashley McGregor.

Victoria Edwards came out on top of Neubert on night three, swimming a 2:15.33 in the 200m fly to claim the win. Neubert finished third in 2:19.72 just behind second place finisher Tiffany Futscher who grabbed second in 2:19.38. Following that performance, Edwards took home another win, this time in the 100m backstroke. Her time of 1:04.60 gave her the win over Destiny Nelson and Sofie Underdahl who both finished roughly a second behind her.

Nelson settled for silver again, this time in the 200m IM at the hands of Quinn Carrozza. Interestingly enough, both Larson and McGregor both got disqualified in the race with multiple infractions each. The two Aggies domination of the breaststroke events couldn’t save them here.

The A&M girls opted to swim a 200 breast during the 200 IM final tonight. Most likely because they weren’t there Friday night to swim the 200 breast. That’s why they both were DQ’d

On first day of the Senior Circuit Vanessa Pearl from Metroplex Aquatics had won 200 Breast with her new personal best 2:34.55 and new North Yexas record in her age group . In second place was her team mate Sofie Underdahl with 2:38.59 ahead Destiny Nelson who got 3rd spot at 2:39.82