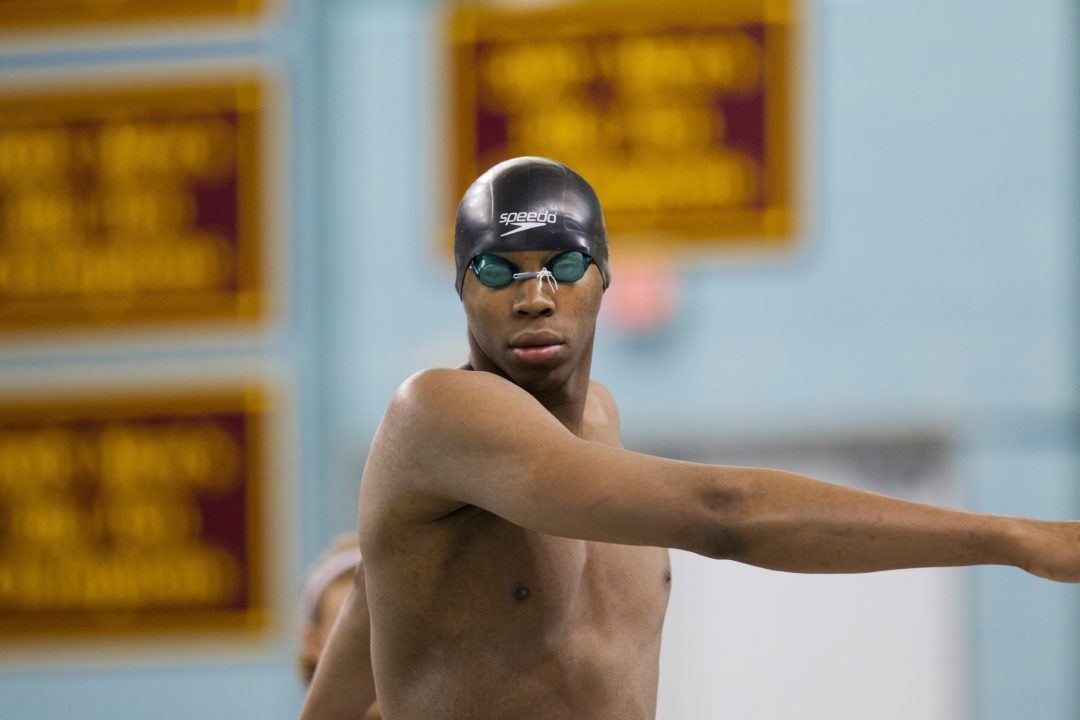 The Longhorns and Aggies split the wins on day 2 at the Texas Senior Circuit meet in College Station. (Photo Courtesy: ©Tim Binning/TheSwimPictures.com)

The Texas Longhorns swimmers continued to roll on day 2 of the College Station Senior Sectional, but the Aggies got their collective acts together with better-looking swims than they had on Friday.

Caroline McElhany, the former Longhorn-now-Aggie swimmer, took the women’s 100 fly title in 1:01.15. She was a huge recruit coming out of high school, and after a few down years, has fought back in the last year to look as fast as ever. This time isn’t a best time for her, but it’s a “right” time for her as an unrested, in-season result. LSU’s Amber Carter is coming off of a fantastic freshman season, and carried the momentum with a best-time of 1:01.68 for 2nd. Texas’ Ellen Lobb had a good back-half, but ran out of room for 3rd in 1:01.75.

The Aggies continued to roll in the 100 breaststroke, with Breeja Larson taking a win in 1:10.06. It’s hard to know what that number means, other than that it’s a good time. The lack of reference is due to the fact that most of her best times came at long course meets during the NCAA season, where she was focused on yards swimming.

There was a bit of disappointment, as Laura Sogar went back home to Austin after a fantastic 200 on Friday. It was a planned one-day affair for her, but it would have been great to see what she had in her 100. As it was, her teammate Spindrift Beck had a great runner-up time of 1:11.81. Beck (like McElhany we discussed before) was a prodigy in high school. But her best 18 swims were all from high school. That monopoly was disrupted in this race, as it was faster than she’s been since the 2008 Trials. Catherine Wagner took 3rd in 1:12.68 – the second-best in-season time of her career. She typically swims very well at these Senior Circuit meets, and if she can get more out of her taper this season, then a best time is a slam-dunk at trials.

But Cammile Adams took the baton right back for A&M to close the meet, with a 4:51.48 win in the 400 IM. As this meet wears on, it’s becoming more-and-more clear that she had to have been rested for the Austin Grand Prix when she shocked the swimming world with a 2:06 in the 200 fly. In this 400 IM, for example, she was 13 seconds faster at that meet.

The Texas men had some very good swims at this meet, including Dax Hill’s 1:50.83 to win the 200 free. He seems to be sticking to the slow-start, fast-finish strategy that served him so well in the NCAA finals this year en route to a national title. Jake Ritter took 2nd in 1:52.30 – the second time in this meet that he’s blown away his best time.

And the lone high-school aged winner at this meet was North Texas Nadadores’ Jonathan Roberts in the men’s 400 IM in 4:31.08. These meets are designed as much for high school swimmers to get experience in an elite environment as it is for the collegiate and pro swimmers to get in some training races, so this is an important swim. Roberts swims very well in this A&M pool, and that’s his second best time in the race here in two months.

Sunday will see the anticipated appearance of Dara Torres in the 50 free.