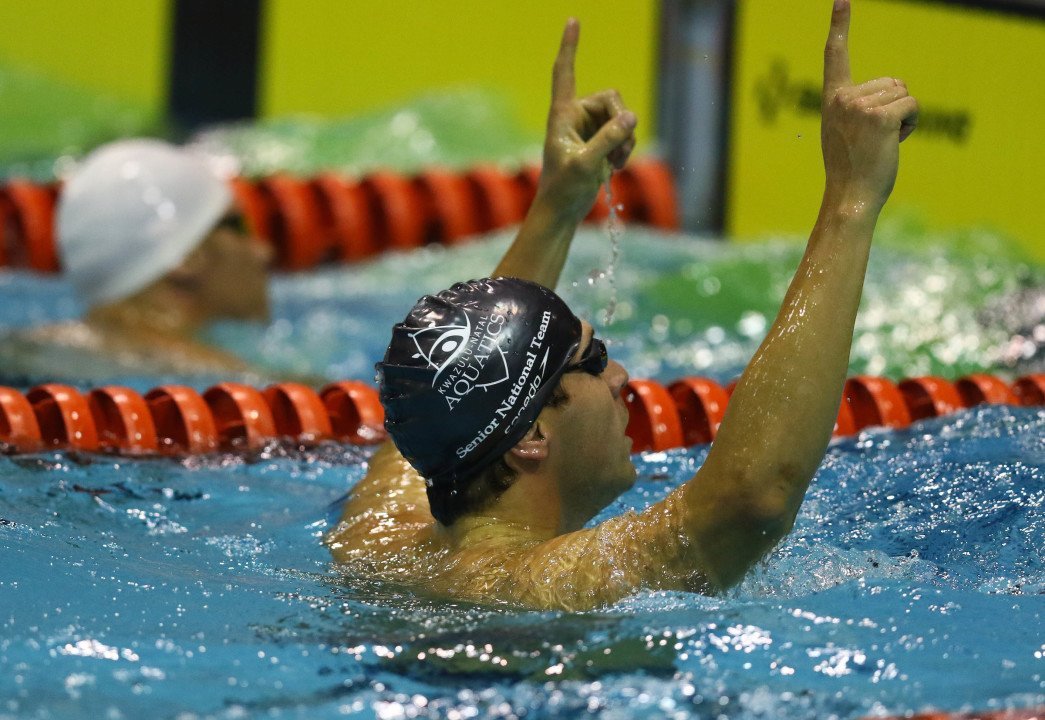 Swimming at a small meet in Tucson this weekend, South African Olympian Brad Tandy threw down a 22.06 to blow away the rest of the field by almost two full seconds. Archive photo via Anesh Debiky/Swim SA

Swimming at a small meet in Tucson this weekend, South African Olympian Brad Tandy threw down a 22.06 to blow away the rest of the field by almost two full seconds. He took .66 off of his prelims swim of 22.72, and according to Tandy, that 22.7 was without a tech suit. His 22.06 in finals would be the 18th-best time in the world this year. The 26-year-old is training with Tucson Ford Dealers Aquatics, where most of the University of Arizona squad trains outside of the NCAA season.

Tandy is already tied for the world’s 10th-best time this year with a 21.97, which he shares with Japanese sprinters Shinri Shioura and Katsumi Nakamura. He posted that time at the 2017 South African Nationals, where he won the event and punched his ticket to the 2017 World Championships in Budapest. Tandy wasn’t far off of that 21.97 tonight, going less than a tenth slower.

A 22.06 at a small-scale meet in early June is a good sign for Tandy, who finished 6th at the 2016 Olympics in a tie with Brazilian star Bruno Fratus (21.79). He’s broken the 22-second barrier six times in his career, the first time being at U.S. Winter Nationals in December of 2015, with three more of those instances occurring at the Rio Games.

Tandy said he “wanted that 21 but that can wait for the bigger event.” That bigger event is the 2017 Worlds, where he’ll look to make another finals appearance at a major international meet after his 6th place finish in Rio.

“[I’m] feeling strong and confident in my training leading up to worlds. [I] believe if things go to plan I’ll have another shot at a podium spot or fast finals,” said Tandy, adding that it “was good to see that I would’ve been up with the guys out at Santa Clara.” His 22.06 would’ve placed 2nd in Santa Clara tonight at the Arena Pro Swim Series, behind only Vlad Morozov‘s 21.97, and ahead of big names like Nathan Adrian and Marcelo Chierighini.

“[I] have more racing tomorrow but trying not to take it too serious and enjoy,” said Tandy.

Good call to stay home and swim faster at a local meet than all but one of the swimmers at Arena Pro series.
It just goes to show that everyone has to swim the same 50meters and fast swimming doesn’t require a spotlight.

Yeah, but clean, open water (two second lead) versus not. Tough to compare to the Santa Clara boys. Not to mention the SC pool is 4 feet deep at one end. Good swim, but put Morozov or Adrian in clean water and they would have been faster than they were at SC.

Clean water doesn’t make any difference in a 50 LCM…. it’s all clean water ahead anyways, but having someone to race does…

Wrong. Outside wall lane is slower than an interior lane specifically because of lateral turbulence.

I race the 50 more than you can imagine my friend, it doesn’t make any difference…

The Tucson pool is only about 3 feet at the start end of the 50. Pretty comparable depthwise to the Santa Clara pool.

The best start in the world

Until entry, then it’s Dressel til 15 meters.

Watch the 50 from Rio, the man is untouchable to 15 meters. Not even Dressel is that good.