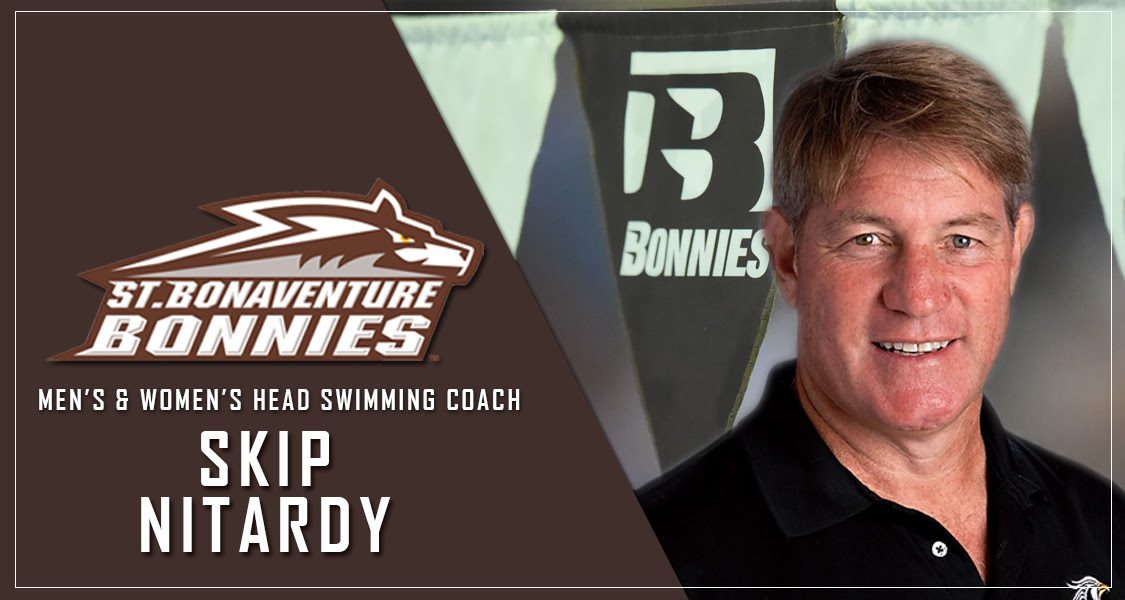 SBU Director of Athletics Tim Kenney said, “We are excited to welcome Skip to the Bonaventure family as head coach of our swimming programs. Our programs have a long history of success and Skip will be a great fit with his experience and personality to continue that tradition. We are very excited for the future of St. Bonaventure swimming and diving.”

Nitardy brings over 25 years of competitive coaching experience to the Bonnies. He was head coach at the University of Maine for two seasons, helping 14 swimmers qualify for the ECAC Championships in his first season and 22 swimmers in his second. While at Maine he spent extensive time working with the community and expanded the UMaine Instructional Swim Lesson program to nearly 250 participants per year.

After Maine, Nitardy worked as the Twin Rivers YMCA (New Bern, NC) Aquatics Director. There he qualified five swimmers for YMCA Nationals. Since 2014, he has been the Athletics Director at The Epiphany School of Global Studies, also located in New Bern.

“I’m excited to get up there and get things started. St. Bonaventure swimming and diving has great tradition that I look forward to carrying on,” Nitardy said. “I am very excited about bringing the two programs together. We start the season in just over a month and I am really looking forward to meeting all the kids and getting to work.”

Stephanie Fleming, who took over as head men’s and women’s diving coach in July 2017, will remain in charge of the Bonnies divers. Nitardy will fill out the remainder of his coaching staff in the coming days. The Bonnies swimming and diving programs open the 2018-19 season Oct. 5-6 at Colgate.

Why did he leave Maine? Hmmmm….

What a baseless comment, feeble attempt to get ‘upvotes.’ Sad.

Excellent guy! I aspire to be like him one day!

Something to do with holding private lessons unsanctioned by the NCAA as with an active team member during his tenure at Maine.

Vote Up1060Vote Down Reply
Not the girl he slept with

Skip was my fav couch ever omg!

Vote Up90Vote Down Reply
Not the girl he slept with