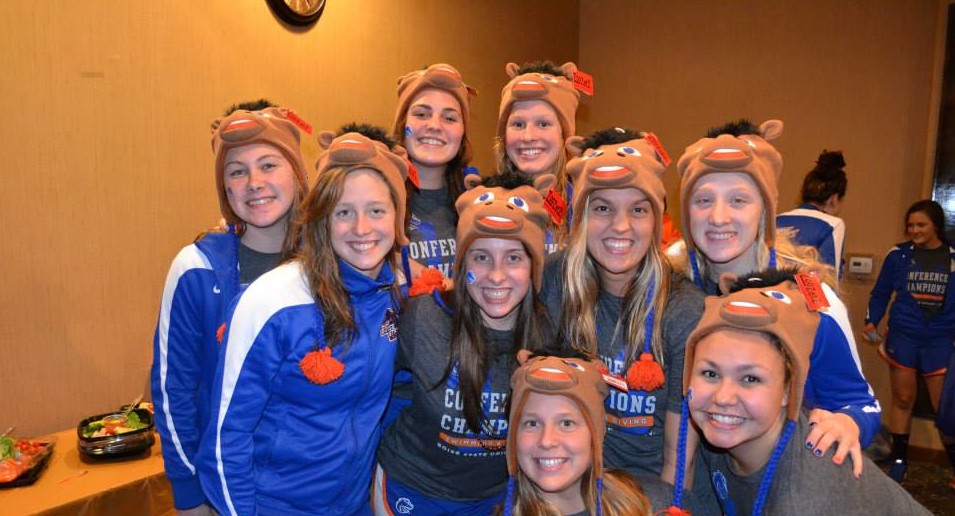 And the full results PDF is here.

On the women’s side, the SDSU team of Kate Santilena, Cecilia Zaccarelli, Summer Harrison, and Taylor Johnson won the 200 medley, just holding off the Boise State team in 1:44.18. While Boise’s backstroker Sam Wicks got way ahead of the field off the first 50 with 26.03, Johnson’s blistering 22.61 freestyle sealed the deal for the Aztec victory. Boise hit second in 1:44.47.

Grand Canyon’s Mark Nikolaev, Egyptian record-holder Youssef El Kamash, Daniil Antipov, and Mazen El Kamash took the win on the men’s side in 1:31.25, beating out UNLV by nearly two seconds. Nikolaev outsplit the field of backstrokers by almost a second.

Boise sophomore Amelia Draney outswam the field by far in the 1000, clocking 10:17.68 to come in 10 seconds ahead of her second place teammate Blake Balogh (10:28.15) and just miss her personal best.

Mazen El Kamash took the win on the men’s side, just outtouching UNLV’s Samuel Lameynardie 1:42.90 to 1:43.04. UCSD’s Garrett Tse finished close behind in 1:43.14. El Kamash held the lead from the very beginning, letting up a little at the end, but still hitting the wall before his competitors.

Nikolaev, a Russian native, dominated the men’s 100 back, grabbing points for GCU by finishing nearly two seconds ahead of the field in 49.14.

Yousseff El Kamash, who set a new Egyptian national record in the long course version of this event while placing ninth at AT&T Nationals last month, won the 100 breast in 57.55. UC San Diego’s AJ Zavala finished second in 58.27, followed by Forrest Beesley in 58.40.

Freshman Rachel Kelch of San Diego State dominated the 100 fly, finishing in 2:03.13, well ahead of second-place UNLV swimmer Goezde Tekin, who finished in 2:05.68. Last year, Kelch originally committed to Western Kentucky, but after their program was suspended, changed her choice to SDSU.

Freshman Grand Canyon swimmer Daniil Antipov, who scored a bronze at World Junior Championships in the 100 distance this summer, held off UNLV’s Avi Cohen for the win in the 200 fly. Antipov hit in 1:49.95, followed by Cohen in 1:50.33.

SDSU senior Johnson destroyed the field in the 50, just missing the 23 second barrier by finishing in 23.02. UNLV’s Julia Fehervari came in second in 23.81, with Boise’s Brittany Aoyama third in 23.84.

Julia Toronczak of UCSD, a sophomore who took 16th in this event at Division II Championships last year, led the field, finishing in 2:01.49 and beating out her chiefly-DI competitors. Iryna Glavnyk of Grand Canyon hit second in 2:03.17, followed by Kelch in 2:03.71.

200 champion Chard joined up with her Boise teammate Balogh for first and second in the 500 free. Chard finished well ahead of the field, clocking 4:58.66, while Balogh finished in 5:05.21. San Diego State’s Francesca Arredondo  came in next in 5:06.93

UNLV’s Dylan Tarazona fought hard against GCU’s Antipov in the 100 fly. They touched the wall about the same time at the 50, Tarazona in 23.04 and Antipov in 23.15, but Tarazona wasn’t able to hold off Antipov’s back half speed. Antipov added another butterfly win to his list with 49.32, while Tarazona hit second in 49.44.

UNLV’s Lina Rathsack proved herself unstoppable in the 200 IM, taking her third event of the meet with 2:07.10. Her UNLV teammate Tekin fought hard but couldn’t quite get ahead, taking second in 2:07.47. Boise’s Wicks finished third in 2:08.57.

GCU’s Nikolaev dominated the men’s event, finishing five seconds ahead of his teammate Lytvenok. Nikolaev held a commanding lead from the very beginning, where he split 23.87 in the fly leg to start the race, and from there, the lead only increased. Lytvenok hit second in 1:53.62, followed by UC San Diego’s Tse in 1:54.67.

In the final women’s event of the meet, Boise State’s Chard, Aoyama, Balogh, and Cann held a lead throughout, staving off UC San Diego’s Toronczak, Natalie Tang, Madelyn Huttner, and Dani Watkins to the very end. Boise State finished in 7:35.47, and UCSD hit 7:39.35.