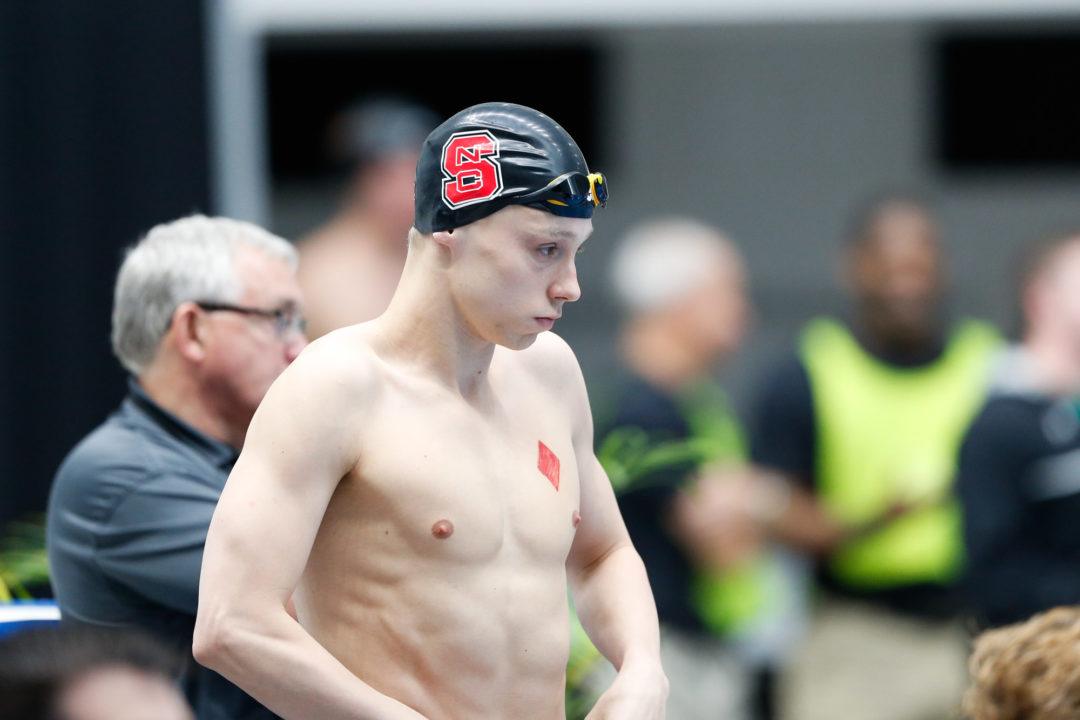 Swimming on the road in the frigid north this weekend, NC State senior Anton Ipsen brought the heat. Archive photo via Tim Binning/TheSwimPictures.com

Swimming on the road in the frigid north this weekend, NC State senior Anton Ipsen brought the heat.

In the very first individual event of the team’s two-day dual meet with Wisconsin, Ipsen blasted an 8:52.87 to win the 1000 free and rise to the top of the NCAA by a wide margin.

Ipsen currently leads the NCAA ranks by 5.5 seconds and is one of just three swimmers to break nine minutes on the year. Further than that, his time is among the better in history in the 1000, and certainly one of the best October swims we’ve ever seen in that race.

Last year at NCAAs, Ipsen went 8:49.63 in his 1000 split in the 1650 at NCAAs. He would go on to take 7th overall. Of the six ahead of him, half graduate (national champ Clark Smith of Texas, open water star Jordan Wilimovsky of Northwestern and Wisconsin standout Matt Hutchins), leaving Ipsen in the hunt for an elite finish at NCAAs. Based on USA Swimming’s event rank system (which doesn’t always include intermediate splits from 1650s), Ipsen’s time would check in well within the top 25 swimmers in history, though Ipsen already ranks a bit higher than that.

NC State suffered a couple key graduations last season, but with Ipsen swimming well, the stage might be set for the Wolfpack to continue its rise into the NCAA’s top stratosphere – this year, likely a four-team tier with Texas, California and Florida.

The diamond is something the men’s team does. It’s drawn on before meets. If you ever watch their team swim,
most everyone, if not everyone, has a diamond drawn in that position. The meaning, not a clue.

Vote Up60Vote Down Reply
that guy

It is a tradition that the guys do it. No one from the team will tell you. Its a secret for the team.

Vote Up20Vote Down Reply
Not on the team, deduction skills

Who told you this or how did you deduce this? I would like to see some evidence.