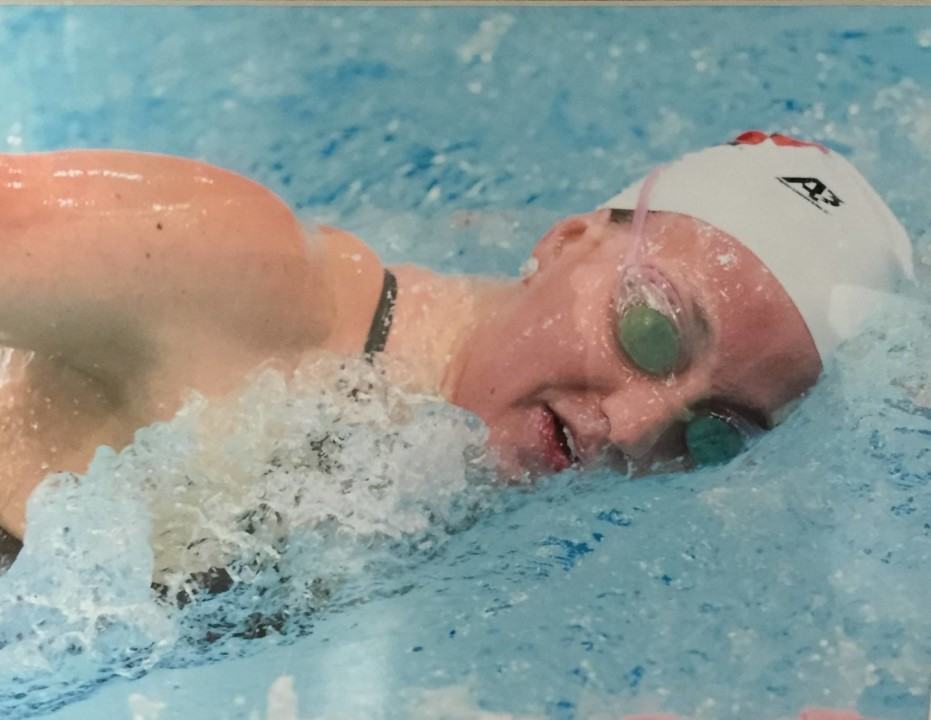 The Wisconsin Badgers have been excellent during Championship Season for a number of years now, with the 2015 season seeing... Archive photo via University of Wisconsin Swimming & Diving

The Wisconsin Badgers have been excellent during Championship Season for a number of years now, with the 2015 season seeing them take 4th place overall at the Big Ten Championships, the team’s best finish since 2012. Additionally, the team excelled on the national stage as well, taking 13th overall at the 2015 NCAA Championships, and the Badgers were just 23 points shy of securing a top 10 finish. In 2016, the girls from Madison are poised to do serious damage once more at the Conference Championships, and Jenny Holtzen out of Fayetteville, Arkansas will be one of the Badgers’ most powerful tools in the distance events.

Returning to Big Tens as a sophomore, Holtzen would change up her events slightly and improve upon her placings from the previous year. She would record finishes of 16th in the 200 breast (2:17.38, 2:15.89 in prelims and 13th in the 1650 (16:24.59), while also suffering a DQ in the 400 IM. Both of those scoring performances were collegiate bests for the then-sophomore, and the 200 breast was a lifetime best in the process.

It is easy to see that Holtzen has only gotten better with each passing year with the Badgers, and her mid-season times bode well for her final collegiate taper meets. At the Texas Hall of Fame Invitational, Holtzen posted times of 4:46.89 in the 500 free, 16:16.26 in the 1650, 2:15.34 in the 200 breast, and 4:18.77 in the 400 IM. Her 200 breast time was a lifetime best, and all of her other swims approached her career bests as well, putting her in prime position to go out with a bang.

Given how good Wisconsin has been during Championship Season each and every year, all in attendance in Ann Arbor this week will have their eyes on the team to see if they can match their incredible performances from last season. Many teams in the Big Ten are fortunate to have large senior classes to help lead by example for their younger teammates, but the Badgers will march into Canham Natatorium with only four seniors on the roster. Luckily, Coach Whitney Hite will be able to rest easy knowing that he has Holtzen to shine as a symbol of resilience while she enjoys her last hurrah on the conference scene.

I joined my first club team when I was 4. My 11-year-old sister swam on the team, so we knew the coach. You had to be 6 to officially start, but I annoyed the coach so much begging to join that one day he said if I could swim a 25 free I could join. I did it, and he kept his word! There were some name changes, but I swam for that same team until I left for college.

The finals session on the second day of Big Ten’s last year was incredible. The session started off with the 400-medley relay pulling off a huge win, and after that the momentum just kept going. Everyone who swam that night either won their heat, event, or just had a phenomenal swim. Everything went right for us that night, and it was so fun to watch and be a part of.

My first time at NCAAs was a blast! Since I only swam two events, I tried to really get behind my teammates and help keep the energy going. Everybody swam really well, and it was just great to be a part of it and watch all of my teammates’ hard work pay off. We have a smaller women’s team in general, but when there are only 9 of us at a meet everybody has a role, which was probably my biggest takeaway from the meet. Even though I wasn’t there scoring points, positive energy and good swims definitely help keep the momentum going.

For a number of years now, Wisconsin has done exceptionally well during Championship Season both on the women’s side and the men’s side. Do you feel like there is something special about the training atmosphere in Madison that allows the team to always do so well in February and March year in and year out?

There’s definitely something special in Madison! We spend the whole year working incredibly hard and really focusing on doing everything right, including the little things, which really pays off at the end of the season. Having a small team helps everybody see their role, which allows everybody to get excited about championship season. The whole team just gets so excited to swim fast and watch our teammates swim fast that the energy is incredible and that combined with our hard work really enables us to always be successful at Big Tens and NCAAs.

My club coach throughout high school, Scott Berry, was absolutely phenomenal. He really helped me not only as a swimmer, but helped me mature a lot as a person. I definitely wouldn’t be where I am without him!

I don’t graduate until December, so I’m just planning on finding a job in Madison, hopefully something that involves working with elders. After I graduate, the plan is to move to Chicago.

We had a fantastic meet last year, but we’ve got big goals to make this year even better. Fans should definitely expect us to continue our dominance in areas we typically do well, but I also think we’re going to surprise some people with our performances in other events as well. It’s definitely going to be a fantastic meet!