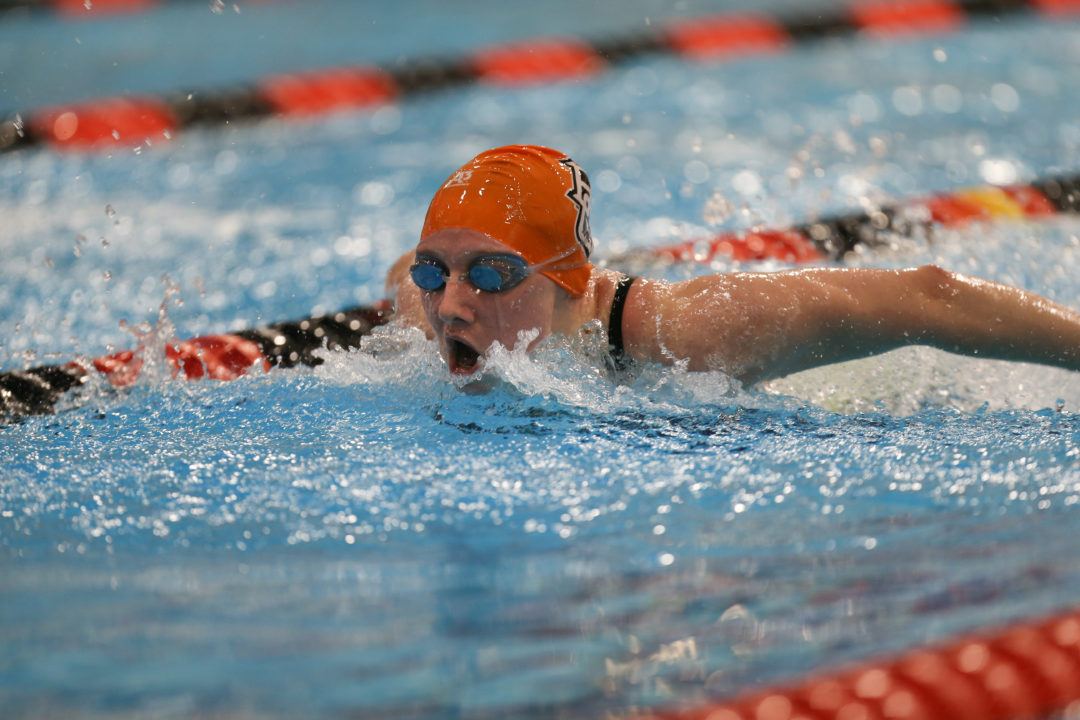 The Bowling Green State University swimming and diving program took down the Rockets with a dominating victory, winning by a score of 223-129. Current photo via BGSU Marketing & Communications, Isaiah Vazquez

BOWLING GREEN, Ohio – The Bowling Green State University swimming and diving program took down the Rockets with a dominating victory, winning by a score of 223-129. The meet served as the close to the Falcons’ regular season, concluding with an 8-5 record, as well as 2-3 within MAC competition. The wins serves as BGSU’s first since November, but creates strong momentum entering the MAC Championships.

Six In A Row
The win over the Rockets is Bowling Green’s sixth consecutive victory over their rival, with the streak beginning during the 2013-14 season. This win also ranks as one of the biggest in terms of margin of victory with the Falcons winning by 94. During the streak, the Falcons have had a larger margin just once when they topped the Rockets by 101 during the 2016-17 season.

Coach Perkins’ Perspective
“I was impressed with our performance today. We did a great job of competing. In fact, I think we were better today than yesterday. One of the highlights of the meet was Daisy Platts breaking the pool record. I am excited to see what we can do at MACs.”

Up Next
Next up, the Falcons will travel to Akron to compete in the MAC Championships that will span from Wednesday, Feb. 27 through Saturday, March 2. Last year, Bowling Green closed with a fifth place finish in the MAC, including having Talisa Lemke named to the All-MAC First Team.

TOLEDO, Ohio – Toledo women’s swimming and diving fell, 223-129, to arch-rival Bowling Green today in its final dual meet of the season. The Rockets recorded three event victories and 25 top-three finishes over the weekend. The meet was highlighted by the recognition of seniors Jessica Avery and Bailey Cahill ahead of day two’s events.

“Bailey and Jess have meant a lot to the team as athletes, as students, and as leaders,” head coach Jonas Persson said. “They work hard, race with passion, and believe in our team culture. They are great role models for our team. I’m very proud of them.”

Welke’s victory came on Friday night. The Toowoomba, Australia native beat BGSU’s Nicole Borgerding by .45 seconds to earn nine points for the Rockets in the 100 breast.

Sales came out strong on day two, winning the 200 fly in 2:05.10, three seconds ahead of BGSU’s Sarah Hennings. Eriksson rounded out Toledo’s victories after securing the 50 free in 24.25, .24 seconds ahead of sister Anna Eriksson from BGSU.

Harris’ finishing time was 5:09.04, a speedy four second improvement on her previous best.

Up Next
The Rockets return to the water a little over two weeks from now for the Mid-American Conference Championships in Akron. The conference meet runs Feb. 27-March 2 at Akron’s Ocasek Natatorium.