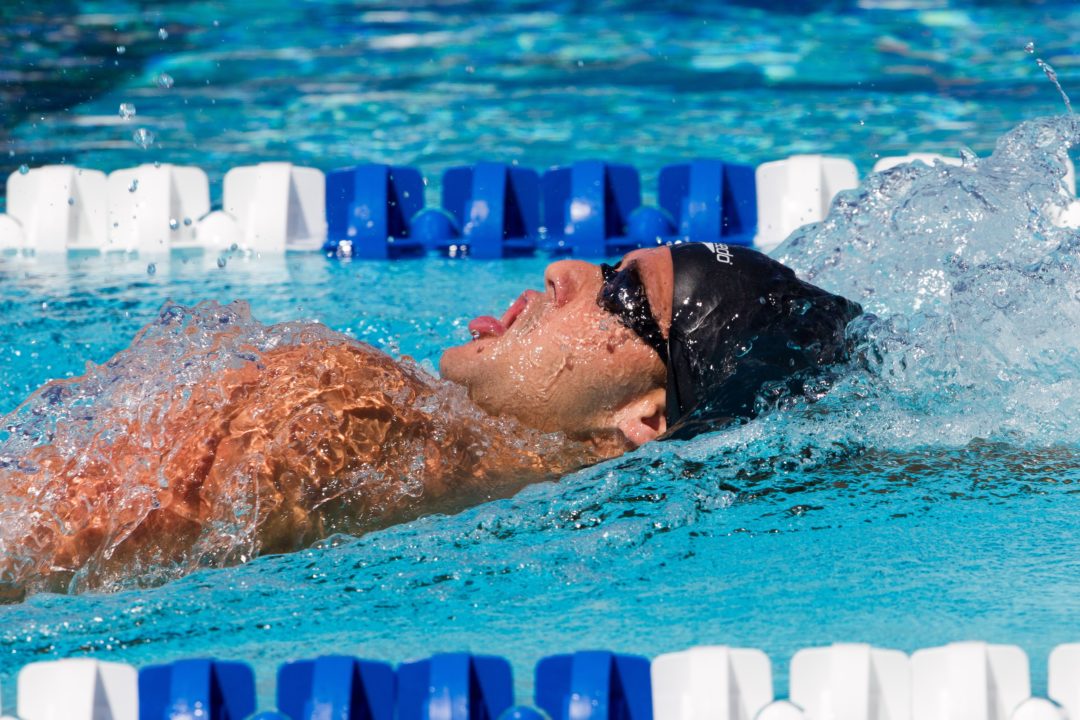 When the dust had settled, Energy Standard finished 12 points clear of the Condors, regaining the title after losing to Cali last season

Energy Standard set an unofficial new world record in the SCM 4×100 mixed medley relay on Saturday with a time of 3:30.94.

After a low (slow) day of competition on Friday in Brazil, the 2012 Maria Lenk Trophy ended with a bang. A ton of personal bests fell and Olympic spots were flowing like they were water in Iguazu Falls.

In a gleeful result for the Brazilians, two swimmers went under the FINA A-cut in this men’s 100 backstroke. Thiago Pereira hit his goal, which was to lock up a spot on the medley relay, thanks to a 53.86 win. That’s the first time in his career that he’s been under 54 seconds in the race. Daniel Orzechowski, who had a great 50 back to open this meet, was also under with a 54.20 from the prelims.

He was slower in finals (and was passed by American Eugene Godsoe, representing Flamengo), but that morning swim is enough to put him on the Olympic team. Pereira won’t swim this event individually, but will now probably be on the relay. This is one more big piece to the Brazilian medley relays, that now feature Pereira and Felipe de Silva on the back and breast legs. Cesar Cielo will occupy either the freestyle or butterfly leg, and then Glauber Silva (fly) or Bruno Fratus (free) will take whichever one he doesn’t.

Guillherme Guido and Gabriel Mangabeira, the two fastest Brazilians in history coming into this meet, continue a decline and finished 7th and 8th, respectively, in this meet.

Two more Brazilian men sealed up their Olympic spots in the men’s 200 fly, which was not unexpected. But the finish order was a bit of an upset, with Leonardo de Deus approaching his lifetime-best to win in 1:55.70. Kaio Almeida, the country’s most famous 200 butterflier (and the man who will have a bigger medal hype, if not hope) was 2nd in 1:56.50.

Joanna Maranhao moved into the world’s top-25 with her win in the women’s 200 fly of 2:09.67 (in a race that Mireia Belmonte swam last year, though she cut donw her schedule a bit for this season’s meet). That’s by far the best swim of Maranhao’s unrested meet. That won’t give her a second event on the Olympic Team, but it was within three-tenths of her National Record. That’s not bad given what she’s been through for the rest of the meet.

Fabiola Molina of Minas earned a small crumb of sweet redemption for herself on Saturday, after having had a pretty awful last year. First, she lost her qualifying times for the World Championships thanks to a two-month doping suspension (even though the suspension was up before worlds); then she would later in the year find out that the ban had been extended to 6 months. All of this meant that she would have one chance, and one chance only, to qualify for the Olympic Team in her best event, the 100 back.

She stepped up in this meet with a 1:00.74, clearing the FINA Automatic Qualifying Time in the race, and putting herself on a third Olympic Team. She will turn 37 before the London Games start, and this will be her last Olympics (she has said that she’s ready to start a family with her husband and fellow swimmer Diogo Yabe), but she will get one more opportunity.

Laure Manaudou took 2nd in a 1:01.02; she didn’t quite answer her coach Brett Hawke’s plea to “get under 60 please,” though I don’t think even he really expected that to happen. Still a good swim considering – it’s a similar time to what the similarly-aged Natalie Coughlin has been putting up in-season this year.

Sometimes, funny things happen in Olympic years. This will be a running theme for the next three months. Mireia Belmonte demonstrated this in her last race of this meet; though she’s been very tired throughout the grueling meet, in this one last swim, she broke the Spanish National Record (and Meet Record) in the 400 free with a 4:05.70. That skims under her old record from last month that was .07 slower.

After this race, opinions on Blemonte’s meet schedule for the Olympics should again take a new course; this was once a race that seemed like a logical drop for her. But considering her 400 IM was 7 seconds slower than a best, this time being within 3 of a medal will be enticing for her.

Denmark’s Lotte Friis took 2nd for Corinthians in 4:09.68, which is not a great time for her in the event. Argentina’s Cecilia Biagioli took 3rd in 4:12.53. After breaking a National Record in the 800 earlier in the meet, I expected her to be in the single digits (aka under 4:10) in this race as well, but this swim was actually two seconds off of her best time. The highest-finishing Brazilian was Manuela Duarte in 4:15.49.

Charlie Houchin, after a good meet where he had to step up and swim races he wasn’t used to, finished things up with a 3:50.11 win in the 400 free, which is easily his best time of the season. Off of last year’s United States World Championship team, there are few positions that are as precarious as Houchin’s, but that swim is very similar to what we saw from swimmers like Matt McLean, Tyler Clary, and Michael Klueh a few weeks ago in Indianapolis. He’s still in the hunt for the Olympics.

Minas dominated this race, and took the 5 spots (6 out of 7) in the event. That included runner-up Juan Pereyra from Argentina in 3:51.45. That’s just half-a-second away from his National Record.

So Maranhao is unrested and untapered for Maria Lenk?
Pencil her in already for Olympics medal!

Aswimfan, YES, Joana Maranhão went to Mexico, and got typhoid fever due to Salmonela, and was hospitalized for 8+ days. You are right about her: she didn’t taper or res: she TRAINED through the meet. Two hours of training right before finals.

Good for her!
She’ll be smashing in London.

Kaio Marcio is more likely to swim the butterfly leg on the medley relay.

Brazilians still have another chance to make the FINA A times in the events that are still open after Maria Lenk (May 9th-10th I am not sure..). So, had Fabíola not made the cut here, she would still have another chance. And you know what: she swam the fly for team points, and wasn’t so far from the time cut: my guess is that she may try to swim the fly again to see if she is able to grab the second spot.

That goes for Glauber Siva: he hasn’t made the team yet. He will have another chance. I hope he is able to… Read more »

nadador,
i will be hoping to Glauber be strong.I think he can do a lot of good for our medley relay.
Did you see Maranhao on TV?She hopes for a 2.07.I believe she can do that mark.

Nice interview with coach Alberto in cbda site about pro16.Wow!Pereira was expecting 1.56 low, now i know the why he got so mad with 1.57.11…

And I’m not surprised by the slow meet of Laure Manaudou. She’s an absolute diva. Since she knows her boyfriend isn’t qualified for the olympic games she’s in trouble. I hope she will quickly forget this story to be focused again on her training. I wish her all the best.

Braden, instead of a photo of Thiago Pereira, I’d prefer a photo of Mireia Belmonte Garcia. It’s always a pleasure to watch her.

bobo gigi,
what is more impressive about Belmonte was the fact she was doing weights between sessions in Maria Lenk Trophy.And still made a spanish record!