Basson, Chandler & Burckle To Be Inducted Into Arizona Sports Hall of Fame 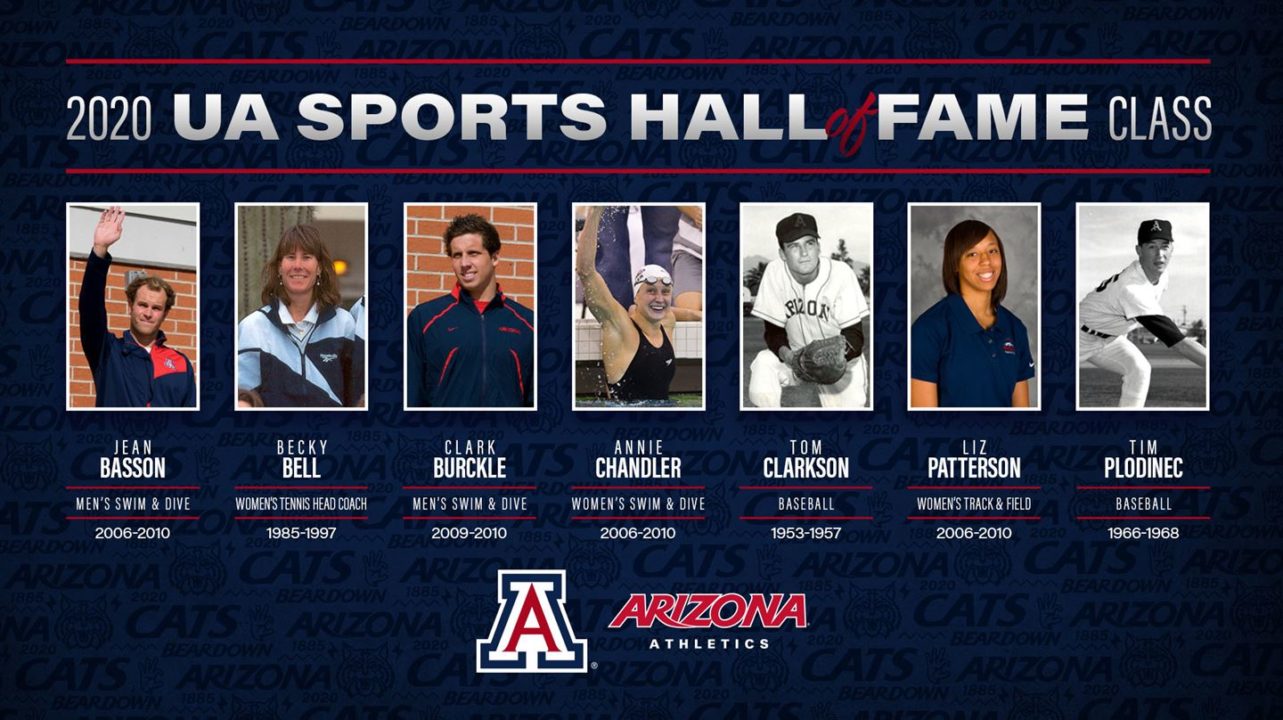 Jean Basson, Annie Chandler and Clark Burckle will be among seven athletes inducted into the UA Sports Hall of the Fame with the class of 2020. Current photo via Arizona Athletics

TUCSON, Ariz. — Seven distinguished Wildcats will be honored with an induction into the University of Arizona Hall of Fame as part of the Hall’s 2020 class.

The official induction is scheduled to take place on Friday, Aug. 28 at the Westin La Paloma Resort. Registration begins at 5:30 p.m., with a ceremony and dinner beginning at 6:00 p.m. Tickets can be purchased for $50 per person, or $500 for a ten-person table.

Basson proudly represented the Arizona Men’s Swimming and Diving program for four years from 2006-2010, during which time he picked up an astonishing 15 All-America honors, a pair of Pac-10 Conference championships in the 500-meter free event, and earned both individual and team NCAA Championships. After wrapping up his illustrious collegiate career, Basson went on to represent his home country of South Africa in both the 2008 Beijing and 2012 London Olympics.

Bell, who steered the Women’s Tennis team for 12 years from 1985-1998, is the most accomplished tennis coach in Arizona Athletics history. Her teams made 11 NCAA postseason appearances and posted an NCAA Doubles Championship in 1993. Five times, Bell’s Arizona program ended the year ranked among the Top 10 teams in the nation, including the 1996 squad that finished the season at No. 5. She steered 10 athletes to 17 All-America honors and was named the ITA Western Coach of the Year twice in 1992 and again in 1993.

Burckle, another former member of the Wildcats Men’s Swimming and Diving program, made his mark on Arizona athletics. After transferring from Florida, Burckle capped his career and senior year with Arizona with an individual national championship in the 200-yard breaststroke in 2010. His outstanding performances in the pool helped lead the Wildcats to a third-place team finish in the 2010 NCAA National Championship and earned him a pair of All-America recognitions.

Chandler was a four-year competitor on the Women’s Swimming and Diving team from 2006-2010. While with the Wildcats, she took home an individual NCAA Championship in the 100-yard breaststroke, six NCAA relay championships, seven individual All-America nods, a Pac-12 team championship, and two Pac-10 All-Academic recognitions. In addition to her individual success, Chandler was crucial to the success of the 2008 Arizona squad that took home an NCAA National Championship.

Clarkson notched three highly-productive seasons in Tucson with the Wildcats Baseball program and posted a career batting average of .410 with 103 runs scored and 97 RBI. His 1957 batting average mark of .434 stands as the fifth-best single season mark in Arizona’s wooden bat era (1950-1992); the performance also earned him a First-Team All-America nod from the American Baseball Coaches Association. After concluding his collegiate career, Clarkson spent one season in the Chicago Cubs minor league system before ending his career to complete a tour of duty with the United State Army.

Patterson excelled with the Arizona Track and Field program for four years from 2006-2010, picking up numerous titles and awards along the way. While in Tucson, she earned five All-America recognitions, a pair of Pac-10 high jump championships, and polished off her sparkling collegiate career with a pair of individual NCAA Championships in the outdoor (07-08) and indoor (09-10) high jump events.

Plodinec, the second former Arizona Baseball player in the 2020 HOF class, logged two years with the program from 1966-1968. On the mound, Plodinec dominated his opponents to the tune of a career 18-7 record with 2.12 ERA and 163 strikeouts. To this day, his career ERA stands as the sixth-best mark in school history. Plodinec’s 11 complete games during the 1968 season are 10th most in program history, and helped earn him a First-Team All-America nod from the American Baseball Coaches Association. Following his college career, he was selected by the St. Louis Cardinals in the 1968 Major League Baseball draft.

The entire list of members in the UA Hall of Fame can be found online at ArizonaWildcats.com.

For questions about the University of Arizona Sports Hall of Fame event, please contact Elizabeth Cavolo, Coordinator of Special Events at the Jim Click Hall of Champions, at [email protected] or at (520) 621-2331.

For information regarding nominations and the selection process for the University of Arizona Sports Hall of Fame please visit this link.

No mention of Clark representing the US in the 200 breast at the 2012 Olympics?