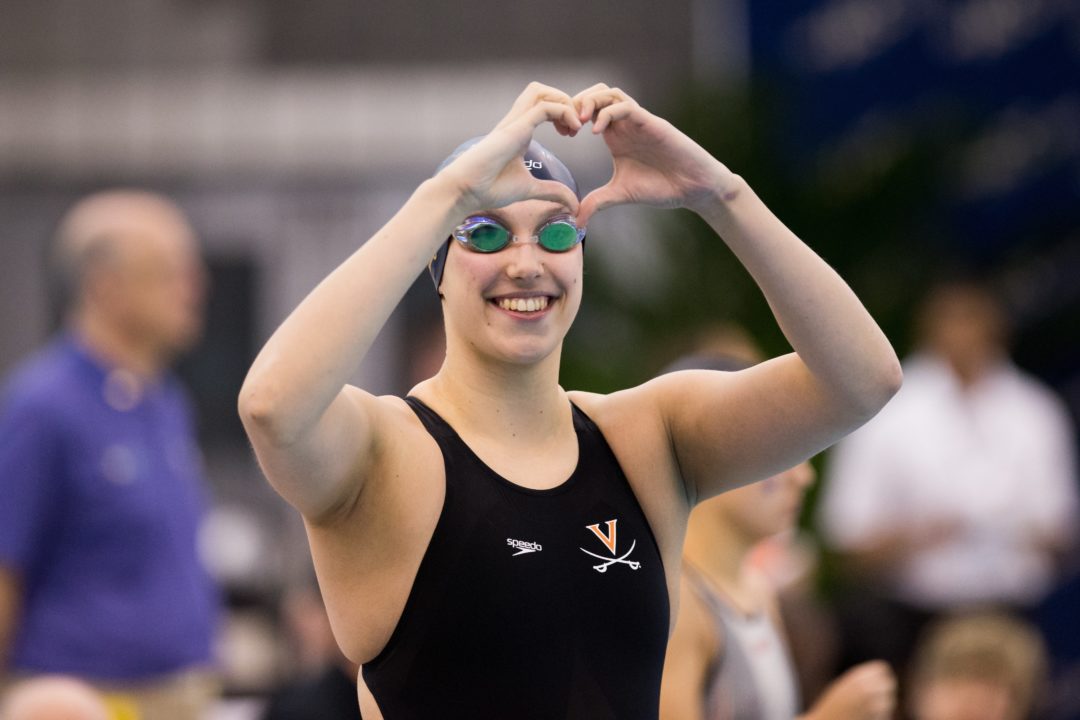 Among the great backstrokers in the SEC, Big Ten, and Pac-12, Virginia's Courtney Bartholomew pulled the ACC back into the conversation this weekend at the Ohio State invitational. Current photo via Tim Binning/TheSwimPictures.com

The final day of the 2013 Ohio State Invitational featured a lot of great swims, from all corners of the competition. One that really stood out, however, is the 200 backstroke swum by Virginia’s Courtney Bartholomew, which is one of the great all-time in-season swims we’ve ever seen at the collegiate level.

Bartholomew was a 1:50.55 to win the 200 yard backstroke on Sunday evening, topping her fellow sophomore, Florida’s Sinead Russell, who was a 1:51.44.

Bartholomew went out like a rocket, turning in 54.35. That first half seems unrealistically fast, until we consider that her three 100 yard backstrokers at this meet have been 50.8-51.0-50.7. By comparison, opening in a 54-low seems like a relative coast. Thus it’s no surprise that she also had the fastest back-half of the field as well.

That time for Bartholomew moves her into position as the 8th-fastest of all-time, though she’s still a ways behind the all-time best done by Cal’s Liz Pelton as a freshman last year at 1:47.84.

Now we’ll wait for Pelton’s answer, perhaps at Winter Nationals. Remember that she broke the American Record mid-season last year, which is the only mid-season done by a collegian ever faster than Bartholomew’s swim.

She wasn’t the only spectacular swim of the session. In the women’s 1650 free, Florida’s senior Alicia Mathieu swam a 15:46.17. That’s her lifetime best by 6 seconds – clearing the time she swam for 5th at NCAA’s last year. That time would have placed 2nd at last year’s national championship meet, just behind USC’s Haley Anderson, though Mathieu will have to contend with Stephanie Peacock this season.

That swim broke the old Florida school record of 15:50.86 set by Tami Bruce back in 1988 – that was the oldest record still on the books at Florida for the women’s team (only the men’s 1650 is older in their list, from 1986, but Frayler is knocking on that record’s door as well).

Mathieu’s teammate Elizabeth Beisel took 2nd in 15:56.55, and Virginia freshman Leah Smith took 3rd in 15:57.44, just missing a personal best of her own by two-tenths of a second.

Florida got another great swim from sophomore Natalie Hinds, who won the 100 free in 47.67 to jump to the 2nd in the National rankings. Maybe even more significantly is that Hinds’ swim was more than a second faster than she was at this same meet last season.

Purdue’s Carly Mercer took 2nd in 48.43, and another Florida Gator Ellese Zalewski was 3rd in 48.78. Virginia’s top finisher was senior Emily Lloyd who was 6th in 49.92; that result would prove more significant in the team battle as the meet rolled on.

That’s Luthersdottir’s best time by almost two seconds. The breaststrokes were Florida’s big question-mark this season, as they don’t have much backing up their Icelandic senior. If she continues to swim this well, however, along with how well the rest of the Florida women are performing, they seriously enter the conversation for the NCAA team Championship.

Kentucky’s Tina Bechtel finished the last individual event of the meet with a 1:54.21 in the 200 fly, breaking the Meet Record. That just missed giving her a second Meet Record at this meet after already achieving one in the 100 yard race.

After that race, Virginia had a 13-point lead headed into the closing 400 free relay. There was little doubt, after the results of the individual 100, that Florida would win this relay. They did just that, in a new Meet Record and an NCAA Automatic Qualifying Time of 3:14.75. That included a 47.01 split on the 2nd leg from Hinds.

The question of who would finish 2nd, though, would determine the final outcome of the team scores. That second-place finish went to Ohio State in a 3:17.42 (Aliena Schmidtke was a 48.99 on their second leg), leaving Virginia 3rd in 3:18.61. Bartholomew had a good split of 49.04, but overall Virginia’s strength still seems to lie in their medley, rather than freestyle, relays.

The men’s meet maybe didn’t have quite the memorable swims on the final day that Mathieu and Bartholomew put up, but they did have their fair share of impressive results none-the-less. Seniors Sebastien Rousseau and Marcin Cieslak went 1-2 in the men’s 200 fly, with times of 1:42.88 and 1:43.29, respectively. That swim for Rousseau is a new Meet Record, and an NCAA Automatic Qualifying Time. Though Cieslak’s mark is not technically an automatic qualifier, he should have no concerns about earning his ticket to Austin in March either.

The Florida men very-nearly swept the final day of events. Sophomore Arthur Frayler began the session with a 14:52.63 in the men’s 1650 freestyle. His freshman teammate Mitch D’Arrigo broke 15 minutes for the first time in his career with a 14:56.21 for 2nd, and Virginia’s Jan Daniec was 3rd in 15:00.90.

The one exception to the Florida men’s top-end dominance came in the men’s 200 backstroke, where junior Connor McDonald was a 1:40.83 for the win and a new Ohio State School Record, breaking the 1:41.22 that Andrew Elliott swam in 2012.

McDonald went out a full second faster than the rest of the field, and had no problem holding on as he had the best back-half as well. The wall that McDonald is going to run into this year is that we might have the deepest men’s NCAA 200 backstroke field ever – given that only one of the top 6 from last year’s meet graduated, and Murphy and Conger are both freshman, it could very well take under 1:40 to just make the A Final.

His win was part of an authoritative 47-point win for the Buckeyes in the meet, despite Florida’s big charge on the final day of the meet.

Eduardo Solaeche-Gomez broke his own Meet Record from last year with a 1:54.69 in the men’s 200 breaststroke. That makes him almost half-a-second better than he was mid-season last year, as Solaeche-Gomez is building off of a very good 2012-2013 season.

Liz and Missy will swim 1.47 at the US short course nationals.

Florida’s women’s team reset school records in the 100/1650 free, 100 fly, 100/200 breast, and the 400 medley relay. Hilda Luthersdottir is the team MVP. She has evolved into the elite NCAA breaststroker that Florida has most needed. The men’s team shattered the meet records in most every event and posted the top times in the country in a number of races. Comparing the times both teams did at this meet last year to this year, it’s night and day. If Brad deBorde’s Twitter is correct and they only got three days rest for this meet (which would explain some uneven performances and how Virginia’s women and Ohio State’s men were able to hang with them in points), something very… Read more »

Congratulations to Augie, his staff, and his swimmers on a very exciting performance in Ohio. This is the first step in showing people that he will be very successful at UVa. Many swimmers turned in legit time cuts, and it wasn’t like it was just 2 people. Way to go Augie!