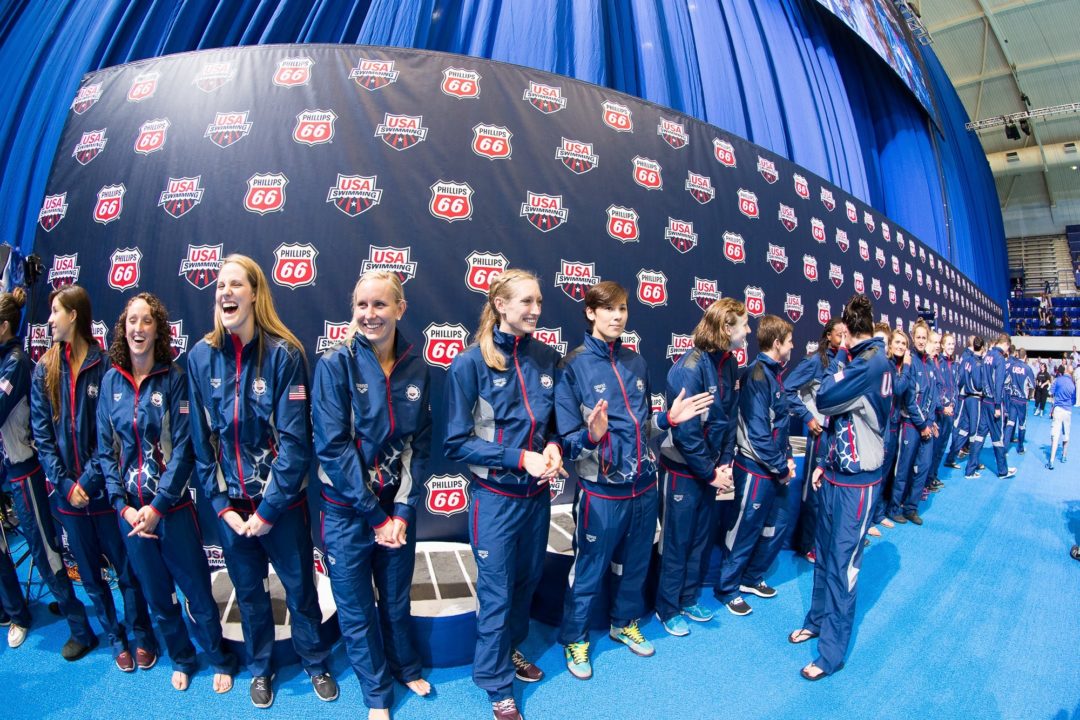 Amanda Smith is a former swimmer at USC, and contributed this report. Follow Amanda on Twitter at @Amandakay_s

Heading into the final night of World Championship Trials, 18 women & 19 men had secured roster spots. The women had eleven doubles, while the men had ten.

12 doubles allowed all relay alternates a trip to Barcelona

As a reminder, here was the new USA Swimming selection criterion for World Championship Trials:

Katie Ledecky’s win the 1500m freestyle clinched the twelve double for the women’s team. Natalie Coughlin, who went on to win the 50 freestyle, would get to swim the 50 free individually and 100 freestyle as a relay alternate; plus, Chelsea Chenault would earn her 200 freestyle relay spot as well.

Connor Jaeger swept the distance races as well, earning the distance double at Worlds. It is most likely that Chloe Sutton & Michael McBroom, who finished second to Ledecky & Jaeger in the Non-Olympic distances will be the second USA representative at Worlds – this is NOT guaranteed though until the meet.

Caitlin Leverenz earned her spot on the team with a win in the 200 individual medley. Elizabeth Beisel, with her second place finish in the 200 IM, will give her two IM swims on her ticket to Barcelona.

Ryan Lochte’s wire-to-wire win in the 200 IM secured the eleventh double, and when Conor Dwyer finished second, that created the twelfth double needed for the relay swimmers. That clinched Ricky Berens’s spot on both the 400 & 800 freestyle relays.

Very feew of the winners of the 100s of strokes (aka, fly, back, and breast) won the 50s at this meet (David Plummer in the men’s backstroke and Eugene Godsoe in the men’s butterfly are the two exceptions). It is most likely that at Worlds those swimmers will earn that swim as the second USA swimmer (Matt Grever’s then for the 50 backstroke). Like the distance events, this is NOT guaranteed until the meet.

21 women & 21 men will represent the USA in the pool, plus 6 women & 6 men in the open water events at the World Championships next month in Barcelona.

Finally, here is your official roster:

Hmm…I guess they didn’t push the 26 mark after all. Were there more doubles than expected?

Sean – I think nobody really knew much of what to expect this year. I think that fewer swimmers being at the meet meant fewer swimmers surprised, and those that did surprise (Godsoe?) sometimes did so in multiple events. The distance races being sweeps for Jaeger/Ledecky was probably the biggest factor in the rosters filling up. That’s something we haven’t seen a whole lot of in the U.S. in the past, though it’s not really a surprise that it happened given how hot those two are right now. Will be interesting to see what USA Swimming does going forward for 2015 based on what they saw in this meet, especially with regard to those 50’s. It’s pretty clear that the… Read more »

What about Nathan Adrian with his win in both the 50m and 100m freestyle?

Katherine, I’m not sure I understand your question. Nathan is listed above in both races. Is there anything specific you wanted to know? Let me know and I’m sure I can track down an answer!

You mentioned that “None of the winners of the 100s of stroke won the 50s at this meet”, but didn’t Nathan win both of those strokes?

Oh, I gotcha. Usually in swimming when people refer to “stroke” races, it means “other than freestyle”. That’s what she meant here, referencing specifically the 50 meter races that aren’t swum at the Olympics. Recognizing that everyone might not refer to these races in the same way, I’ll go back and clarify. Thanks for bringing that up Katherine!

Got it. Thank you for the explanation. Still a novice understanding all of the swimming terminology 🙂

Braden, I have a question. For the 2nd place finishers in non-Olympic events who are already on the team for other events, e.g. McBroom, Sutton, Grevers, etc. why would they not just be added automatically for those events, since it wouldn’t increase the roster size and they are going to be there already??

Also could someone like Kendyl Stewart go for the 50 fly if there were enough doubles and Vollmer/Donahue didn’t want to swim it, or is she out of luck? Thanks.