Australians Begin Arriving in Manchester This Weekend for Pre-Commonwealth Camp 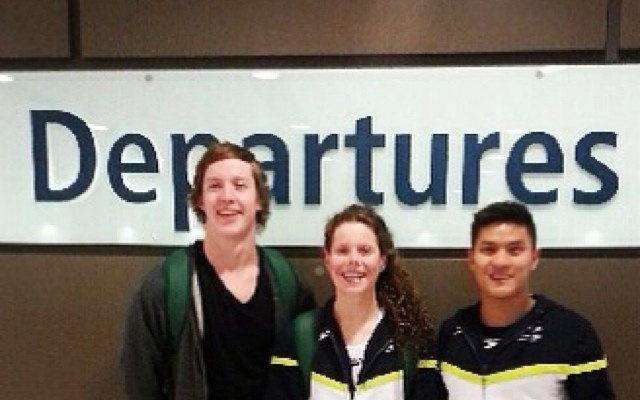 Daniel Tranter, Laura Crockart, and Kenneth To prepare to depart the Sydney Airport on Saturday en route to the Commonwealth Games staging camp in Manchester, England Current photo via Kenneth To

The 59-strong Australian Swim team united in Manchester today, Saturday July 13 for a week long staging camp ahead of the 2014 Commonwealth Games in Glasgow.

The Australian team will come up against the best swimmers from England, South Africa, Canada and New Zealand, along with a number of other Commonwealth nations in just under two weeks and will use the staging camp to put the final touches on their preparations and fine tune their race skills.

Training at the Manchester Aquatic Centre, Swimming Australia’s Performance Director Michael Scott said Manchester was a logical choice for the staging camp ahead of the Commonwealth Games.

“Manchester is an ideal location for the team to come together in their final phase of preparation, the city is within close proximity to Glasgow and the Aquatic Centre boasts world class facilities,” said Scott.

The team will depart Manchester for the village in Glasgow on Sunday July 20 with the swimming commencing on Thursday July 24.

The Commonwealth Games will be live and exclusive on Network Ten, check your local guides for details.