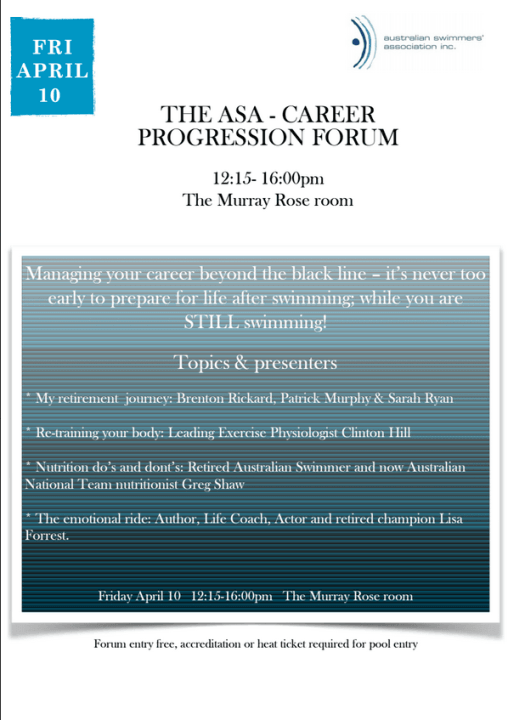 30 para-swimmers will represent Australia at this summer’s IPC World Championships in Glasgow, Scotland. The squad was selected at the conclusion of the Australian Swimming Championships this week.

A legend and a rising star, Grant Hackett and Mack Horton each qualified for the Australian World’s team with their performances this past week.

The Australian Swimmers Association is putting forth a program Friday between heats and finals at the Australian Trials to target athletes who’ve made nationals cuts and may need advice looking forward past swimming.

The event will allow any swimmers at the meet to come and listen to a panel of former Australian star athletes speak about their journey of transitioning from their lives in the pool to the real world.

Famous Australian athletes Brenton Rickard, Patrick Murphy and Sarah Ryan will all be presenting their retirement journeys at the panel.

Following that, exercise Physiologist Clinton Hill will speak about ret-training your body. Former Australian swimmer Greg Shaw will then take the stage to discuss how to properly change nutritional habits upon retirement.

“The research that I did last year highlighted that two of the areas where people when they retire struggle is with weight gain and injury. That in turn can lead to not necessarily depression but, very negative self esteem and body issues. We thought that those two were very important things to tackle along with the actual journey of retirement,” said former Australian swimmer and current general manager of the Australian Swimmers Association Daniel Kowalski.

Kowalski, an Olympic gold medallist and former world record holder, is one of the pioneers of this new initiative. He believes that it’s going to truly help Australian athletes who are looking to transition their lives from the pool to the real world. Once of his goals is to, “break down the stigma that you only start focusing on life without the black line once you’ve retired.” Kowalski wants to educate all Australian swimmers about this so that when their time comes, they’re prepared for the switch.

There have been many star Australian athletes such as Ian Thorpe who have struggled with the transition. Thorpe came out recently to say that he experienced depression in the years leading up to and following his retirement. Kowalski believes that this program might prevent others from finding themselves in similar situations, “They were a big factor because people were saying the sport as a whole wasn’t doing anything [for the athletes], and the sad thing is they were the only ones that we know about, I’m sure there are many more that have fallen through the cracks that we aren’t aware of.”

As for the actual event, which will be held Friday, Kowalski said, “we hope that we’re able to capture them, and give them as much advice as possible and hopefully they can use that moving forward.”

The Australian Swimmers Association has  recruited some of Australia’s best athletes to be on the panel. It’s a goal of Kowalski’s to bring back former swimmers and alumni to speak about their various skill-sets and see if they’re in a position to give back to the young swimmers.

“The idea is we want to give swimmers some knowledge and insight on how to detrain as a swimmer and retrain as a normal functioning human without spending hours upon hours in the water.”

This week will prove to be the first crack at starting the program. After that Kowalski hopes to roll the program out nationally so that eventually it will be in every major city in Australia and easily accessible to all athletes who need it.

As for todays session Kowalski said,“If we can positively impact a handful of swimmers and give them some real guidance and understanding of what they can eventually expect, and make them look at retirement or the transition or career progression journey in a positive way then that’s a win.”

Fantastic idea and bravo to the Australian Swimming Association!

There are two views here. One is that years of intensive exposure to a poison called chlorine which is also used in chemical weapons can be detrimental to some athletes. Another is that sudden drop in endorphin generation upon retirement can also be destructive.