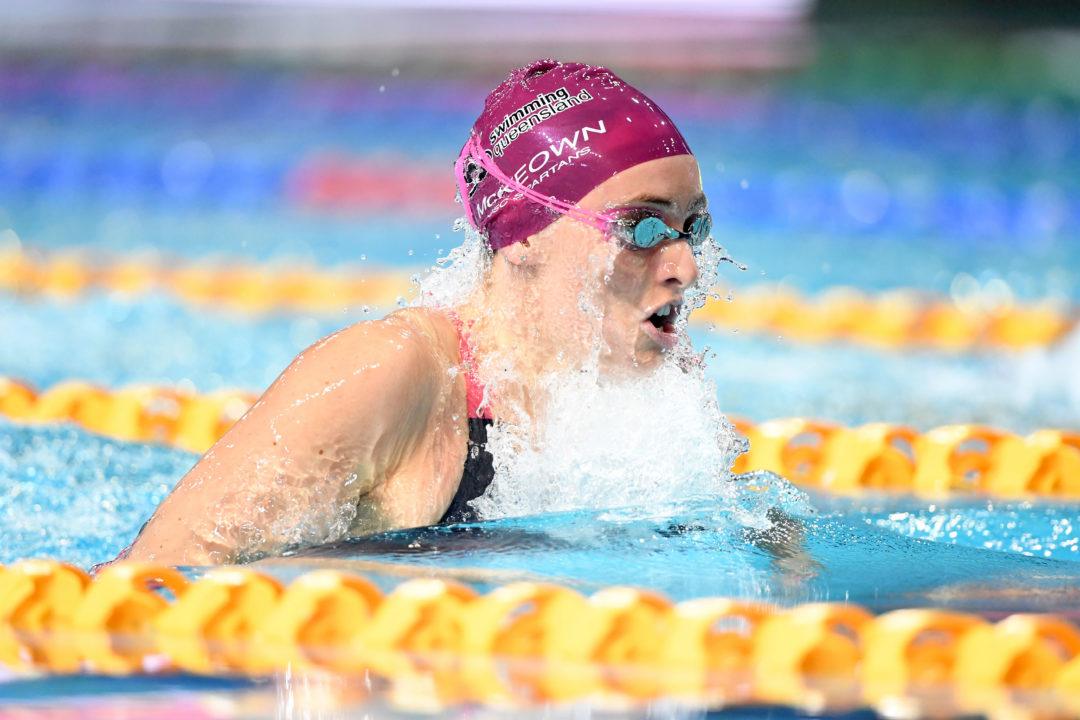 Having been one of the mainstays of the Australian team, McKeown was a two-time worlds medalist and 2016 Olympic silver medalist. Archive photo via Delly Carr

Taylor McKeown, a longtime veteran of Australian swimming, has announced her retirement from the sport. She concluded her career by competing at the 2022 Commonwealth Games, where she placed sixth in the finals of the 200 breast.

My last Commonwealth Games and last swim, ever! ✨ What a way to wrap up my swimming career than competing in my 3rd Commonwealth Games, in a 200 breaststroke final and with @kaylee_mckeown on the team, killing it in her own races ❤️ The Australian team has been epic to be a part of and has given me many lifelong memories. Thank you to everyone who has watched me and cheered from my first open international appearance in 2013, through till now. I’ve accomplished everything I’ve ever wanted to in my swimming career, and always took pride in my ability to train bloody hard and never give up 🔥 My training squads have all been incredible in their own way over the years and I’m thankful for the memories, encouragement and strength they’ve bought me. To my coaches, Chris Mooney and Michael Bohl, you both made this all possible! I cannot express how grateful I am to have been guided and pushed by two of the world’s best coaches ❤️ My family have been there since day 1, to drive me to training and fully support me in the best way they could, I am so lucky to have them and cannot thank them enough! @lachlan__carter has had to put up with my in my final years of swimming and never failed to pick me up when I was down, or congratulate me when I’ve been swimming fast. He’s been amazing to me and I feel like the luckiest girl! Finally, a massive thank you to the sponsors who have supported me throughout my career! I’m so full of gratitude, happiness and excitement for what lies ahead. Thank you all ❤️ Time for me to sashay.. away 👸🏼#retirement #748 #signingoff

McKeown made her first major international meet appearance at the 2014 Commonwealth Games, when she won 200 breast gold in a new best time of 2:22.36. She followed that performance that year with a bronze medal at 2014 Pan Pacs, where she clocked a 2:22.89. After 2014, she became a mainstray on the Australian national team, helping her country win 2015 and 2017 World Championship bronze and 2016 Olympic silver by swimming breaststroke in the 4×100 medley relay.

In 2018, McKeown faced some challenges in her swimming journey. Prior to the 2018 Commonwealth Games, she injured her knee and had to undergo surgery. She failed to defend her title in the 200 breast at that meet, missing the podium and placing fifth. Then, in 2020, her father passed away after a two-year battle with brain cancer. McKeown failed to make both the 2019 World Championship team and the 2020 Tokyo Olympic team, but bounced back in 2022 with a third place finish in the 200 breast at Australian Nationals to qualify for the 2022 Commonwealth Games. Her time of 2:25.32 from nationals this year was her fastest since 2018.

The McKeown family legacy will continue to live on in swimming, as Kaylee McKeown, Taylor McKeown‘s younger sister, is still actively competing in the sport. Kaylee is the world record holder in the 100 back and a three-time Olympic champion.

Never forget about how this woman, back in 2017, repeatedly harassed a 19-year-old dolphin trainer on Instagram, leading her followers to viciously join in, which eventually led the trainer to quit her job.

nah, the trainer reacted to a daily mail story and taylor politely responded with some facts. most dolphin trainers quit.

How come many American swimmers don’t come out and announce their retirement?

I mean, I feel like there’s been a few already this year? Kelsi Dahlia, Andrew Wilson, and Maxime Rooney all did via Instagram.

Townley Haas also did it.

It must be pretty rare to be an Olympic silver medallist and still not be the most successful athletic sibling.

Great career and I love watching her on Instagram cheering on Kaylee.

Look at Flo and Laure Manaudou, you can even be an olympic champion and still not be the most successful athletic sibling, life’s funny that way !