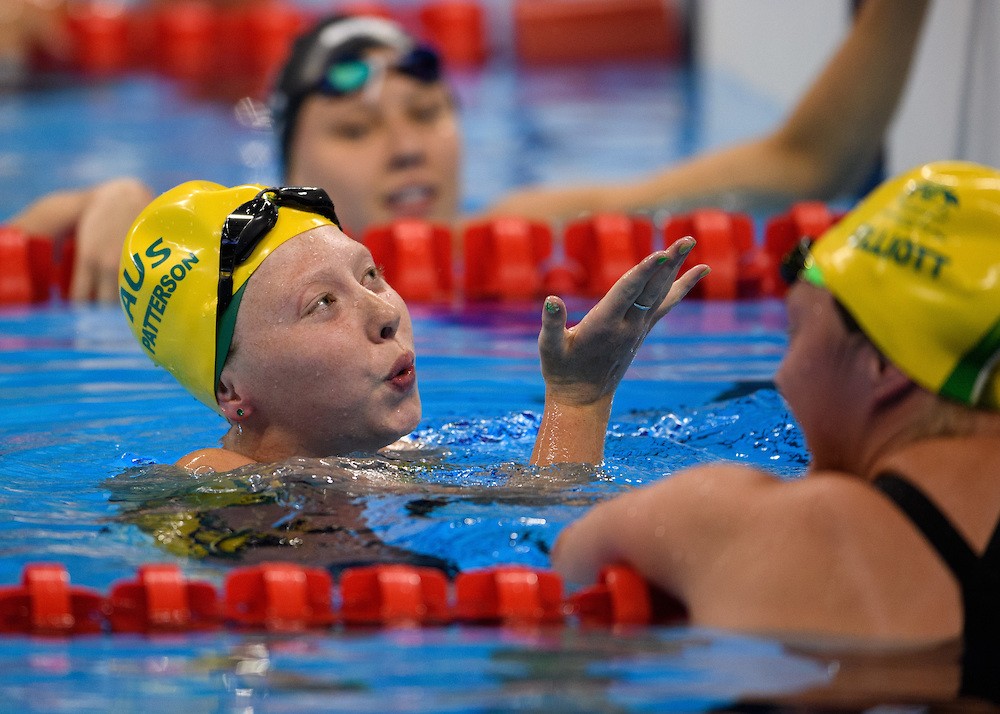 Australia officially named its roster for this summer’s IPC World Championships this week, including 7 Paralympic gold medalists from 2016... Archive photo via Bob Martin for OIS

Belarus’s Ihar Boki started off the Para Swimming European Championships by winning the 100 fly S13 final, breaking his own World Record from 2016 by .13.

Australia officially named its roster for this summer’s IPC World Championships this week, including 7 Paralympic gold medalists from 2016 on the 18-person roster.

They will now be among 18 members of that team in the 20-strong Para Dolphins, named for the nine-day Championships.

They will be joined by two newcomers to the team in NSW pair,  12-year-old Jasmine Greenwood from the Bay and Basin Club in Jervis Bay and 19-year-old Abigal Lihou from Ferny Hills – who also set two new world best times during the week-long Championships.

Watson, who was only classified into the S4 wheelchair class last June wet to the Games as a real rookie and came out with gold and an new Olympic record in her pet event, the 50 metres freestyle.

But she has returned home to up her training under Chandler club coach Rob Hindmarsh at the Brisbane Aquatic Centre and build on her daily routines to smash two world records in one day, lowering her time to 37.87.

Swimming Australia’s Paralympic Program Manager Adam Pine is delighted with the way his athletes have returned from Rio and picked up just where they’ve left off and is full of praise for Watson.

”Rachael has demonstrated just what you can do if you work on your life skills as well as your swimming skills and that is just what she has done,” said Pine.

“To come where she has come from in less than 12 months is quite extraordinary and to see her improve since Rio is a real credit to her and her coach.

“Overall the return of these athletes has been great – I couldn’t be happier, especially with the team for Mexico capped at 20 and we have over 30 athletes who have met the qualifying standards.”

It also includes the following:

One manager and one coach desperate… Read more »

Sour grapes? I think you parents need to take a good look at yourselves and realize you are jeopardizing your swimmers place on the team.

You can always tell the new parents haha.

Why are you saying that Watson broke the record with no training? I don’t know her but where is your evidence to say she has apparently had a break and not trained? Sounds to me like she’s added more sessions. I don’t know. Someone who knows her should ask and then tell all. Will she have a carer like she did in Rio? Maybe she won’t make it to worlds after all as isn’t mexico of high atlitutude? Sounds too risky to take someone like Watson into an are with zika when possible relapse could happen. This sort of info regarding function of all athletes should be made public so that you and I know what they can and can’t… Read more »

Elliott and Patterson are up for testing this year. Don’t worry nothing corrupt has ever happened in Mexico. My best guess is that Elliott stays an 8 and Patterson gets moved up to a 9. Elliott may be thinking ahead and intentionally not trying for peak form this year. some of her swims were not very close to her best this past week and Patterson I don’t think really cares but her 400fr would have won a gold medal as an S9

I know on the other thread about Watson winning there’s a comment about her sitting on pool deck unsupported. I looked at the footage from this week and it would appear she sits with her hands back for support. I look up the classification assessment and they test core by if a swimmer can sit unsupported ie no hands. Trimi can sit unsupported and she does big pbs in 100 and 200 free plus very good at form strokes. So you’re saying Watson is in the wrong class but S5 up you need core. She might be reclassified this year with fellow Americans complaining and if she was and she got S4 again then surely that’s her function. Do you… Read more »

And what about American Leanne Smith?????

Chinas JIAO CHENG another S4 swimmer did big pbs in Rio and took gold and she’s an S4!!!!! Maybe the S4s are getting faster like the S5s 6s etc. And so….

I can ask questions, do some research, write to IPC and comment freely on swim blogs. No one is going to be harmed by my actions. It’s called freedom of speech. Jeopardise team placements for ousting cheats? Yeah that’s a healthy culture in Australia. I wouldn’t wish that environment on any young person thank you very much. Surely if a swimmer swims the time, they’ve made the team? Obviously not in Australia according to Aunty T!

Elliott swam like a burst mattress like she always does at National and State competitions. Compare her to Emma McKeown. She was at the top of her game. Elliott wasn’t, nowhere near, 17s slower in 400free. She’s now got her past results on… Read more »

Hello Shonad, whilst I think it is brave of you to voice your thoughts I would like to voice a few of mine from an impartial side.

1. You say that you have done some research on all of the above swimmers. My question is, what information did you come up with and is it correct information not just word of mouth from other parties. Have you got medical evidence to back your complaints at all?
2. No one is going to be harmed by your actions. By voicing your opinions, which yes is freedom of speech, I totally agree, but I would like to know what your thoughts would be if one or a few of these… Read more »

Mary,
1) One does not need to be a swimmer – or a parent – to recognise fraudulent activity and to be completely abhorred by it.
2) It is not difficult to follow swimmers activities and history, everything is on line these days. The Australian Swimming Championships were streamed over the Internet and broadcast on Channel7 live. Every stroke and step was recordable.
3) Which swimmers do you suggest should sue for libel? The ones pretending to have CP or the one who once again swam like a burst mattress (18s over PB in 400fr) at a NATIONAL level competition in preparation for her impending reclassification? The truth is watertight defence against defamation.
4) The information… Read more »