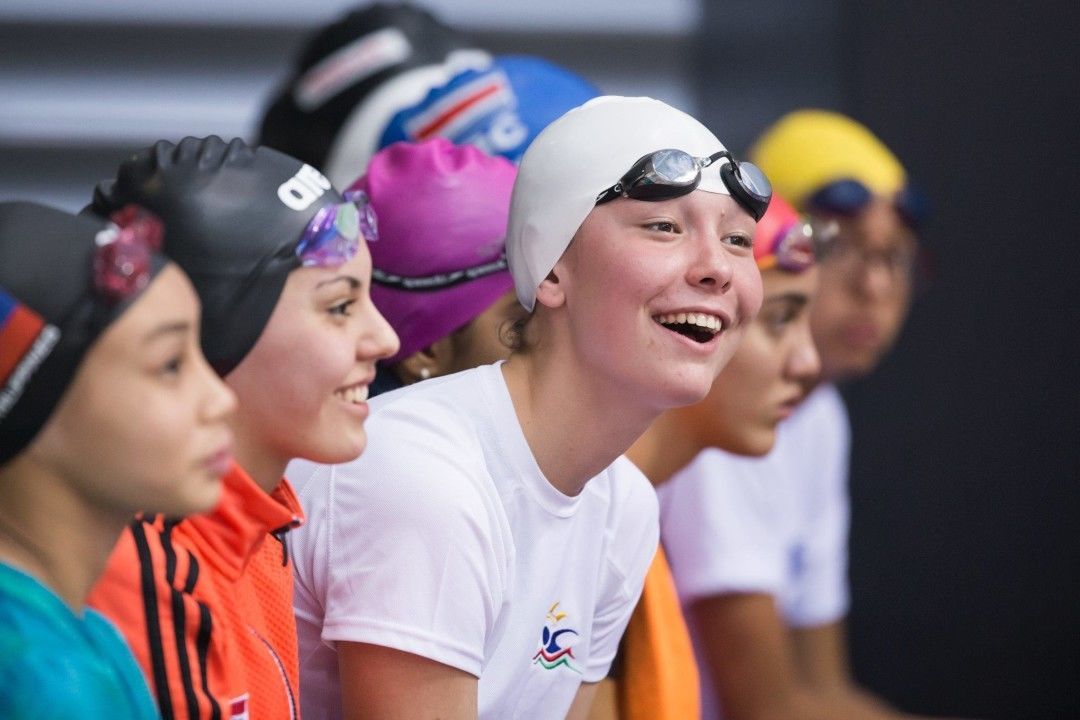 While the Russians and Americans have as many medals, 8 golds leaves the team from Australia atop the medals table... Current photo via Adrian Seetho/SSA

While the Russians and Americans have as many medals, 8 golds leaves the team from Australia atop the medals table at the 2015 Junior World Swimming Championships for the 5th time in 5 days on Saturday.

Both team USA and team Australia won gold medals on the penultimate day of the meet; Sean Grieshop took the men’s 400 IM in a minor upset over the Junior World Record holder Brandonn Almeida of Brazil.

The Australians’ gold medal came from the women’s 400 free relay that demolished Russia’s Junior World Record by a second-and-a-half.

The three other winners took their respective countries’ first gold medals of the meet. Italy’s Simona Quadarella won the women’s 1500 free; New Zealand’s Gabrielle Fa’amausili repeated as the 50 back champion in a new Junior World Record to cool off the red-hot Minna Atherton; and Andrii Khloptsov won the men’s 50 fly.

The headline is misleading. It should say Australia leads in GOLD medals but it looks like the USA is first with total medals 19 vs 14 for AUS and RUS.

Why is France MIA from this meet and specifically from any medals? The underlying question is: France is one of the elite swimming powers at the Senior/international level but a non-factor in these Junior/international meets. Did they send a team? Where is France’s development pipeline?

I totally agree with Swimphan, it should read the aussies lead in gold medals. This is an argument that continues to go on with the idea that the only thing that counts are gold medals. Looking at the team concept the total number of medals is just as important.

A commenter on this website crowned the best teams at the WC as Australia and GB. I could not understand that reasoning since neither led in medals OR gold medals. Just because one nation (USA) underperforms in relation to the expected results does not mean that nation could not still be the best team.

SwimPhan- France did not send a team to this meet. If you look at the psych sheet, there are entry lists by country at the bottom. They don’t have any entries.

There are no French swimmers at this meet. All our best juniors, and they are not many, were at the European games in June and at the European youth olympic festival in July.
But overall, France has never been good in juniors. Most of our athletes mature and develop very slowly. And we don’t have a big depth. “France is one the elite swimming powers at the senior:international level….” yes; but until 2016. And thanks to 3 or 4 names. When they will retire…. At least we have had more… Read more »

About his comment which had disappeared? No, I was not kidding. His comment had disappeared. It’s back now.
Since yesterday there’s a 0 on the right instead of the useless up/down things. What’s the signification?
Strange. Very strange. Hopefully the website is not haunted.

Bobo, do you realize that they crown a team champion at this meet? Just wondering because I would think THAT is the most important TEAM goal. I agree that it is nice to lead in the gold medal category but it not the most important one, IMO.