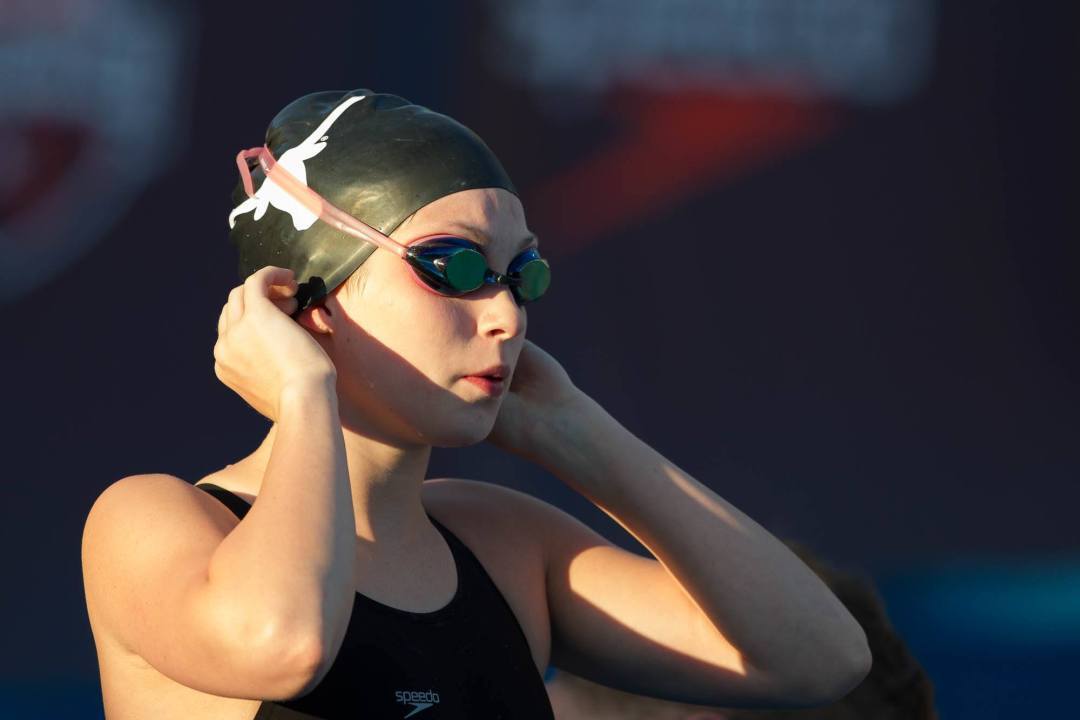 The Westlake girls were led by youngsters Victoria Edwards and Dakota Luther, while the Southlake boys got double wins from senior Carson Klein.

Austin Westlake won the first state title in the new 6A meet, getting wins from their two rising stars Victoria Edwards and Dakota Luther.

Edwards, a sophomore, blew out the 100 fly field with a 53.24, a new lifetime-best by a couple tenths. Edwards topped the field by almost two seconds, but more importantly, she moves to within .54 of the Texas state record set by future Olympic champion Dana Vollmer.

Then there was Luther, just a freshman, who won the 500 free by three seconds with a 4:48.54. That’s also a lifetime-best, and sits five seconds off the state record.

The two combined to win a pair of relays for Austin Westlake. Though Edwards was the individual fly champ, Luther took over the fly leg on the 200 medley, splitting a quick 24.51, while Edwards went 25.32 on backstroke. Catriona MacGregor and Margaret Taylor joined the team to go 1:43.72, though in prelims, the group was actually a faster 1:43.21 to break the all-time and 6A state records. That relay will return in full next year, as all members are sophomores except the freshman Luther.

Austin Westlake also won the 400 free relay, with Luther leading off in 52.00 and Edwards really popping with a 50.87 split. That split also included a .37 relay exchange as the team basically only had to not DQ the relay to win the state title. Ilse Adam and MacGregor swam the final two legs to go 3:27.24. Once again, the team was made up of three sophomores and a freshman.

Edwards just missed a second win in the 100 backstroke, coming up just short of The Woodlands freshman Lucie Nordmann. Nordmann was 53.38, just a few tenths off the state record as Edwards went 53.95.

Meanwhile Luther just missed a second win in the 200 free, taking second behind Keller Fossil Ridge’s Lauren Pitzer. Pitzer, a sophomore, was the meet’s only double-individual winner, taking this race in 1:46.18 and the 100 free in 48.72.

In that 100, Pitzer topped Humble Kingwood’s Lexie Lupton, a senior and Texas A&M commit. Lupton was the meet’s only individual record-breaker, taking the 50 free in a new all-time and 6A state record of 22.73. That time came out of the prelims, but Lupton was 22.74 to win the final by a solid margin.

Klein was unstoppable, pacing the 200 free (1:37.36) and 500 free (4:26.50) for Southlake, and fighting hard for both his wins. The 200 came thanks to twin 25.0 splits on the final two 50s to outlast El Paso Eastwood senior Leonardo Sanchez. The 500 was even closer, with Klein coming from behind to out-touch San Antonio Reagan sophomore Zachary Yeadon by just a tenth of a second.

Southlake also got a 1-meter diving win from junior Nathaniel Hernandez, who scored 613.75 points to rattle the state record of 622.05.

One state record did go down, and that was to the Klein High School 400 free relay. The team of Harry Sale, Robert Slaughter, Elijah Hoenshel and Eric Atkins went 3:02.32 to sneak under the old mark by just .05. Sale, a senior, led off in 45.00 to power the squad.

Austin Lake Travis’s Mason Tenney won twice, once individually and once with a relay. The senior went 48.56 to take the 100 fly, and also split 21.61 swimming fly on the winning 200 medley relay. Joining him were Christopher Mayer, Ben Rodgers and Matthew Connealy to go 1:32.97.

Could we also see a recap of the Texas 5a meet?

Texas- It’s on its way! A ton of meets, both high school and college, happened over the weekend, and we’re slowly knocking them all off the list

What a great meet! Watched the entire thing on live stream from New York. Westlake won the girls meet and was the only school to have both boys and girls finish in the top 5. Young roster and young coaches……look out for the future! Great showing again by Southlake Caroll and their diving makes them even harder to beat.

Could you please just concentrate on getting the Knicks back on track?