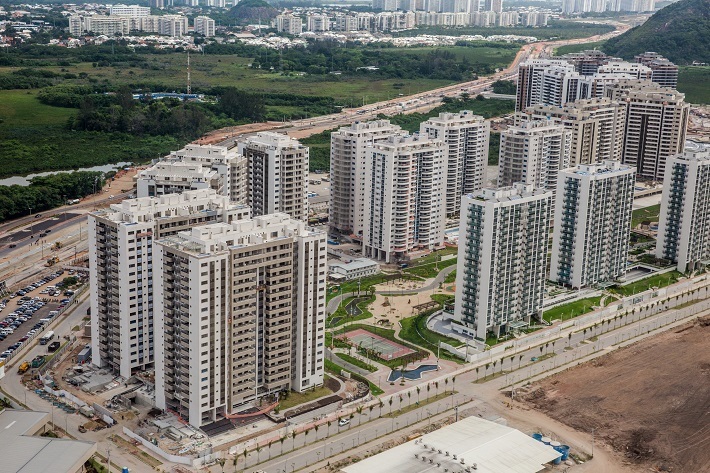 From Aussie's Chef de Mission Kitty Chiller, "﻿Due to a variety of problems in the Village, including gas, electricity and plumbing I have decided that no Australian Team member will move into our allocated building." Archive photo via Heusi Action/Andre Motta)

As the first batch of Australia Olympic athletes attempted to move into their rooms at the Athlete’s Village in Rio de Janeiro, host of the 2016 Games, they were met with a series of structural and functional problems.

The Village, whose 31 buildings containing more than 3600 apartments will be called home to 15,000 athletes and officials during the Olympic Games, officially opened on July 15th.  According to a statement released today by Kitty Chiller, Australia’s Chef de Mission, the Aussies were due to move into the Village on July 21st, but have been living in nearby hotels, ‘because the Village is simply not safe or ready.’

Along with plumbing problems, the Aussie team is reporting electrical and cleaning issues, as well as ‘a strong smell of gas in some apartments.’ Britain and New Zealand are also reportedly having similar issues, which have now been occurring for at least a week.

In Chiller’s statement, she said her team has ‘raised our concerns on a daily basis with the Organizing Committee and the IOC’ and have been ‘pushing hard for a solution.’ Chiller states that ‘extra maintenance staff and over one thousand cleaners have been engaged to fix the problems and clean the Village but the faults, particularly the plumbing issues have not been resolved.’

“There is much work to be done at the Village,” Chiller’s announcement reads.

Below is Kitty Chiller’s official statement in its entirety:

Due to a variety of problems in the Village, including gas, electricity and plumbing I have decided that no Australian Team member will move into our allocated building (B23).

I will reassess the situation this evening.

For over a week now AOC staff have been working long hours to get our section of the Village ready for our athletes.

Problems include blocked toilets, leaking pipes, exposed wiring, darkened stairwells where no lighting has been installed and dirty floors in need of a massive clean.

In operations areas water has come through the ceiling resulting in large puddles on the floor around cabling and wiring.

We have raised our concerns on a daily basis with the Organising Committee and the IOC, especially at the daily Chef’s meeting.

We are not alone, our friends from Team GB, New Zealand and others are experiencing the same problems in their accommodation.

We have been pushing hard for a solution.

Extra maintenance staff and over one thousand cleaners have been engaged to fix the problems and clean the Village but the faults, particularly the plumbing issues have not been resolved.

Last night (Saturday), we decided to do a “stress test” where taps and toilets were simultaneously turned on in apartments on several floors to see if the system could cope once the athletes are in-house.

The system failed. Water came down walls, there was a strong smell of gas in some apartments and there was “shorting” in the electrical wiring.

We were due to move into the Village on 21 July but we have been living in nearby hotels, because the Village is simply not safe or ready.

Our staff are continuing to setup as best they can for the arrival of the athletes. For those athletes arriving in the next three days we have made alternative accommodation arrangements.

We welcome a decision by the IOC to recommend to the Organising Committee that stress tests be carried out throughout the Olympic Village.

The IOC has recommended 1. A plumbing stress test and 2. A fire safety test.

Those tests will include all floors, all rooms, all fixtures, sinks, showers and toilets. As well as fire alarms, lighting in stairwells and exits.

Representatives from National Olympic Committees (NOCs) have been invited to observe the test.

From an AOC point of view, John Coates, has always stressed that for a Games to be successful, you need to get 3 things right, the athlete’s Village, the transport and the food.

There is much work to be done at the Village and we appreciate the efforts of the IOC and the RIO Organising Committee to “push things along” and solve the problems.

Cleaning is one thing, but there is no quick fix for this level of poor quality construction. If the mechanical, electrical, plumbing, and life safety systems are compromised, remedies are very time-consuming and extremely expensive, and often there’s no fix at all. Broken infrastructure signals possible concerns about the underlying structural integrity of these buildings, too.

Life safety in mid-rise and high-rise structures, especially in residential building, is no joke. In an emergency, elevators are not an option. Pitch black stairwells? No thanks. Functional alarms and sprinkler systems? Doubtful.

This situation sounds very scary. It would be foolish to ignore the potential dangers.

I dunno if tweets embed on comments like pictures/Youtube videos, but this is fantastic either way:

Kitty -but are they being shot ,murdered, mugged .? The other stuff – we said all this about Dehli in 2010 .Been there done that . Stop whining lady.

That’s great for the professional stars, but what about the rest of the athletes? Delegations will need to be doing their own alternative planning (if they have not already done so) if the condidtion are not improved. Meanwhile, IOC, NOC and IF leaders will be comfortably housed in 5-star accomodations. I am suddenly glad that the my delegation did not get me housed in the village. That apartment I got across the street from the Barra Olympic Park is sounding better and better.

Moving forward, it is time for the IOC to seriously conside one or a few permanent locations (used on a rotating basis) for the Olympic Games and having all countries help toi pay for the upkeep of… Read more »

Rather than take the “chicken little” approach the USOC hired contractors last week to solve their issues prior to the US village arrivals. Also; great job AUS publishing your building number in your rant. Great security idea.

Good point- this could have been sorted without the public humiliation to Rio. Australia has hosted the Games recently, we should understand these logistical details.

We need to hold Olympic trials for some plumbers and electricians asap and get them to RIO to fix up the Teamusa building. I hope we at least send some of our own building inspectors to make sure its safe for our athletes to live their. Oh and dont forget the elevators I still remember the fatal accident from my year in the dorms at college.

Ugh! I’m starting to think the Rio Olympics is the worst Olympic games in history already and it hasn’t even STARTED yet: the poor citizens of Rio being driven out of their homes, doping out of control, water quality threatening to make athletes competing on/in water seriously ill, the zika virus, safety concerns for athletes and fans in the city streets, and now dangerous athlete housing? I can only pray ISIS doesn’t use this opportunity to attack innocent world citizens!

You took the words right out of mouth. More than anything, the IOC has proven themselves to be spineless cowards when forced to make a decision that will actually DO something positive for the athletes involved. I am disgusted with this Olympic Games and the never ending list of failures.

totally agree with u – i feel and sense this is gonna bring the Biggest Upset and chaotic organisation ever in any Olympics in History – Many athletes will be in shock when they will arrive – let alone know how to manage and deal with the Fiasco . I knew this months ago intuitively and feel deep pain the the citizens of Rio and the athletes . What an ugly Shame

1000 sub minimum wage cleaning employees roaming the village who all will be lucky if they even get paid on time. I’m sure they all passed rigorous background checks and are required to go through USA airport type screening before being allowed to step foot in the village.