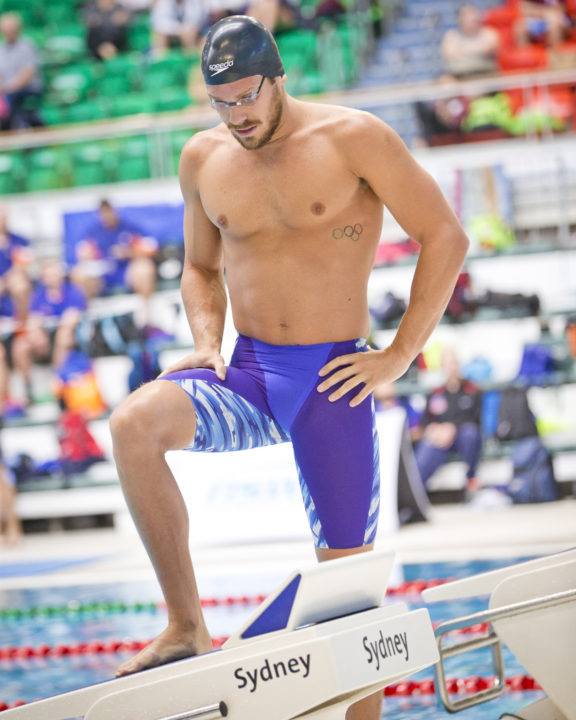 Australian two-time Olympian James Roberts has announced his decision to retire from competitive swimming at the age of 30. Archive photo via Nina Beilby (provided by Hanson Media)

Australian Olympian James Roberts has announced his retirement from competitive swimming at the age of 30. The Gold Coast native revealed his decision via Instagram today, December 31st.

“The time has come to announce my retirement from competitive swimming✌️ I’d like to thank a special few that had a significant impact during my career,” begins his social media post, which you can read in full at the end of this post.

The Gold Coast native continues to thank former coaches, competitors and friends who impacted his lengthy career, which began at the age-group level and culminated with two Olympic appearances.

But, it was prior to London where the ace put up a personal best in the 100m free, a mark which he would never wind up breaking. He clocked a PB of 47.63 at the 2012 Australian Olympic Trials, a swim which ranked him 2nd in the world at the time, although well behind leader and fellow Aussie James Magnussen.

Since that golden era, Roberts had been plagued with injuries, ultimately undergoing shoulder surgery in 2014 and 2015, which rendered him a total of 8 months out of the water. He was also officially diagnosed with ankylosing spondylitis, a form of arthritis in November of 2017, although he already knew he carried the gene present in most people with the disease.

As such, Roberts having earned a gold medal at the 2018 Commonwealth Games on the Gold Coast as a prelims member of the men’s 400m free relay was considered a personal triumph in his debut at that quadrennial competition.

“To Hugh Simson, my first coach. I was a young SLS competitor with ‘an ugly surf stroke’. Your knowledge with swimming technique and training methods helped mould me into the swimmer I am. You helped me qualify for my first Age Nationals and win an Age National Title just 2 years later. I honestly wouldn’t have lasted in the sport without your guidance.

To @john.fowlie1 who turned me from an Age Group swimmer to an Olympic Swimmer. Moving from the GC to the @theais_ in Canberra at 19 was tough but it was the best decision I’ve made in my life. You pushed me harder than I ever thought was possible. You changed my mindset on swimming and uncovered a burning desire to see what I was truly capable of. For everything you had done over those 5 years I am eternally grateful.

To my physiotherapists, @holtkylie and Brit @mygcphysio for getting me through 3 shoulder reconstructions and ongoing niggles from a later diagnosed auto immune disease and back to swimming my best. I never thought I could bounce back from these injuries, and I have you to thank for this.

To @deb_sav YOU ARE AN INCREDIBLE HUMAN BEING. I have never met a coach who goes above and beyond more than you. Your passion, enthusiasm, optimism and generosity truly inspire me to be a better person. You’ve been there through so many ups and downs and never stopped believing in me. I will be forever grateful for all you’ve done.

To @ashcallus you started off as an intimidating training partner and without your mentorship over the past 11 years, I believe my story would be very different. I thank you for the past 6 years as my coach. You helped me return to my 2nd fastest 100m Free time after 2 shoulder reconstructions and 9 months out of the water to make my second Olympic Swimming Team and to break 22 seconds for the for the first time. You are a legend of the sport and a great coach.

Finally, to all my amazing family and friends. I am so grateful to have such amazing people in life. Here’s to the next chapter and an amazing 2022! 🙏”

The aussies have produced a number of great freestylers who unfortunately got plagued by injuries, Magnussen, Sullivan, Roberts, and now Chalmers. Even Thorpe was forced to end his career and can’t even swim more than like a 50 now because his shoulder might give out.

I don’t think it it would be just the Aussies “plagued by injuries”. Swimming is a brutal sport and to be at the pinnacle of this sport (like those you have mentioned) truely pushes the boundaries of human biomechanics which like any “mechanics” at the edge of their capacities can lead to breakdowns, just part of the journey in my opinion (certainly not the best part of the journey 😉).

I wouldn’t call three shoulder reconstructions “part of the journey”.

Teeny lil edit – Australia got a bronze in the 400m free relay in Rio, I believe.