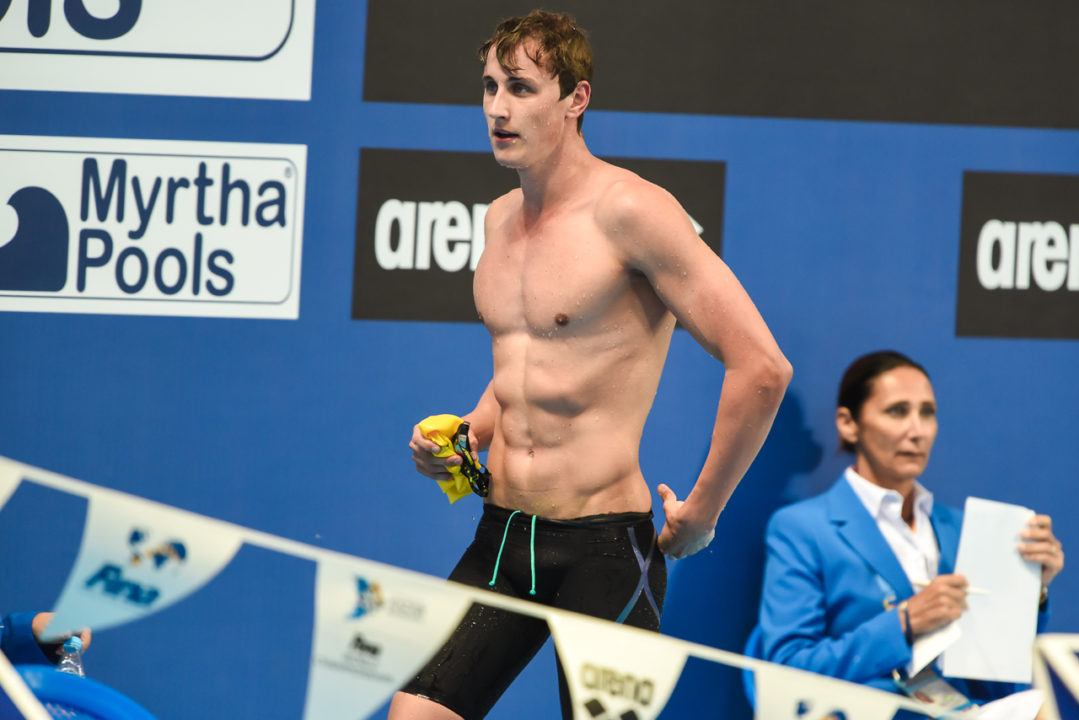 The fastest 100m freestyler ever in a textile suit, Cameron McEvoy of Australia, has competed in his first meet since switching up training homes.

As announced last month, 24-year-old McEvoy made the decision to leave Bond University and longtime coach Richard Scarce in search of a career reboot leading up to the 2020 Olympic Games. After trialing at Griffith University and Brisbane Grammar, McEvoy decided to move to TSS Aquatics under elite coach Chris Nesbit.

Overall the results were on the sluggish side across the board, with McEvoy winning the men’s 100m freestyle in a time of 51.11. That’s more than 4 seconds away from his 47.04 textile world record, as well as a good distance off even the pedestrian (by his historical standards) 48.44 he clocked on the Gold Coast to place 4th in the event at the 2018 Commonwealth Games.

Most elite Australians are gearing up for this year’s Australian Short Course Championships which take place October 25th-27th in Melbourne.

I wish an Aussie would come to America to train, that would be great. Maybe the Aussie public would consider that high treason, though, LOL.

How about why doesn’t an American go to Australia to train?

For men? Currently doesn’t seem to be the best course of action.

Aussies have in the past (Targett, Hawke) but I think the NCAA amateurism stops them for two reasons:

1) Because of swimming’s higher profile, turning pro is a more lucrative option in Aus. A British or Canadian swimmer (probably the best true comparisons, as swimmers from other big swimming countries need to be both world class swimmers and have learnt fluent English) might pass up a $50k suit deal to swim NCAA, an Aussie would probably be losing twice that.

2) Aussies seem to peak earlier. Thorpe was 15 when he won World Champs and only 22 at his last Olympics, Hackett 16 when he broke through, C1 16 when she won Olympic bronze, McEvoy 19 when he won… Read more »

In the period from just after WW2 through to the early 80’s, there actually was quite a stream of prominent AUS swimmers who took the US collegiate route. Since then, it has slowed to a trickle with the likes of Hawke (90s) & Targett (00s) being the last prominent exceptions with most AUS now taking that route NOT being major contenders for senior natl team honours.

What brought this about ? Firstly the change from strict amateurism in AUS and the development of major supporting infrastructure at home. Secondly, for those actually pursueing serious academics as well as swimming; there is the decision as to whether they are better off academically as well as swimming by taking the collegiate route… Read more »

Mark Stockwell was a florida gator and won olympic silver in the 100 free.

One of the reasons I didn’t go to the US was because there is no undergrad option for Law and many other degrees like there is in Aus.

meg bailey is there now. I am not sure it’s a path most elite swimmers feel the need the take

I think you will see a lot more Aussies in NCAA swimming in future. Katie Ledecky and even basketball players like Ben Simmons have increased the profile enormously. If 10s or potentially 100s of our basketball players can make the journey why not the swimmers?
However it isn’t really clear what events are open in the US for international age-groupers to compete in. Maybe Swimswam or some people on here could recommend some events for the top Aussie age-groupers to attend and get some yard times.

He should train with the Campbell sisters in Sydney .. his times atm are barely faster than Cate’s pb.. would make for a great sparring partner for her

Given that he didn’t consider Cusack when he was trialing coaches, I don’t think he wants to move to Sydney. I just hope his 100 free doesn’t go the way of larkin’s 200 back.

Very strange move for McEvoy to join TSS. Nesbit is a great coach, but not sure he’s much experience in senior male sprinting.
And 51.11, Some heavy training!