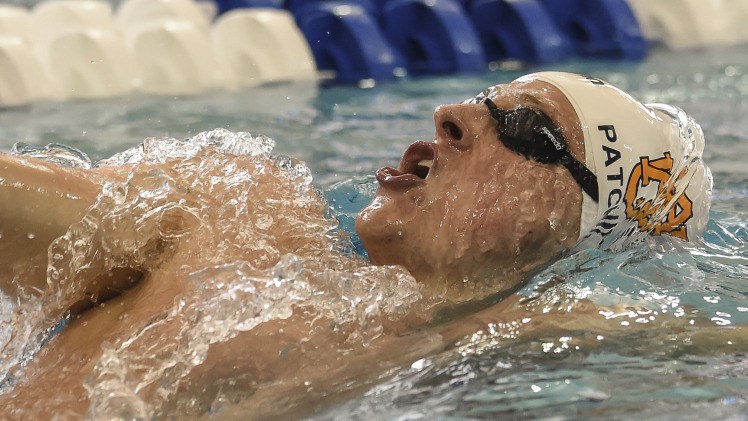 On the men's side, SEC champ Joe Patching won all 3 of his individual events for the second meet in a row. Archive photo via Wade Rackley/Auburn Athletics

The Auburn men and women brought their season records to 2-0 tonight, winning their first SEC dual meet of the season against the Kentucky Wildcats. For the Tiger freshmen, the meet marked the first home dual meet of their careers.

One of those freshmen was Julie Meynen, who picked up 2 victories for the women in the sprint free events. First, Meynen powered to victory in the 50 free with her 23.00. She then posted the only sub-50 time in the 100 free, winning it in 49.52.

While Meynen represented for the newcomers, seniors Natasha Lloyd and Ashley Neidigh were also showing their skills. Lloyd, a breaststroke specialist, clocked a 1:02.21 in the 100 breast and a 2:15.23 in the 200 breast to win both races. Neidigh swept the middle distance freestyles at this meet, swimming to a 1:49.52 in the 200 free and a 4:49.48 in the 500 free.

Kentucky’s NCAA champ Danielle Galyer came up with a victory for the Wildcats in the 100 back, clocking a 54.53. She wasn’t the only Galyer to win a backstroke race at this meet, as her younger sister Ali Galyer touched 1st in the 200 back with a 1:57.66.

AUBURN, Ala. — Freshman Julie Meynen picked up four victories in her first home meet, and seniors Joe Patching and Michael Duderstadt earned three wins each to lead the Auburn swimming & diving team to a sweep of Kentucky Wednesday afternoon.

“There was definitely some good stuff out there,” Auburn head coach Brett Hawke said. “It was a midweek meet, so we didn’t know what to expect. We haven’t really adjusted the training for this meet, so everyone swam pretty tired. I was happy with the team spirit and the way they stuck together throughout the meet.”

Meynen made the most of her home debut, leading Auburn sweeps in the 50 freestyle (23.00) and 100 freestyle (49.52). She was also part of two winning relays, swimming the anchor leg on the 400 medley relay (3:40.95) that included Aly Tetzloff, Natasha Lloyd and Bailey Nero. Meynen took the second leg on the 200 freestyle relay that won in 1:32.84, swimming alongside Ashton Ellzey, Tetzloff and Robyn Clevenger.

“Julie Meynen had an exceptional meet,” Hawke said. “It was nice to see the freshmen race. One of the most important things for us is to see how the freshmen respond under training conditions, then performing under race conditions.”

“I thought it was a pretty good meet for us,” Auburn associate head coach Sergio Lopez said. “I don’t really know our team 100 percent yet, so I didn’t know what to expect. I really like the way we’re racing, but we still have a lot of work to do on details. I like the way the team embraces one another. Things will get tougher as the season goes on, but I’m excited about what this team can do.”

Auburn’s other victory came in the diving well with Scott Lazeroff claiming victory in the 3-meter event with a score of 375.68; Pete Turnham picked up second-place points for Auburn with a 351.53. Lazeroff also took second place in the 1-meter event with a 316.50. In women’s diving, freshman Alison Maillard was the runner-up on both boards, scoring 279.00 on the 3-meter and 269.03 on the 1-meter.

The Tigers return to action Friday, Oct. 28, with another SEC meet at LSU. Auburn’s next home meet is Friday, Nov. 4, as the Tigers host Alabama at 1 p.m.

AUBURN, Ala. – The Kentucky swimming and diving teams opened up their seasons Wednesday afternoon, suffering losses on both sides to Southeastern Conference opponent Auburn. The women’s team fell 178.5-121.5, and the men 173-127.

“Overall, both teams performed pretty well,” said head coach Lars Jorgensen. “We were disappointed to come away with losses, but it was a good competition.”

The men saw victories in six individual events in the afternoon’s meet. Senior Kyle Higgins was the only UK swimmer to come away with multiple victories from the day, sweeping both butterfly events on the men’s side. Higgins’ time of 1:45.37 in the 200 fly surpasses the NCAA B standard in the event, while his 48.29 mark in the 100 fly is just eleven-hundredths of a second from NCAA consideration.

“I was really excited with how I swam today,” said Higgins. “It was my fastest in-season time for my college career, so I’m really excited for the season.”

Depth in the freestyle distance events emerged as a strength for the men’s squad as the trio of Jarod Kehl, Andrew Aviotti and Isaac Jones swept the 500 and 1000-yard freestyle races. Jarod Kehl’s time of 4:29.04 in the 500 was just five-hundredths shy of a B standard, with Aviotti and Jones following close behind. Aviotti had a first-place time of 9:13.56 in the 1000 for the Cats, with Jones and Kehl finishing second and third, respectively.

The women’s team was highlighted by springboard performances from senior diver Becca Hamperian, sweeping both the 1-meter and 3-meter events. Both her 3-meter score of 304.28 and her 1-meter score of 291.08 overwhelmed Auburn’s second-place finisher, Alison Maillard, by more than 20 points.

“I was just going into today trying to be confident and knowing that I’ve put good work in and that we’ve been working really hard at the beginning of the season,” explained Hamperian. “I just want to stay consistent with my dives and I think I did a pretty good job with that.”

The Wildcat women picked up four additional first-place finishes, along with seven NCAA B cuts on the day. The women saw great success in backstroke events, with Danielle Galyer and Bridgette Alexander going one and two in the 100. Freshman Ali Galyer turned in the top time of 1:57.66 in the 200 back as well, with Danielle and Alexander both touching in less than a second later to all meet the B standard in the event.

Freshmen Asia Seidt had a very strong showing in her first outing for the Wildcats. Seidt finished in the top two in three separate events. Her best performance came in the 200 individual medley, where her 2:01.59 first-place finish qualified for NCAA consideration. She also joined Galyer, Kendra Crew and Geena Freriks in the 400 medley relay team that picked up a second-place finish.

Crew also added strong performances for the Wildcats in the breaststroke events. The senior tied Auburn’s Natasha Lloyd for a first place finish in the 200-yard breaststroke, both touching in at 2:15.23 to secure B cuts in the event. Additionally, Crew’s second-place performance of 1:02.68 in the 100 breaststroke came in just short of the B cut time of 1:02.49 in the event.

The Blue and White will face a tough challenge as they head to Columbia, South Carolina, to face the Gamecocks on Thursday, just one day after being defeated by the Tigers.

According to Jorgensen, how quickly the team can recover will be a key component to the team’s success against South Carolina.

“It’s good for us to do this early in the season and see what we’re made of. I’m looking forward to it,” explained Jorgensen. “Dual meets always come down to those little things. We had some really good performances on both sides, but we’re going to try to get better.”

The Wildcats are slated for a noon start against the Gamecocks on Thursday.

The South Carolina men turned in a 19th-place finish at NCAAs and seventh at SECs last season. The women finished 29th and 11th, respectively. The Gamecocks return distance swimmer Akaram Mahmoud, who earned the title in the 1650 freestyle at SECs with a time of 14:35.49, and earned the silver at NCAAs in the same event, touching in at 14:31.66.

This will be the first outing of the season for the Gamecocks, as their first scheduled meet at the Florida Gulf Coast Invitational was canceled due to Hurricane Matthew.

These mid-week dual meets seem odd. Is Kentucky on fall break maybe? Also, a correction to Kentucky’s press release–the FGCU Invitational wasn’t cancelled due to the hurricane, South Carolina just did not attend.

Keep up the great work Isaac!

Result say 4:03 but he is missing a lap if you count them.