Auburn Sweeps Indiana At Home in Revenge of 2014 Loss 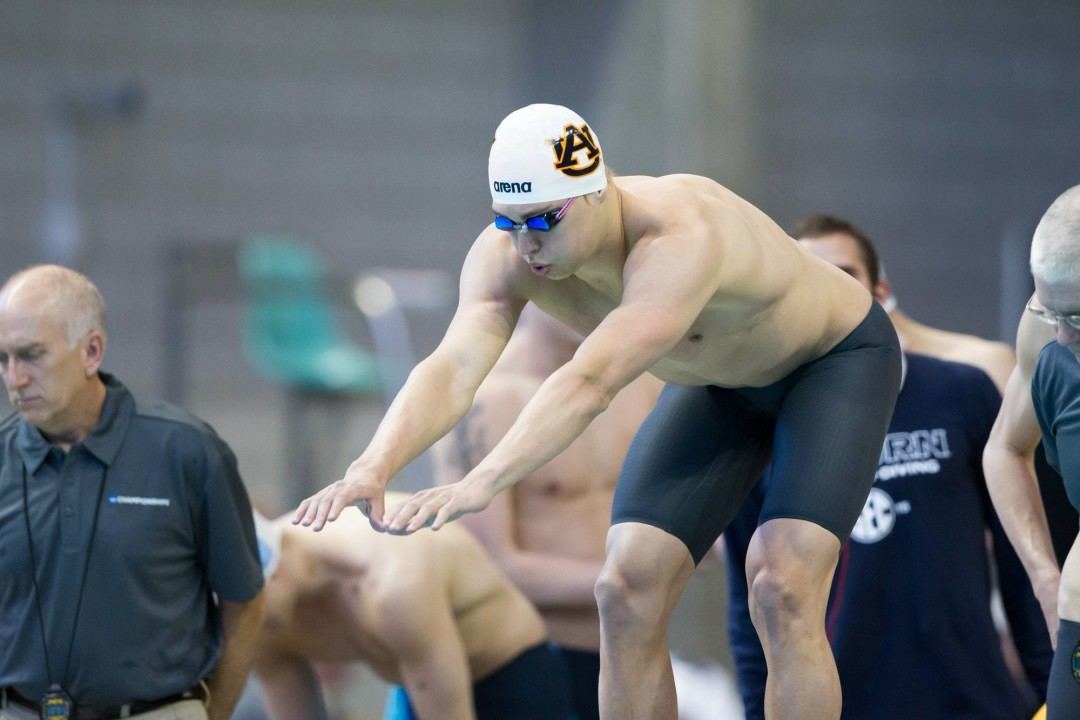 Michael Duderstadt (above) swam the second-fastest 100 breaststroke in the country this year by winning a big battle against Indiana's Tanner Kurz Archive photo via Tim Binning/TheSwimPictures.com

After succumbing to Indiana in 2014, the Auburn men’s team was able to rebound today with a 59 point victory. The final score was 184.5-115.5, and while that’s a significant margin, the results in individual races generated a much more competitive-seeming meet than that tally might indicate.

The Auburn men led off the meet with a win in the 200 medley relay. A strong fly leg by Arthur Mendes propelled them to victory, touching first over Indiana 1:27.24 to 1:27.52. In the 200 free, the momentum shifted, with Indiana’s Blake Pieroni and Anze Tavcar squeezing in a one-two punch over Auburn’s Mendes. Pieroni and Tavcar touched in 1:36.53 and 1:36.97, while Mendes, who competes internationally for Brazil, settled for third in 1:37.22. Pieroni, the fourth place finisher at last year’s NCAA championships, was only a half second off his season best of 1:35.91. He now holds three of the six fastest times in the event this season.

Pieroni also won the 100 free, once again going one-two with Tavcar, who tied for second with Kyle Darmody. Pieroni touched in 43.60 while both Tavcar and Darmody finished in 44.50. Pieroni’s time keeps him third in the nation this year, but just as in the 200, he currently holds three of the six fastest times.

In the 50, Indiana’s Ali Khalafalla picked up his only individual win of the night over Auburn’s Kyle Darmody. Khalafalla and Darmody both touched under 20 seconds, finishing in 19.70 and 19.94. Khalafalla’s respectable season best moves him up to third in the country this year.

Auburn’s Michael Duderstadt earned himself two individual victories in the breaststrokes, winning the 100 in 52.98 and the 200 in 1:57.83. In both events, he was followed closely by Tanner Kurz, who picked up a pair of second place finished with times of 53.53 and 1:58.88. Duderstadt and Kurz’s performances were not only season bests for the pair, but they now rank second and third nationally this year, trailing only Duke’s Peter Kropp.

Hugo Morris picked up a victory for the Tigers in the 200 fly, winning easily over Indiana’s Max Irwin. The two finished in 1:44.93 and 1:47.39. Morris is undefeated in this event so far this season and his stellar performance will move him up to number eight in the national rankings. Auburn’s Luis Martinez touched third in 1:47.99. Martinez went on to win the 100 fly over teammate Mendes, 47.95 to 48.22.

The Auburn men closed the meet with a four second win over Indiana in the 400 free relay. The team of Duderstadt, Darmody, Peter Holoda, and Mendes touched in 2:55.57 over Indiana’s 2:59.43.

The Auburn women wasted no time on the road to their victory, winning the 200 medley relay in a one-two finish over Indiana. The A team of Jillian Vitarius, Beatriz Travalon, Ashton Ellzey, and Allyx Purcell finished in 1:40.12 over the B team’s 1:42.70. Indiana’s A team finished in third with a time of 1:43.09.

Ashley Neidigh of Auburn kept things moving for the Tigers by winning the 1000 free comfortably over teammate Zoe Thatcher and Indiana’s Haley Lips. Neidigh’s 9:47.91 moves her up to 5th in the nation this year. However, Neidigh had to settle for third in the 500 (4:52.64), finishing behind her teammate Erin Falconer and Indiana’s Lips. Lips made a charge the last 50 but couldn’t overtake Falconer, who touched only .08 ahead. The pair were 4:51.36 and 4:51.44.

Indiana were able to regain a bit of momentum in the 200 free, with Kennedy Goss and Haley Lips touching first and second over Auburn’s Ashley Neidigh. Goss and Lips were 1:47.87 and 1:49.03 with Lips barely touching out Neidigh, who finished in 1:49.36. Goss is the returning Big Ten champion in the event and now holds two of the top five times in the conference this year.

In a nail biting finish, Auburn’s Jillian Vitarius and Indiana’s Marie Chamberlain tied for the 100 backstroke win, both finishing in 54.15. The race was exceptionally close throughout, with Vitarius touching a mere three hundredths of second ahead of Chamberlain at the 50. Auburn’s Caroline Baddock finished third in 55.69.

Vitarius, a junior, was also victorious in the 200 back, touching in 1:57.58 to win easily over Indiana’s Shelly Drozda and Marie Chamberlain. Vitarius, whose win was a season best time, placed 14th at NCAAs last year after narrowly missing the A final. Both Drozda and Chamberlain were under the two-minute barrier, touching in 1:58.92 and 1:59.24.

Indiana’s Gia Dalesandro gained a victory in the 200 fly, touching in 1:57.89. Her time was her fastest this season and puts her at eighth in the country and first in the Big Ten by over a second. Hot on her heels was Auburn freshman Bailey Nero, who finished in 1:58.28. Fellow tiger Alex Merritt was third in 2:00.31.

Dalesandro followed her win up with two consecutive victories in the 100 fly and 200 IM, touching first in times of 53.44 and 2:01.86. Both of Dalesandro’s times were season bests, with her 100 butterfly placing her 5th in the nation this year. Auburn’s Aly Tetzloff finished only .02 seconds behind Dalesandro in the 100 fly, while fellow tiger Alex Merritt placed third in 54.74. In the IM, Auburn’s McKenna Debever and Bailey Nero were second and third, touching in 2:03.19 and 2:03.29.

The Tigers ended on a strong note by winning the 400 free relay over Indiana. The team of Purcell, Ellzey, Tetzloff, and Falconer touched in 3:22.47 over Indiana’s 3:23.62, despite a strong split of 49.49 from Haley Lips.

Lacey Houser and Michal Bower of Indiana took first and second in the one-meter diving event, scoring 324.14 and 285.30 respectably. Houser’s career best score registers her as the eighth-best Hoosier of all time. Auburn’s Carly Scheper and Morgan Mullins responded in the three-meter event, putting up a one-two finish with scores of 285.08 and 283.80.

what a fantastic article!