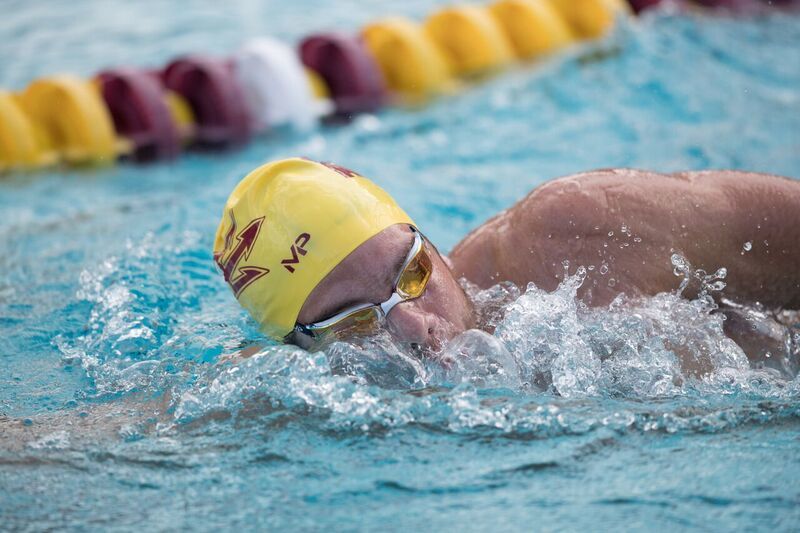 ASU won 27 of 32 events against Utah in their first dual of the season. Archive photo via “Rafael/Domeyko Photography”

Arizona State had its first dual meet of the season against Utah on Friday, October 27th. The Sun Devil men and women combined for 27 of 32 event wins in a meet that was much faster than when Utah and ASU met last year. In fact, the only events that weren’t faster than last year were the women’s 50 free and 400 free relay. Last year’s meet was at Utah, so the higher altitude and more shallow pool probably make up for at least a good portion of the difference, but both programs are building and regardless of the pool difference it’s still very interesting to compare the times.

The full results from last year can be viewed here.

TEMPE, Ariz. – Utah swimming and diving won five events against Arizona State but dropped a Pac-12 dual meet against the Sun Devils this evening at the Mona Plummer Aquatic Center. The No. 22 men’s team was defeated by the No. 8 Sun Devils, 197-103 while the Utah women fell 207.5-92.5.

The Utes started the meet with the women’s 200 medley relay team taking first place. Sarah Lott, Genevieve, Gillian St. John and Dorien Butter touched in at 1:42.75 and was closely followed by the quartet of Emma Broome, Mariah Gassaway, Darby Wayner and Kenzie Ford (1:44.16).

The next wins of the night came in the women’s 100 back and men’s 100 back, with Sarah Lott and Paul Ungur taking first place in the events. Lott clocked in with a time of 55.12, while Ungur, coming off a strong performance at the USA College Challenge, finished with a final time of 46.59.

Ungur capped his evening with another win, this one in the 100 fly with a final time of 47.89.

The Utes will return to action tomorrow against Arizona, with the meet at the Hillenbrand Aquatic Center in Tucson. The action begins at noon against the Wildcats.

“It’s good to be back in competition; I think that just changes their mindset,” said head swim coach Bob Bowman. “We’ve been training for two months now without any real meets, so this will start to sharpen them up, particularly on some of the details. It sets us up well for what’s coming next. Hopefully tomorrow we can come back and have another good day.”

The Sun Devils won 27 of 32 events on the day, including three of four relays. In the final event of the night, the 400 free relay, the Devils’ A-team (Patrick Park, Zach Poti, Evan Carlson, Cameron Craig) found themselves behind, but Craig’s speedy anchor leg secured the event victory for ASU.

In the first individual event, the women’s 100 free – ASU finished in order at the top of the leaderboard, with freshman Caitlyn Wilson grabbing the top spot. Fellow newcomers Emma Nordin and Cameron Smith finished 2-3 with Bentley Hulshof just behind in fourth.

Newcomers proved to be difference makers, as Erica Laning (200 free), Evan Carlson (50 free) and Fanny Teijonsalo(100 fly) won their first events as Sun Devils. Notably, Zach Poti won the 200 back by an impressive four full seconds while Ben Olszewski won three different events, the 500 and 1000 free and the 400 IM.

ASU has a quick turnaround, hosting No. 20/23 Florida State on Saturday morning starting at 11 a.m. The meet is, once again, free to the public. The diving teams will compete in springboards as well as the platform dive, which is often not seen during the regular season.

The Women’s 500 free and 100fly have the mens times imported.

That explains a lot. I wondered why the times were so far off.

They might want to check the times uploaded to college swimming and listed on their web page as results, as it looks like they imported the mens times into many of the women events.