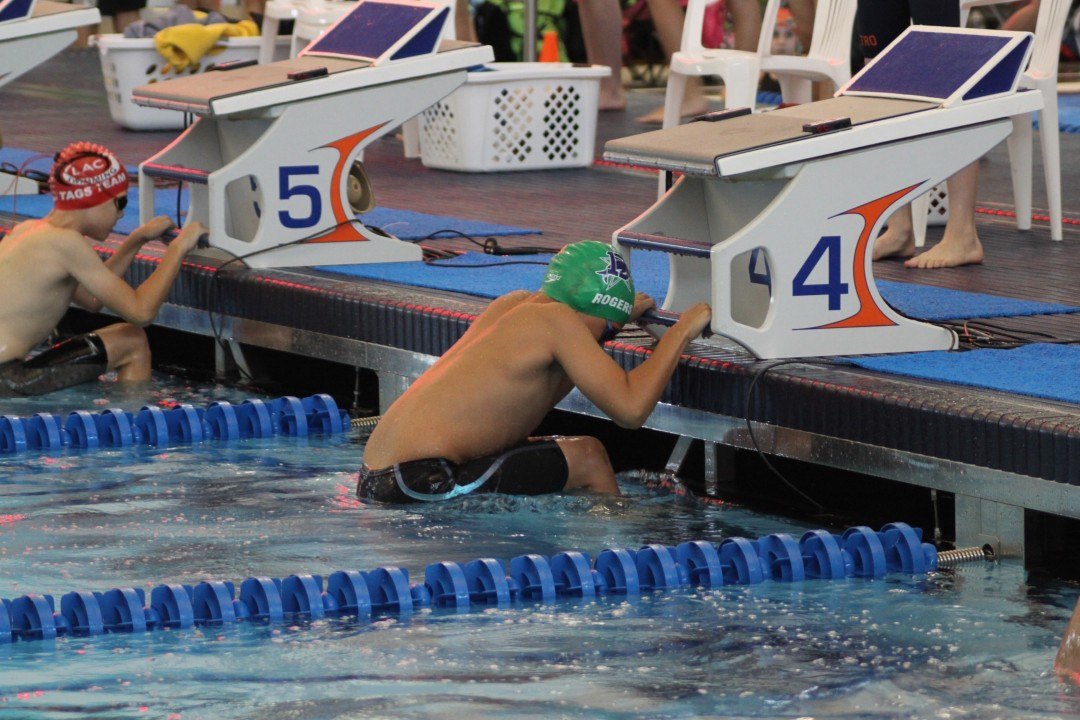 The Arkansas Swimming House of Delegates recently voted to ban technical suits, with some exceptions, for all swimmers age 12 & under at meets hosted within the LSC's borders. Current photo via Andy Ringgold/Aringo Photography

The Arkansas Swimming LSC has chosen to follow the lead of Southern California Swimming, putting restrictions on technical suits for swimmers age 12 and under.  The ruling by the ASI House of Delegates will allow for only a few exceptions, with the wording of the rule proposed to be the following:

“ASI will not allow technical suits to be worn by any athletes age 12 and younger in ASI sanctioned meets.  The only exception being during the finals of a prelim/finals meet, or if the meet is Sectional level or higher.”

The rationale for the proposal was presented as a concern over cost, citing that the rule, if passed, “relieves the burden on families who feel obligated to spend money on high dollar suits to be competitive.”

A poll in January showed that 56.2% of SwimSwam readers would support an age-based tech suit ban, with comments on the article reflecting several opinions from readers supporting both sides of the argument. In Arkansas the motion passed, but not unanimously as there were three in attendance who voted against the decision once discussion was finished.

In the meeting, when the question arose about which suits would be banned, the list made by Southern California was shared and it was agreed that this list would be used at this time.  Discussion on the topic centered mostly around the fear of any unforeseen repercussions the decision might carry.  This included the possibilities of parent push-back, the fear of over-stepping into “micro-management” of family decisions regarding purchases, and the fear that teams in other LSC’s might avoid attending Arkansas meets due to the ban.  There was also concern that it might be difficult for officials to police a swimsuit ban, but the Officials’ Chair for the LSC reassured the group that this should not be a concern as it would be easy to spot younger swimmers in banned suits.

The ban will be effective at all meets hosted in the Arkansas LSC beginning on September 1, 2017.

This is a complete top/down overreach. I don’t have a 12/under kid so I have no dog in the fight. But this is a persobal decision. The club and family should be able to decide what their kid wears if the suit is LEGAL. Where does the nanny state stop? I actually think these bans create more of an unfair playing field. A 12 year is banned from wearing a legal tech suit, but a 13 year old is not??

Why are these LSC’s spending so much time on this. These suits aren’t magic nor do they replace good technique and practice.
They are skating on thin ice. I could see these ridiculous decisions to ban legal suits being challenged.

Where is in the USA rule book does it empower an LSC to make this rule? Answer it doesnt…..

I agree. I think it will rightfully be challenged. I don’t see how they can ban a legal FINA APPROVED suit.

Over reaching! Creating unfair advantages when competing for zone meets!

Our Virginia Age Group coach makes this policy. I was against it at first, but then my kid swam the lights out that whole first season with the team and made Zones for the first time ever…all in a standard Arena one piece team suit.

Lesson learned? It’s her, not the suit.

This is the stupidest rule I have ever heard of. It doesn’t make sense- if you can afford he suit, you should be able to buy it. Hope Ozark doesn’t start this…

Tech suits are irrelevant if the technique is not there. IF an age group swimmer has perfect technique, appropriate conditioning and speed, they will be competing at the elite level and would be exempt from this ban.

Swim parents would be better off spending the hundreds of dollars on private coaching rather than a suit that does not improve technique. Improving the swimmers’ technique will shave seconds. A tech suit in a poor swimmer does nothing.

Everyone on Swimswam seems to think techsuits are some magic device that lets you drop ten seconds on any event.

Your last paragraph illustrates why the ban is a poor idea, and why it is unclear (maybe even to them) what problem this LSC board is trying to solve. If it really is an expense issue, as they say, wouldn’t they have to ban private lessons as well? Obviously, there is an affordability issue with private lessons for some families. Going down this path sets a precedent that can lead to a lot of ill-conceived legislation, enacted arbitrarily by people who are ill-equipped to create and enforce new rules of this type.

What’s the lesson they’re trying to give kids? You can’t swim good without a special suit

We bought our son a mid-range tech suit when he was 12 and heading into championship meets at the end of the season. We bought it on sale, and he felt awesome in it. To me it was money well-spent. However, I did sit in the stands feeling like it was unfair for him to have one when I know not every parent can afford the price tag on a suit that’s good for only 5 swims. Regardless of whether it provided a physical advantage to him or not, it felt a little like a status symbol to me, and a little uncomfortable, and so I understand the thought behind the ban… and I would have no problem if the… Read more »