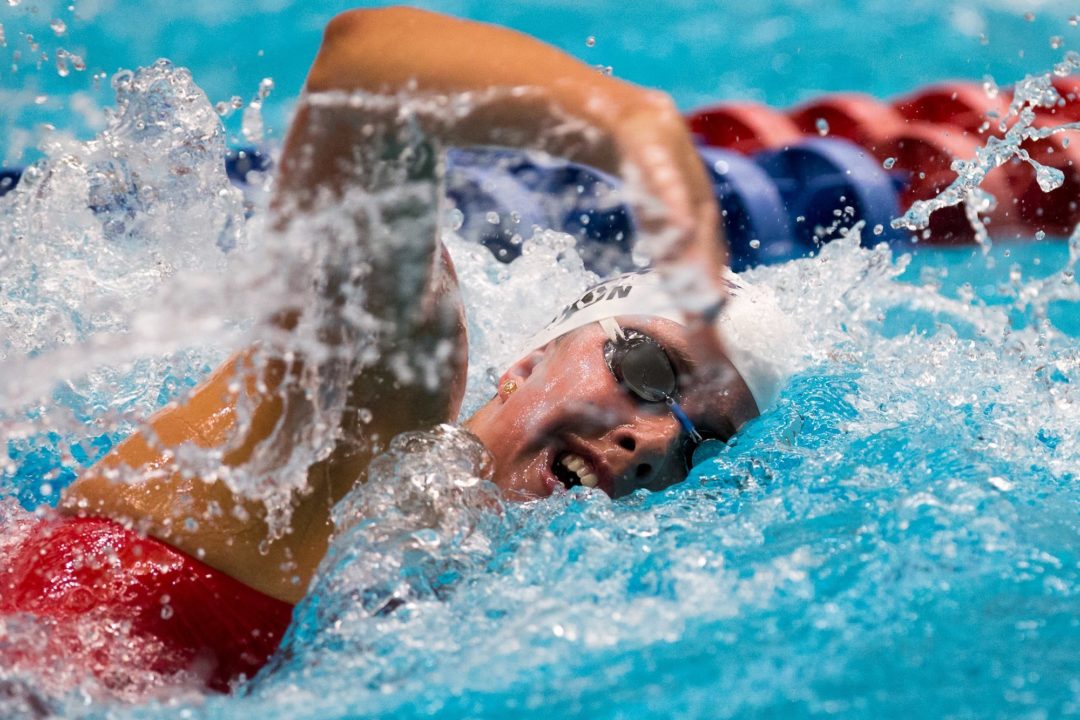 Bonnie Brandon had the fastest split in the women's 800 free relay, as her Arizona Wildcats took the win in 7:01.50 over Texas and USC.

The 2015 Texas Invite has begun, with both the women’s and men’s 800 yard freestyle relays being the only event of the night. The meet will have prelims/finals sessions Thursday, Friday and Saturday. This will be a very fast meet, with some of the top teams in the country competing including Texas, USC, Arizona and Wisconsin. Prelims will be at 9 AM and finals at 6 PM CT (10 AM, 7 PM EST).

Despite the disqualification to Texas and USC, we saw some fast splits from them. Jack Conger led off in 1:34.20 for Texas, ranking him 4th in the country. Townley Haas had the fastest split of anyone in 1:33.14, and Joseph Schooling was 1:35.42. Jonathan Roberts split 1:34.19 swimming third, but jumped early. USC was pretty underwhelming even before they were disqualified, other than Reed Malone who had a decent leg swimming 3rd splitting 1:34.73. Jonathan Knox jumped early for USC swimming the 2nd leg.

Safe to assume that the Longhorns will have a legitimate shot at going under 6:10 in this come March.

Can anyone confirm my intuition that Texas is have shaved/full tapered, and half just rested? Seems to me that Conger and Schooling didn’t have their full edge last night.

6:16 six seconds faster than the official winner. Better to happen now instead of nationals!

Wonder why this was scheduled the same weekend as nationals.

Schools are limited with when they can schedule invites due to exams and the Thanksgiving holiday. Invites either had to be the weekend of November 21st and 22nd (which some coaches might consider to be too early), or this weekend. Exams for some schools, including Texas, start next week and last weekend was part of the Thanksgiving holiday. Having a meet that weekend would have required travel on Thanksgiving. While college basketball expects it’s athletes to give up their Thanksgiving to compete, luckily college swimming does not (yet at least).

Also consider colleges need yard cuts and Nats is LCM, but there was not always a US Nationals this time of year. Maybe a US Open, but this was added later.

You mean you missed the prime time broadcast on ESPN?

0
0
Reply
The other hulk

No live video from the meet?

Wow I know UT got disqualified but Townley Haas was smokin’.