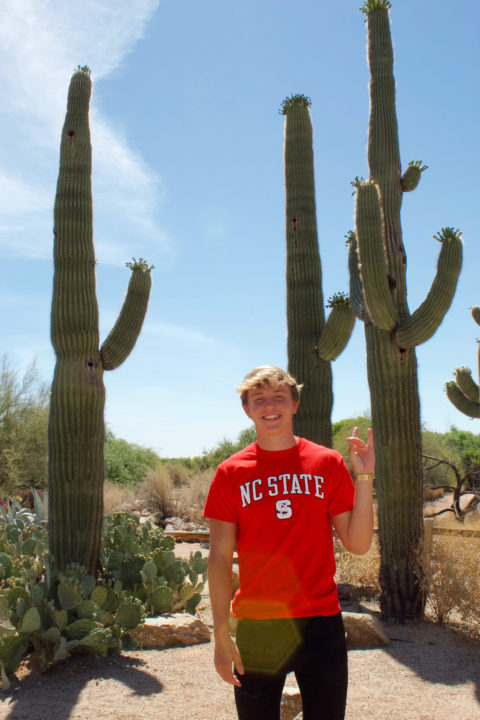 Nathan Kempiak, above, is NC State's 3rd 55-second breaststroker in the incoming class of 2021.

Arizona high school state champion Nathan Kempiak has verbally committed to North Carolina State University. Kempiak is finishing his high school junior year and is scheduled to arrive in the fall of 2021.

I am so blessed and exited to announce my verbal commitment to NC State’s swim and academic programs! I have to thank God and all of my coaches, family, and teammates who helped me get to where I am today! Going from the best to the best. Truly exited to crush future goals with an incredible program. Let’s go Pack! See you fall of 2021♦️

In the 2019-2020 season, Kempiak, who swims for Gilbert Christian High School, won the Arizona Division 3 State Championship in the 100-yard breaststroke. Division 3 has generally the state’s smallest high schools.

He won that race in 58.35, and in February, at the Arizona Senior Open Championships, he won the club state title in 55.75. That makes him the 2nd-best high school breaststroker in the state this season (behind Penn commit Matthew Leblanc), and the best in the class out of the state.

Kempiak joins an absolutely-loaded NC State recruiting class of 2021. The program’s other 5 announced men’s recruits in the class so far are all ranked in the top 20 in the class. That includes #1 Aiden Hayes, #12 Arsenio Bustos, #11 David Curtiss, #18 Garrett Boone, and #7 Sam Hoover.

That class has 2 other 55-second breaststrokers – Bustos (55.16/1:59.37) and Sam Hoover (55.05/2:00.74). The breaststroke aren’t events where NC State has had as much success as they have in other events recently. In fact, NC State’s most recent breaststroking All-American was Duncan Goodhew, who won a total of 6 individual All-America awards between 1976 and 1979.

A team only needs one breaststroker but he needs to be a real good one.

What is it with NC State and their Class of 2021 recruits?

NC State will win a medley relay while these kids are in college. No longer only a free relay school.

Pack doesn’t exactly have a strong rep for developing breaststrokers…

Sophie Hansson is legit, though.

I agree but 3/8 relays at last years NCAA championships didn’t have a swimmer go under 52 in breaststroke.

I think this is Partially true- more of an issue for a recruit is that they don’t tend to take many breaststrokers to ACCs.

Sure. But why would you take more breaststrokers if you can score in other areas? In contrast, they had 5 entries on the women 100 breast… that’s plenty.

Sorry Jim, no all americans for a top 5 team this century screams lack of development.

Derek Hren went 52.27 to win the ACC championships in 2016. If he was able to match that time at NCAA’s he would have A-finaled.