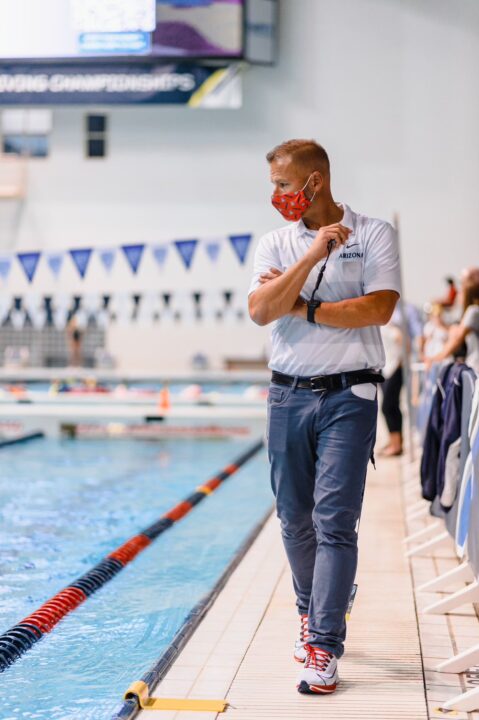 After three years at the University of Arizona, associate coach Peter Richardson is leaving to join USC’s coaching staff under Lea Maurer.

“We are so excited to have Pete joining us here in Troy,” said Maurer, who officially became head coach of the men’s and women’s teams in April after overseeing both programs with an interim title in the fall. “We are impressed with his knowledge of the sport and his drive to work with our staff to return USC to its rightful place at the top of collegiate swimming. What I think our athletes are going to like most, though, is Pete’s enthusiasm and sincere interest in the individual person. He cares about his athletes which will go a long way to building the trust that underlies successful athlete-coach relationships. We can’t wait to get started!”

It wasn’t an easy decision for Richardson and his family of six, who enjoyed their time in Arizona. But a talk with Wildcats volunteer assistant Matt Grevers, who swam for Maurer at Lake Forest (Ill.) High before going on to win four Olympic gold medals, helped make the choice clearer.

“Matt swam for Lea back in the day and said at one point, ‘I would’ve stopped swimming if it wasn’t for Lea Maurer,’” Richardson said. “Conversations like that are why I’m now a USC Trojan. Fight on!”

The move marks a return to California for Richardson, who previously spent eight seasons at University of Pacific and six seasons at Fresno Pacific University.

“Los Angeles has unlimited potential – I’m excited to be back in my home state close to family and friends,” he said. “But even more, the energy inside the USC athletic department is what I’m most excited about.”

In particular, Richardson is looking forward to being a part of another co-ed staff working with both programs. He also arrives at USC with new lessons learned from Arizona head coach Augie Busch.

“The amount of knowledge on deck everyday was invigorating,” Richardson said. “Everyday on deck we had five full time coaches and two amazing volunteers, the level of specificity we could get to helped our athletes reach their potential. Augie Busch set the tone for the whole program but really empowered me to take the distance group and run. I learned many things from Augie but the most important thing I learned was giving athletes the space to own their own journey.”

At University of Pacific, where he also swam collegiately, Richardson worked primarily with sprinters before focusing on distance swimmers at Arizona. He says he can fit in as a coach with any group.

“As Coach Lea rounds out the staff, I have no doubt I’ll be in the best position to take the Trojans to new levels of excellence,” Richardson said. “In our many conversations, her main focus was finding a coach who can fit in with the culture she is establishing – focused on hard work, positivity and relationships.”

Ok, so the faster growing Inland doesn’t have the college programs or OC doesn’t either have college programs but OC now has 3 cities over 300,000 and can built this as a tri–city concept like Minneapolis/St Paul is 2 city metro concept. LA just has Long Beach besides big old LA and lots of burbs. In fact Irvine as mention before is building some sports complexes that use to be mainly in LA like a crochet stadium. Also, it would help the OC take away some jobs from LA County if they billed the three cities as a combination, Anaheim, Santa Ana, and Irvine. In fact in Baseball Long Beach is going after the Angels when the deal fell through… Read more »

Yes, I’ve heard from some folks that Irvine has submitted their bid to host the textile Olympics in 2026 at the new crochet stadium.

Richardson’s specialty looks to be distance based on the recent performance of the Arizona swimmers. What’s Richardson’s reputation as a recruiter? Right now it’s close to crickets on Class of ’23 swimmers committing to USC so that means more reliance on internationals.

Coach Peter is a fantastic recruiter IMO. He is upfront and honest. Connects with swimmers and their families. As a former club coach, he is one of my favorite coaches out there. In Coach Peter’s last years at UOP, he put a great team together at the MPSF level.

Hmmm handed the keys to the car? Brooks performed with every coach at Arizona and Leah Smith missed the Olympics and left. No other performers in his group, however no performers at Arizona in this regime. Hard to blame Peter for Arizona recruiting, but they have put together 5 of the worst classes in program history. Is that what he learned from busch lite? Peter is a great guy and deserves to get out of the mess in Arizona.

Great for him. Rough for zona. One less good coach on deck for them.