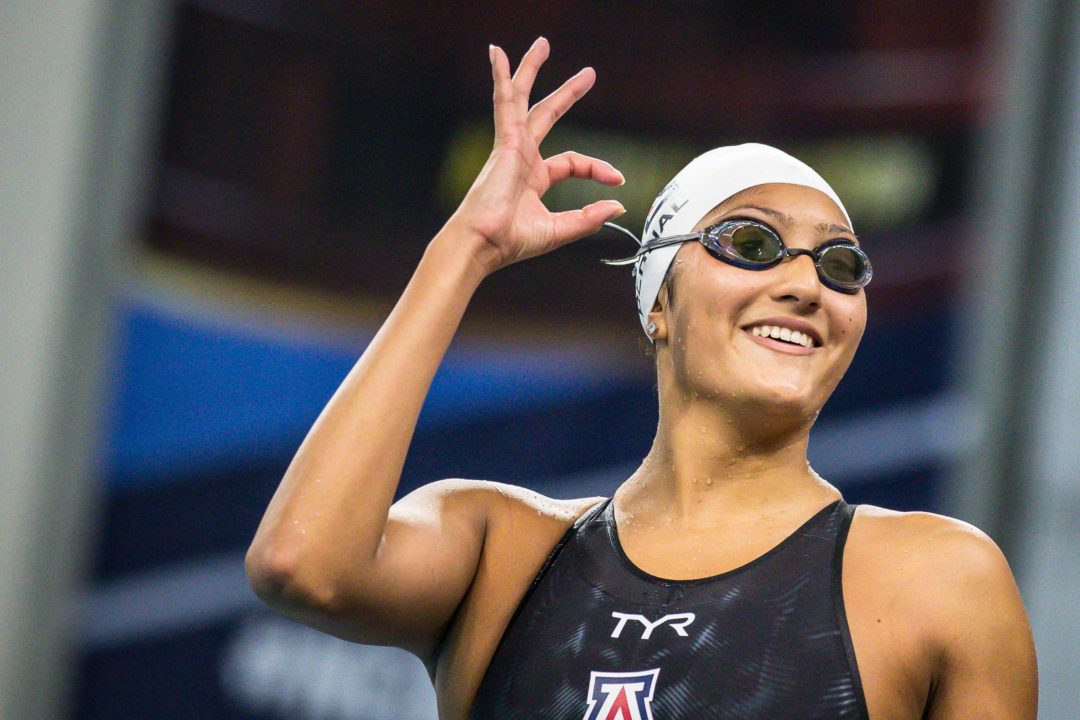 Northern Arizona vs. Arizona (Women Only)

The University of Arizona hosted in-state foe Northern Arizona for a two-day dual meet in Tucson this weekend. No events were scored and all swimmers for both teams competed as exhibition.

Leading the way for the Wildcats was junior Aria Bernal, who swept the backstroke races. The Houston, Texas native first won the 200 back on Friday in 2:04.41, ahead of teammate Erin Lang. On Saturday, Bernal returned to win the 100 back in 57.07, an event where she was named a CSCAA All American in 2020. Both swims were well off her season bests, which clock in at 51.59 in the 100 and 1:54.52 from last month’s Minnesota Invitational.

Also winning two events for the Wildcats was sophomore Julia Heimstead, who swept the butterfly races. Heimstead, who hails from Bloomington, Illinois, easily won the 100 fly as Arizona’s only entrant in the event, posting a 54.76 to win by over a second and a half. On Saturday she dominated the longer fly race, winning by almost 6 seconds to win with a 2:00.61. Heimstead has made huge strides in her sophomore year in Tucson, posting massive lifetime bests in both fly events at the Minnesota Invite. She swam a 1:55.64, a nearly 3-second best that makes her a scoring threat at NCAAs, and 52.69 in the 100, a half second lifetime best.

Freshman distance swimmer Casey Craffey produced NAU’s first win of the meet touching first in the 1000 free on Friday in 10:24.23. The Mesa, Arizona native followed up her performance with a third place finish in the 500 free on Saturday, touching in 5:07.72. Craffey’s season and lifetime bests in both events came at the A3 Performance Invitation in November, where she swam a 4:51.83 in the 500 and 10:01.78 in the 1000.

Also impressing for the Lumberjacks was junior breaststroke Haley Mayhew, who was returning to her hometown of Tucson for the meet. Mayhew finished first in the 100 200 breast on Friday in 2:22.20 and finished in third in the 100 breast and 200 IM with 1:07.46 and 2:12.24, respectively. Last season, Mayhew was a WAC A finalist in the 200 IM and 200 breast while also winning the B final in the 100 breast.

Arizona returns to action on Saturday when they welcome Pac 12 rival Utah to Tucson, while NAU will travel to St. George, Utah to take on Dixie State on Saturday.

Stella Copeland is an Arizona swimmer