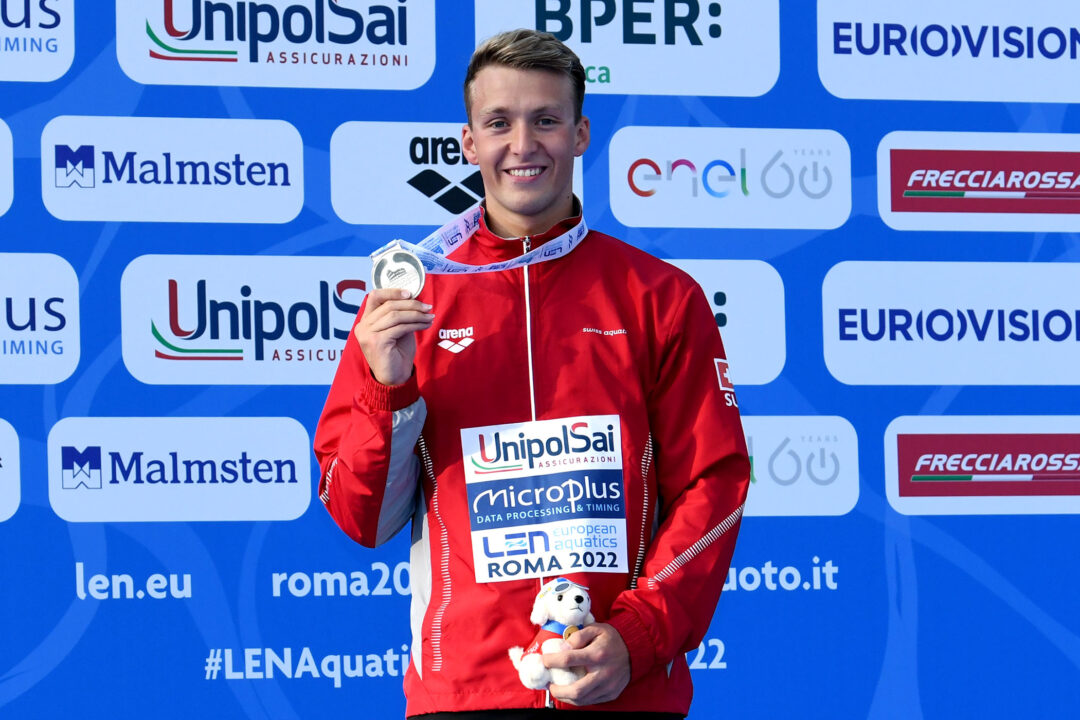 One of the swims that flew under the radar at Euros was Djakovic's 400 free, where he dropped nearly two seconds for silver in a time of 3:43.93. Current photo via Fabio Cetti

Many big-time performances from the recently-concluded European Championships flew under the radar, which is bound to happen when there are 43 events contested in a seven-day timespan.

One swimmer in particular who stepped up and had the best meet of his young career was Switzerland’s Antonio Djakovic, who picked up a pair of silver medals in the men’s 200 and 400 freestyle.

Djakovic first broke his Swiss National Record in the 200 free semis, clocking 1:45.32, and then challenged eventual champion David Popovici early in the final before ultimately finishing second in a time of 1:45.60.

But Djakovic had an even better showing in the 400 free.

The 19-year-old had set his previous best time of 3:45.82 in the prelims of the Tokyo Olympic Games to finish ninth, 14 one-hundredths shy of earning a swim-off to fight for a berth in the final (the eighth-place qualifier happened to be eventual gold medalist Ahmed Hafnaoui).

At the 2022 World Championships, Djakovic once again had a near-miss in the heats, clocking 3:46.90 to finish 10th overall, less than half a second off of making the final.

But at the European Championships on Wednesday, he found another gear.

After posting a time of 3:47.67 in the morning to advance third into the final, the Frauenfeld, Switzerland native dropped nearly two seconds off his lifetime best to win the silver medal behind Germany’s Lukas Maertens, annihilating his Swiss Record in 3:43.93.

In Tokyo, Djakovic went out fast, and in Budapest, he was perhaps too conservative on the front-half. In Rome, he seemed to find a happy medium in the final, managing to get out with the leaders and still close strong, ultimately posting the fastest closing 50 in the field at 27.10.

Having knocked almost two seconds off his Swiss Record from Toyko, Djakovic jumps up 29 spots in the all-time rankings, moving to 31st after previously ranking 60th, and also now ranks fifth in the world this year.

In an event where a sub-3:44 swim has frequently been all that’s required to get on the podium at the Olympics or World Championships (his time is faster than the bronze medal time from Tokyo, for example), Djakovic is now a bonafide medal contender moving forward, especially considering he is still a teenager.

The swiss swim on the men side is just insane, without a question they are the best after the traditional big 6.

Awesome swimmer! Following him since when he won in EJC. Keep going Antonio 😀