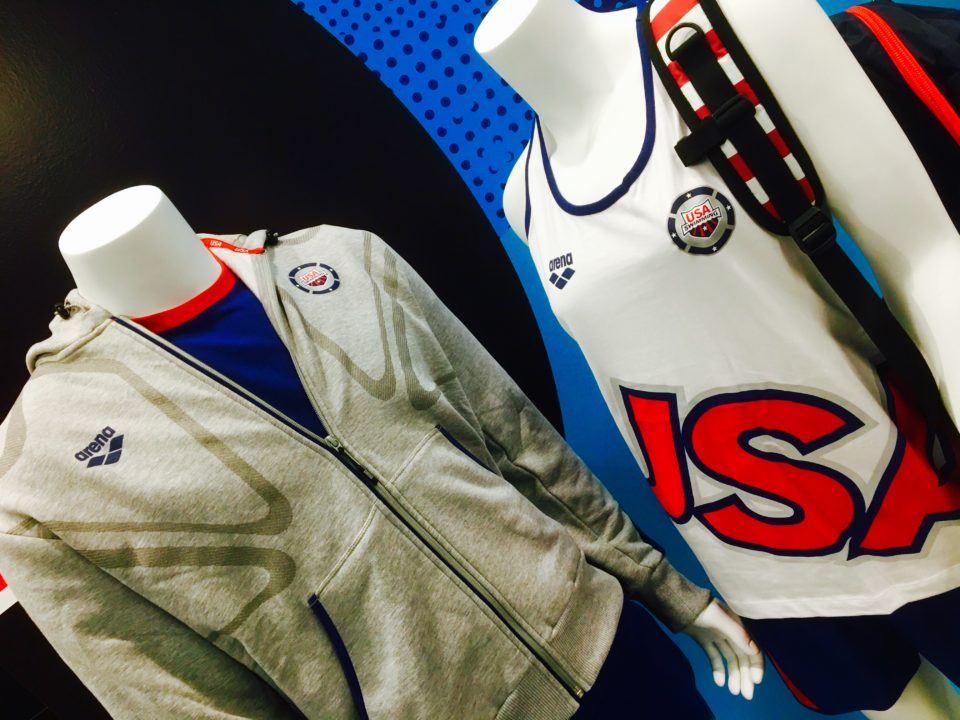 In celebration of the 2017 USA World Championship Trials, arena has unveiled the new National Team collection and is showcasing the line in the lobby of the IUPUI Natatorium – home of the 2017 Phillips 66 Summer National Championships and U.S. World Champ Trials. Current photo via GMM

In celebration of the 2017 USA World Championship Trials, arena has just unveiled the entirely new National Team collection and is showcasing the line in the lobby of the IUPUI Natatorium – home of the 2017 Phillips 66 Summer National Championships and 2017 World Champ Trials.  As the exclusive outfitter of the US National Team since 2013, arena has worked closely with USA Swimming to design and manufacture a custom designed apparel range to celebrate the country’s best swimmers and showcase the dominance and performance of USA Swimming on the international stage.

“When we became the outfitters of USA Swimming in 2013, we felt strongly about the need to outfit the National Team in deck wear that represented not just each swimmer’s individual accomplishments, but the accomplishments of USA Swimming as the world’s elite swimming federation” said Steve Ozmai, Marketing Director for arena USA.  “We could have easily just applied embroidery or heat transfers to existing team warmups, but we wanted our country’s athletes to walk onto the deck and into the international spotlight in arena’s best products.”

Arena unveiled the first exclusive National Team range at World Championship Trials in 2013.  The line underwent a complete refresh for all USA Swimming Olympians last year and has been completely re-engineered in 2017 for all international competitions.

“In Rio, we really wanted to showcase the quality of arena apparel, fabrics, and the finest Italian design, craftsmanship, and attention to detail.  We knew all eyes would be on USA Swimming and we wanted the athletes to represent their country in style with performance apparel that was beautiful and functional at the highest level” says Mark Pinger, General Manager of arena USA.

Designed with the latest in performance textile fabrics and silhouettes, the 2017 National Team range shares a very close resemblance to the Olympic Team’s Rio kit – something Mark says was his direction for the line from the very beginning:  “Both the team and the products exceeded all expectations and we knew immediately that our direction for 2017 had to draw influence from what the world saw on our National Team in Rio.”

For the first time in the governing body’s history, USA Swimming and arena are also making select styles of this apparel available to consumers via the arena’s website (www.arenawaterinstinct.com), retail kiosks at upcoming events, and key partners such as SwimOutlet – host of the official USA Swimming retail store.  In another first, fans and supporters of the USA Swimming will be able to purchase some of the exact same products their favorite National Team swimmers will be wearing at the upcoming World Championships in Budapest.  Available in the past via a distinct USA National Team replica range, the new 2017 retail offering will also include 100% authentic styles that are identical to the National Team’s issued outfitting.  According to Pinger, “We worked tirelessly to create the best possible arena National Team line and we want fans of USA Swimming to have access to that same high-quality product.”

Available now at the arena retail store in Indy, fans in attendance can get a jump on this exclusive offering by visiting the arena retail venue in the Fan Expo.  The rest of us will have to wait…but not long.  According to arena’s representative, the new range will be available online within the next week – just in time for you to show your USA pride as our NT heads to Budapest for the 2017 FINA World Championships!

Wondering if the Jr worlds team will have the same design

Wondering if the World Junior team will have the same design